Leading from the front 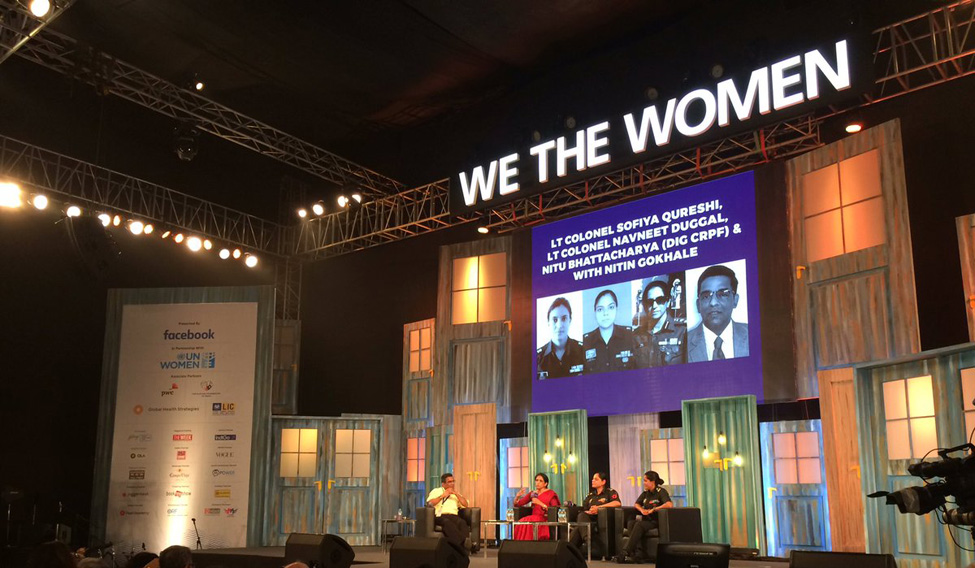 For Lt Colonel Navneet Duggal, the longest serving woman officer in the Army, life was not always easy. "I was 21 years old and it was my first posting. A jawan from my unit had committed suicide by jumping in front of a fast moving train, and his body was cut into pieces, " she said. "I was ordered by my commanding officer to collect the body and get it to the hospital for postmortem. Upon reaching the spot, believe me, it wasn't just me but my men too who were shaking. It was a gory scene; the body was so badly broken down that we couldn't bear to see it, leave alone touch it. But we had to put those pieces into a box before taking it to the hospital. The men were not ready to go closer. Being in charge, I had to go and touch that body first; unless I took the lead, they wouldn't follow. So I went and physically collected those pieces together one by one, with a lot of courage in the mind and numbness in my hands and fingers. After that incident, I couldn't sleep for the next ten days and called my parents over for support," she, a national level shooter, recounted.

She, along with Nitu Bhattacharya, Deputy Inspector General (DIG), CRPF and Lt Colonel Sofiya Qureshi, came together for an inspiring, high octane session on women in uniform at 'We the Women'—a two-day, participatory, open-to-all forum for women that got together diverse view points, concerns, challenges, and a celebration of all that women have achieved. Moderated by Nitin Gokhale, a veteran journalist and defence editor, the women shared their experiences—victories and dejections as they rose through the ranks and made a name for themselves in a space that is even today, dominated largely by men.

Nitu, who has served for more than 26 years in the Indian military and has authored the book, My Life, My Horizon, a collection of short stories based on women in conflict areas, emphasized on how a number of women in the Indian military are bagging lucrative positions for themselves and have done exceptionally good work in their official capacity across India's rural hinterlands. For instance, she spoke about Kamlesh Kumari who is from the CRPF, who stood between the militants and the citadel of democracy during the parliament attack in 2001 and was posthumously awarded the Ashok Chakra, the highest gallantry award, and Vimla Devi—the first woman to be awarded the sena medal for gallantry for her work with the IPKF. Light was also thrown on how the government facilitated the progress of fauji women in the internatinal arena, by sending a one thousand member strong CRPF women battalion, the world's first female formed unit, to Liberia as part of the UN peacekeeping force.

Navneet, who served in major conflict zones including the northeast, Jammu and Kashmir, and the western front, and also represented the army in the World Military Games back in 2006, said, as against popular assumptions, she never came across gender bias at any point during her tenure. In fact, according to her, she was always found in dangerous territories and tricky situations, and almost each time she was able to emerge much ahead of her male peers. "My commanding officer would often tell my male peers in jest, that i believe in her but I don't believe that you men will come back safe. I fought with my own mental and physical weaknesses and I take pride in saying that I served as an equal in Jammu and Kashmir, as well as in northeast," says Navneet.

When Sofiya was a lieutenant, she was posted in Nagrota in Jammu and Kashmir. The situation in the state at the time was such that it was on high alert as the army had just captured a terrorist and "things were very volatile", says Sofiya. She had been there only fifteen days and was a fresh graduate from the academy. One morning, her superior told her, in no uncertain terms, "Listen be ready; patrol is going to come and you have to check it." To Sofiya's mind this meant, "that I had to go on a patrol. So, I quickly brushed up my knowledge and went down to join the men who were leaving on a patrol. In the evening, I realized that everyone was looking for me. Upon reaching back, they clarified that the order was not for patrolling, rather for checking the petrol and diesel in the tanker, the moment it arrived. When the superior called me in his office the next day, I thought I'd be reprimanded, but to my surprise, he was impressed with my initiation and gave me the permission to join the paramilitary forces as a commando." She also narrated her aching experience of jumping through protocols, determinedly sticking out her guns to reunite a small girl in the western Congo with her parents who lived on the eastern side of the country.

All the three women present on the panel, who had their families sitting in the audience, spoke their heart out and all of them unequivocally acknowledged that it was no longer limiting to be a woman in India's defence forces, rather it was uplifting and motivating. Nitu, who happens to be the only lady officer in her batch said she had never experienced any form of gender based prejudice whatsoever, but admits that it still is psychologically tough for the men to take orders from a lady. "I was commanding a battalion in the jungles of Tripura in a place called Teliamura, and a man who was otherwise used to giving orders to women, suddenly found it very challenging to follow my orders, especially so, since he had to put his life on line on the basis of the stratedgy I make."

The session lasted for well over 25 minutes and was informative, insightful and interactive to a large extent. As a parting note, Sofiya adds, "The Indian army has progressed very well, the number of lady officers has grown from 22 in 1992 to 1500 now, and the Army has also provided women with increased number of permanent commisions too."