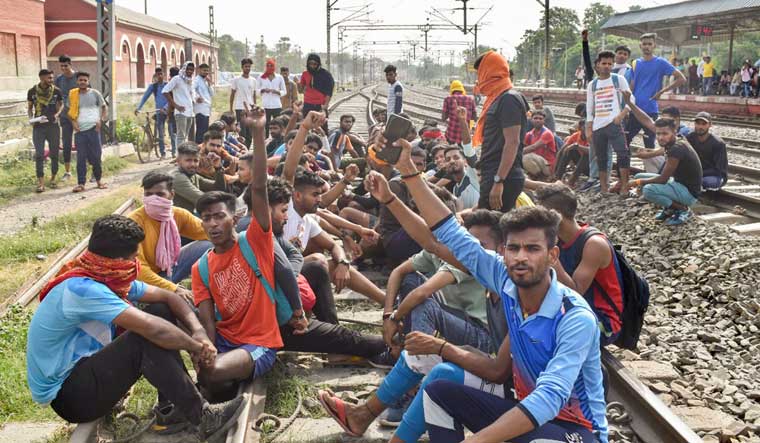 Youngsters sit on railway tracks to protest against the 'Agnipath' scheme, in Buxar | PTI

Even as protests continued across the nation against 'Agnipath' military recruitment scheme, the Centre, on Sunday, banned 35 WhatsApp groups for allegedly spreading fake news about the scheme.

Nonetheless, information about these groups or if any action has been initiated against their administrators was not immediately known.

The ban comes amid reports that WhatsApp groups are being widely used to mobilise support for protests in states like Bihar.

The government also issued a number— 8799711259—for WhatsApp fact-checking.

According to media reports, 10 people have been arrested for organising protests and alleged rumour-mongering.

Ruling out the rollback of the 'Agnipath' recruitment scheme despite widespread protests, the three services of the military on Sunday came out with a broad schedule of enrolment under the new policy and asserted that it was aimed at bringing down the age profile of the armed forces.

Meanwhile, the Congress said lakhs of party workers across the country will hold peaceful protests on Monday against the scheme. The protests is also against the Modi government's "vendetta politics" in targeting Rahul Gandhi, the party said.

The party, on Sunday, held a 'Satyagraha' in the national capital in support of those protesting the government's Agnipath scheme. Rahul Gandhi had appealed to party leaders and workers not to celebrate his birthday on Sunday. In a message to them, he had said Saturday night that the youngsters of the country were anguished and protesting on the streets and the Congress workers should stand with them.

Schools in Jharkhand will remain shut on Monday in view of the bandh called over the Agnipath scheme, officials said.

The ongoing examinations of classes 9 and 11 have also been postponed.

"In view of the bandh called by certain organisations, it has been decided that all government, as well as private schools, will remain closed on Monday," School Education and Literacy Department secretary Rajesh Kumar Sharma told PTI on Sunday.

"We do not want school students, especially those who travel by bus, to face any trouble. We have seen in Bihar that students were forced to get down from a bus as it was set ablaze."

Fresh dates for the postponed exams will soon be announced, he said.