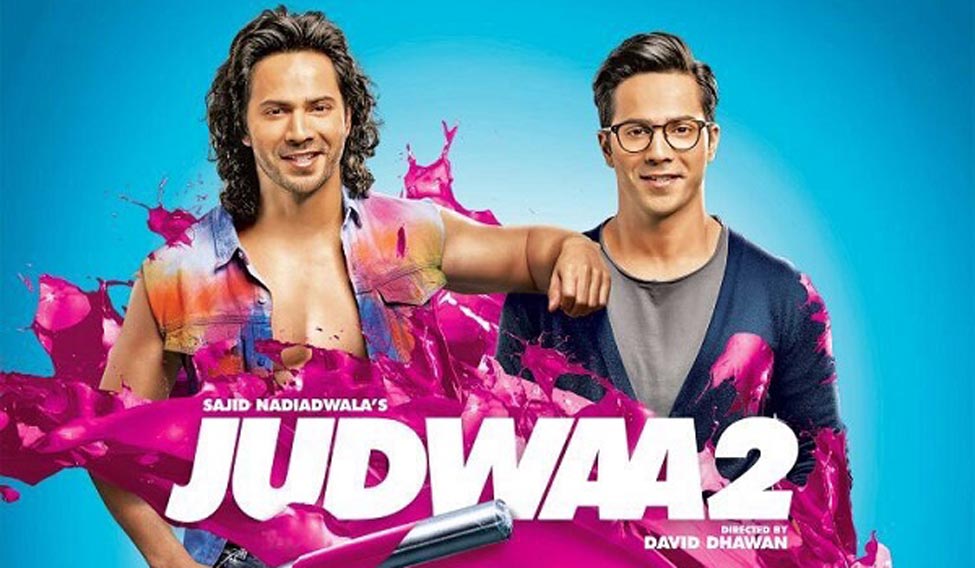 It took me a lot of effort to sit through this loud, in-your-face slapstick comedy. At the end of it, I felt spent and stupid. One reason that made me stick around post the intermission was that the film reminded me of my years growing up in the 1990s, humming 'tan tana tan tan tan tara' in my college premises. It reminded me of a young and perky Salman Khan and a svelte Karishma Kapoor who looked ravishing in the mini black leather dress she pulled off beautifully. But other than transporting me back in time, it had very little to keep me interested.

A remake of David Dhawan's much loved, Salman Khan-starrer Judwaa which released in 1997, this film fails to recreate the kind of buzz and magic on screen, which its predecessor had managed to do reasonably well even though it wasn't a runaway hit. This film comes across as nothing but a desperate attempt at containing Varun Dhawan's fledgling career, albeit with a lot of untimely action and dialogues and sequences that can best be termed as dimwitted. “Jo main bolta hoon woh main karta hoon. Jo nahin bolta woh WhatsApp karta hoon,” Really?! Although the tunes and music from Judwaa are incorporated into this film for the necessary impact and drama, it is the original numbers that make you cringe in your seat―“Ganpati Bappa Morya, pareshaan karen mujhe choriya.”

The film takes its basic premise from the original Judwaa, where Prem and Raja (yes, the original names of the protagonist are retained) are twins, who live in different parts of the world and don't know each other. Separated at birth, Prem grows up in an affluent family in London and is shy and reserved by nature, while Raja lives on the streets of suburban Mumbai and is bold and brazen. In special circumstances, they start to behave like each other, which means if one of them beats someone up or for that matter, kisses a woman, the other would also behave in the exact same manner irrespective of where or with whom he is at the moment. Moreover, this begins to happen, when Raja ends up in London too, by way of fraud and also as a way to escape the cronies of Alex (Vivaan Bhatena) whom he has seriously injured in a brawl.

The plot revolves around mistaken identity that also involves the ladies, Samaira (Taapsee Pannu) and Alishka (Jacqueline Fernandez). Both Pannu and Fernandez add the essential oomph factor in the movie and are merely reduced to sexy figures strutting around.

Varun Dhawan tries hard to get into the skin of his characters, but fails because the storyline itself seems to be misplaced in today's time and age. Although, on one hand, he does look convincing in the role of the raucous Raja, on the other, his naivety in the role of Prem appears fake and pretentious, and even plain stupid.

Johnny Lever is a delight to watch, as always, even though his screen presence is limited to hardly a few minutes. Rest of the cast doesn't manage to leave a lasting impression.

Also, the revamping of the original numbers, like Oonchi Hai Building, which was a rage in the previous movie, is a big letdown. To all those who haven't watched the '90s original, see it. I insist. That will definitely perk you up. And even if you're in the mood for PJs and some silly comedy, don't bet on this one.