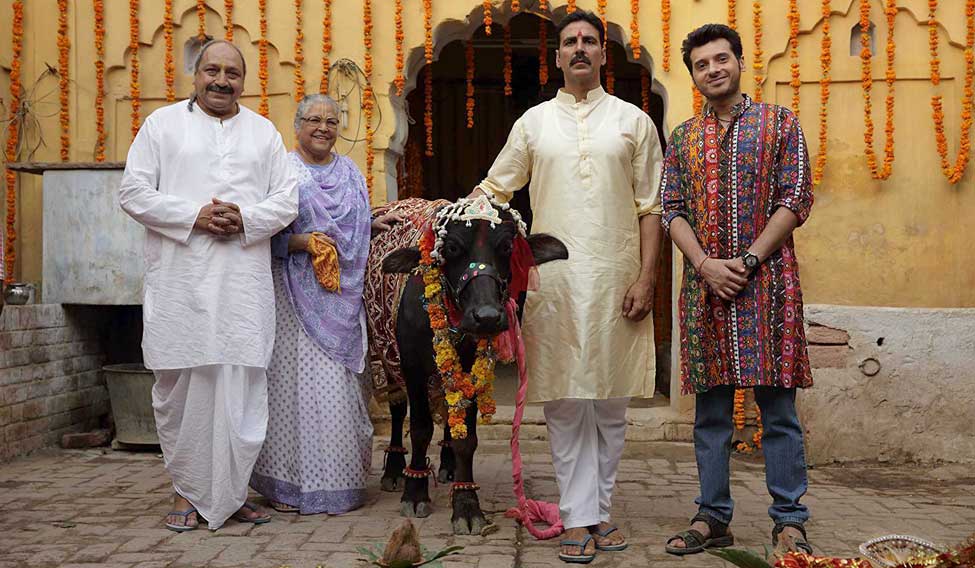 Based on a true story of a bride from Madhya Pradesh who refused to go back to her marital home until her husband got a toilet constructed inside the house, Toilet: Ek Prem Katha drives home the point, 'Biwi pass chahiye to ghar mein sandaas chahiye'. (If you want a wife, make sure you have a toilet.)

Set in the Uttar Pradesh countryside, the film is fast and gripping and beautifully captures the raging dichotomy between two families in neighbouring villages—one that is mired in orthodoxy and patriarchy belongs to Keshav (Akshay Kumar), a street smart and flirtatious, 36 year old, who runs a small cycle shop along with his younger brother Naru (Divyenndu Sharma). The other family, which nurtures free speech and liberal values, belongs to the highly educated, no-nonsense Jaya (Bhumi Pednekar), a fiery and liberal minded girl in her twenties who goes by the 'desi living, videsi thinking' mantra in life.

The duo fall in love and get married. It is then that Jaya realises the absence of a toilet in Keshav's house. It is in the wee hours of her first morning as a new bride, when a group of women on the way to relieve themselves, holding lanterns and water in lotas, beckon her to join in their 'lota party', that her world comes tumbling down. She is enraged upon learning that women defecate in the fields over gossip and chatter. Used to going about her ablutions in the privacy of her home, she feels humiliated and what happens next is what the film is all about. Even as Jaya demands a toilet in the house, Keshav's father refuses to pay heed to her demands, claiming it to be against his cultural and religious mores. At first, Keshav, too, refuses to acknowledge the absence of a toilet as a problem, and argues that women there have always been going about their deed in the fields and that she, as a daughter-in-law, should adjust.

However, he soon buys into the idea, thanks to his educated wife, and from then on, it is about his relentless journey of getting everyone else, starting from his father, into accepting that there is indeed a "need" for a toilet.

Even as he serenades a girl less than half his actual age, Akshay Kumar, who will soon celebrate his 50th birthday next month, gives a convincing performance and is a delight to watch in the role of Keshav. He manages to straddle between moods—funny, silly and serious—with a nonchalance that is so peculiar of him.

For instance, when the reporter in the film asks him, "Kya aap apne talaak ko lekar dukhi hain?," a straight-faced Keshav promptly replies, "Nahin ji maza aa raha hai." Bhumi Pednekar is fierce on screen and has an efficacious dialogue delivery. She has, most definitely, stolen the show once again, after her big Bollywood debut in Dum Laga Ke Haisha. Divyenndu Sharma, who plays the role of Naru, keeps the audience in high spirits with his extremely hilarious dialogues and expressions. Most of all, Sudhir Pandey, in the role of Bauji (Keshav's father), looks every bit the part—a religious bigot, who is incapable of accepting change and moving with the times.

While the film, written by Siddharth Singh and Garima Wahal (of Goliyon Ki Raasleela Ram-Leela fame) manages to keep the audience riveted by way of well-crafted and pointed dialogues, at times it does get a bit awkward. Sabhayata, Sanskriti and Shauch are words used with abandon, so much so that it almost becomes repetitive after a point. As the 180-minute film progresses, one realises the in-your-face pro-government propaganda, which makes its presence felt strongly by the second half. 'A big toilet scam' is referred to have happened four years ago (which means before the present government came to power). A laudatory reference is made to demonetisation and Swachh Bharat Abhiyan is talked about at large. All this only dilutes the message that the film aims to convey and seems completely unnecessary.

Given that millions of Indians defecate in the open, the theme of the film is not just apt, but also timely. However, it could have been dealt in a much better, rather neutral manner. Yet, it is worth a watch, especially for those hilarious dialogues peppered throughout the film.