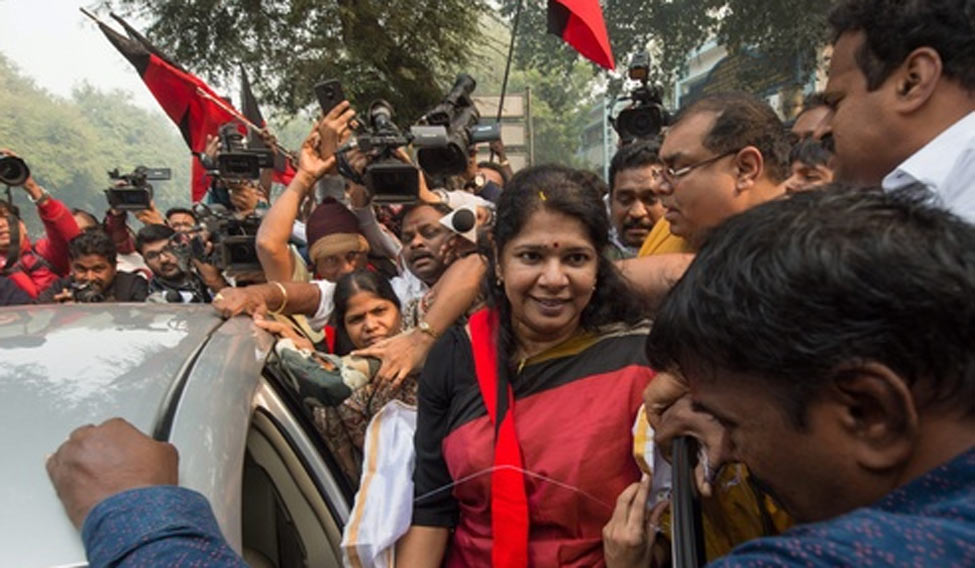 Kanimozhi leaving the court premises after the 2G verdict | PTI

For the DMK, which lost three majors elections since 2011 on account of the corruption tag, the 2G verdict is a huge shot in the arm.

The political impact of the verdict of a CBI special court in Delhi in the 2G Spectrum Scam is a huge shot in the arm of the DMK, which has been out of power in Tamil Nadu since 2011 and was reduced to zero seats in the Lok Sabha in 2014. The political implication of the judgement was apparent immediately after the orders were passed by special judge O.P. Saini. The DMK cadres were seen celebrating outside the court premises in Delhi and at the party headquarters in Chennai. DMK’s working president M.K. Stalin was seen distributing sweets to the cadres and his party seniors at the party office in Chennai.

With the court acquitting all 28 accused in the case including former telecom minister and DMK’s organising secretary A. Raja and Rajya Sabha MP Kanimozhi, Stalin described the 2G verdict as "historic." Recalling that the case was filed in 2009, he said it was a "planned (attempt) to insult and finish off a party in political history (of the country). It is a matter of joy that all of them have been acquitted," he said.

Coming out of the court premises, a beaming Kanimozhi thanked everyone who stood by her. “We will take this to the people of our state,” she said. In a detailed statement issued after the 2G verdict was pronounced, Kanimozhi said, “I have always believed that I would see light at the end of the tunnel. I have been waiting these last six years for this. The last six years have been harrowing to say the least. To be falsely accused in a case for a notional loss of Rs. 176,000 crore to appease the opposition that was stalling Parliament, is atrocious.”

For the DMK, which carried the burden of being '2G scam tainted' since 2009 and which it could not get rid off till now, the court order would help clear the taint.

The DMK lost in 2011 and had to bow to the Congress for ensuring an alliance by shedding 63 out of 234 seats. The DMK-Congress relationship then soured, but the two parties came together in 2016. In fact, the DMK was routed in the 2014 Lok Sabha polls in Tamil Nadu as the 2G scam and the Rs.176,000 crore corruption allegation was a tool for the opposition.

And given the state of political flux in Tamil Nadu, the DMK can go to the people as a 'clean' party and say its hands are not tainted like the AIADMK, as former chief minister Jayalalithaa’s close aide Sasikala has been convicted in the DA case.

The DMK is certain to have a nose ahead in the electoral battle for the 2019 Lok Sabha polls. The DMK, which has already been opposing the ruling AIADMK for corruption, will now have a free hand to go hammer and tongs against the Edappadi K. Palanisamy government in Tamil Nadu and look for a big victory in any snap election if the ruling AIADMK collapses because of its inner bickering.

But as of now, the DMK, though maintaining a friendly relationship with the BJP, will go with the Congress. And Stalin, by all means, will ensure that the Congress comes in line with the DMK. The Congress cannot drive any more hard bargains like in 2011.

And within the DMK too, the equations in the party and the family are likely to change. Stalin, who is now the working president and who leads the party, might soon accommodate his sister Kanimozhi.

Sources say Kanimozhi will now get a prominent role in the party. On the other hand, Stalin will try and establish him as the strongman not just within the party and the family but also as a strongman of the regional parties in the South.

“After the victory, the biggest task on hand for the DMK is to rebuild Tamil Nadu, which had been demolished to the ground by years of misrule by the AIADMK,” says DMK MLA T.R.B. Rajaa.

Apparently, the judgement has given an opportunity for Stalin to prove his leadership mettle and take the party forward after his father M. Karunanidhi.