With PM Modi on stage, Stalin says Tamil should be made official language like Hindi

Modi says Tamil language is eternal and its culture global 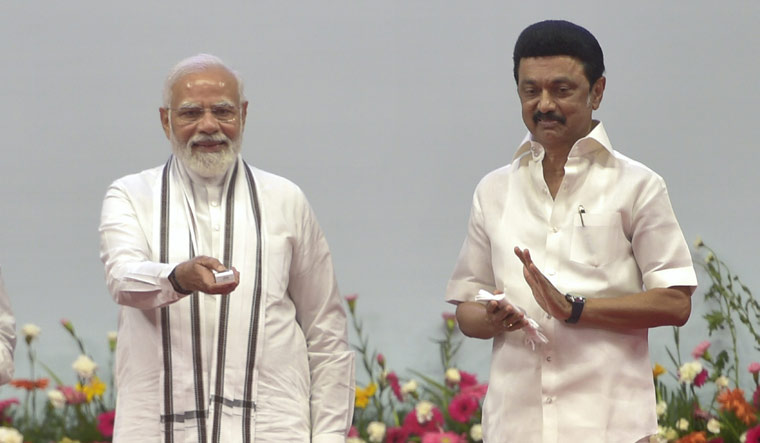 Prime Minister Narendra Modi on Thursday praised Tamil Nadu as a special place. He lauded Tamil language as eternal and its culture as global, while launching developmental projects worth Rs 31,000 crore in the state.

Modi was on an official visit to Chennai on Thursday for the first time ever since the DMK government under M.K. Stalin took over. While the state BJP looked at Modi’s visit as an opportunity for a show of strength, the DMK and Stalin used it as an opportunity to demand state's rights and advocate federalism.

While pointing out on the pending GST dues and asking the Centre to increase its fund allocation to Tamil Nadu, Stalin said that the state contributes 6 per cent of the overall growth of India. Stating that Tamil Nadu’s contribution is very crucial to India’s development, Stalin said the state’s share in India’s GDP is 9.22 per cent. The state's share in the overall tax income of Union government is 6 per cent and it also constitutes 8.4 per cent of India’s total export.

“The Union government must increase its contribution to schemes and fund allocation to do justice to the contribution lent by developed states like Tamil Nadu in the country’s development and economy. Only then will the true spirit of co-operative federalism be upheld,” Stalin said.

Stalin’s speech received huge applause when he used the term “Union government” instead of “central government”. Though the BJP in Tamil Nadu had been objecting to it, the DMK reiterates the fact that “India is a union of states”. Explaining his “Dravidian Model” of governance to Modi, Stalin pointed out that Tamil Nadu’s is a unique development model as it is not just based on economic growth but also includes social justice, women development and equality.

Stalin’s assertion on Tamil as the official language in Union government offices came in the wake of a controversy after Home Minister Amit Shah’s statement that Hindi should replace English as the country’s “link language”.

Meanwhile, Prime Minister Narendra Modi in his speech praised Tamil Nadu as a special place. He lauded Tamil language as eternal and its culture as global and asserted that his government was committed to further popularising Tamil language and culture. Underscoring the National Education Policy, Modi said technical and medical courses can be pursued in local languages and youngsters from Tamil Nadu could benefit from this. Modi also said India is providing all possible support to economic crisis-hit Sri Lanka including financial, fuel, food, medicine and other essential items and recalled that he was the first Indian Prime Minister to visit Jaffna earlier.