Where are we headed to? Euphoria leading to utopia, or hysteria leading to havoc? History tells us that no ‘dictator’ has led a nation to utopia. Rather, anointment of dictators through mass hysteria has only led to mayhem.

There was mass frenzy in Germany when Adolf Hitler grabbed power in his mid-40s. A similar atmosphere saw another gentleman in his mid-40s grab power in Delhi.

Students of history will recall the mass public ceremonies associated with the anointment of Hitler as 'Fuehrer'. Delhi's maidans, too, witnessed similar scenes as the Aam Aadmi Party ascended to power.

However, all its promises of swaraj, people’s participation, dialogue, answerability and open democracy have been left by the wayside in pursuit of absolute power. The AAP, which made many allegations on the funding of other parties, is the only party to not have submitted its accounts vis-a-vis the 2014 Lok Sabha elections. The party also refused to answer questions on its Rs2 crore 'midnight donations', and allegedly used muscle-power to muzzle dissent. Shades of Hitler’s brownshirts! 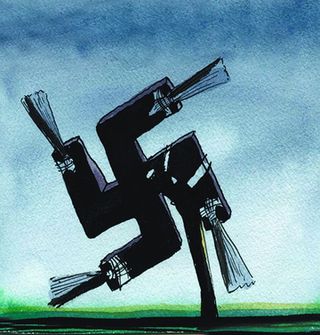 While Arvind Kejriwal rode to power on the back of tall promises, the first 60 days of his government have seen nothing but tamasha, resulting in heartbreak for those who believed that a messiah had descended. They have been awakened by a nightmare of absolute mobocracy anointing a dictator. How else would one explain the recent disillusionment within the AAP camp? One supporter has demanded back the symbolic blue Wagon R car he had donated to the party, another has asked the party to stop using the 'broom' logo, which he had designed.

This spurt in volunteer anger is self-explanatory. The stench of arrogance is reeking in the Aam Aadmi Party. Cases in point being the appointment of AAP volunteers as anti-corruption 'officers' to harass the nonbelievers; the sting-king being stung on use of abusive language; stung again on having a communal mindset; appointment of 21 ‘ministerial’ parliamentary secretaries; removal of the internal lokpal in a dictatorial fashion lest he should question the autocratic behaviour of the messiah; and, of course, the unceremonious chucking out of founding members from the party's national executive.

And, if all these were not enough, reports of women not finding a voice in the party were substantiated as no woman was chosen for a ministerial berth in the Delhi government, and the only woman member of the national executive resigned as she felt “volunteers have been betrayed”.

Even at the ground level, there are allegations that the AAP government was providing space to criminal elements, and that the party’s volunteers were involved in beating a man to death in a road-rage case in Central Delhi.

I bet none of this was on their much-hyped, full-of-doles manifesto. Nor were the ostentatious non-aam aadmi bungalows or the lal-battis.

The hope for the future of Delhi lies not in the current chief minister’s performance, but in the awakening of the masses to the reality of one person fooling all the people all the time.