Spending ten days in silent meditation may sound indulgent, but it wasn’t for me. I recently went for vipassana, a practice so ancient that it was rediscovered by Gautam Buddha.

It again disappeared and was revived by a Burmese, whose disciple, S.N. Goenka, brought it back to India, and to the world. It is the simple practice of “seeing things as they are”.

For the first three days we did the anapana practice—observing our breath. It was arduous and my thoughts jumped like monkeys, from one to the other. The list of things-to-do kept getting longer in my mind. There were times when I would get an amazing idea about my film on Manto and it was frustrating not to have my gadgets, paper or pen to write them down. I was restless.

We were a group of 300 women, across social backgrounds and ages. No fee is charged for the course, so we were like bhikshus, waiting in lines for food and living off the organiser’s hospitality. My small room of 10x12 feet was a luxury, as most others had to share. Not speaking was the easiest part; in fact my senses became acute. Rustling of leaves on a windy morning, shuffling of 300 pairs of slippers at 4am or sounds of clinking steel utensils we ate in, were all heightened. I missed neither my voice nor anybody else’s! For the first few days, my fingers swelled up and my back ached from hours of sitting in meditation, but by the fourth day all that was gone.

Despite being asked to make no eye contact, most of us looked around, at least initially. I began to recognise some of the women by their footwear as our eyes were lowered! I made a mental note of the ones I wanted to speak with, once out of silence. But gradually, in the absence of any gaze, I was truly with myself. I often thought about my son, now five, at a stage where he subconsciously emulates the responses he sees around him. I remembered many instances when I have responded with anger, irritation or disdain; times when I blamed others for my reaction. I thought of my parents, friends, situation in the country—hours of thoughts that slowly gave way to what I was meant to do. 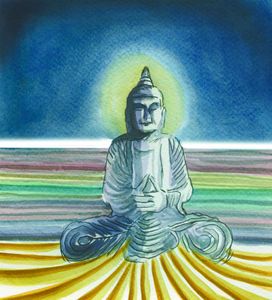 On day four, we were introduced to the actual vipassana practice—to observe every sensation in our body that rises and subsides, manifests and disappears. It was the process of realising the core essence of life that everything is impermanent. The idea was to replace the memory of anxious response with the memory of equanimous observation. While knowledge and critical thinking are essential to one’s growth, I began to understand that they are not sufficient for a deeper transformation. Our education and socialisation indoctrinate us into believing that intellect is supreme. Body has often been perceived in a superficial way, for its vanity and health, but not as the real recipient of all experiences. Moreover, in our naiveté, we separate body and mind but once we cease to see them in duality, the truth has a chance to emerge.

This brought me to a dilemma. If much of our work appeals to the mind, then how can real change occur? Where is the body, the heart in all this? But on digging deeper I realised that whenever something—be it a book, film or even a quote—inspires us, it is because it touches our emotional core and satisfies our intellectual curiosity. But, all this must produce sensations in the body that we are not in tune with. After all, when something resonates, our whole being is impacted.

Now the challenge is in continuing this slow and arduous process in the ‘real world’, till the old patterns fall by the wayside. This could easily take a lifetime. But, if I give up, it will remain an intellectual understanding and a talking point with friends. For now, a lot of unlearning has to be done for some learning to begin.