Whose language is it anyway?

Jashn-e-Rekhta, a two-day celebration of Urdu in Delhi, is what got me thinking more deeply about Urdu. Along with an overwhelmingly large audience of young people, I found myself at the venue from morning to night, listening to a stellar lineup of poets, writers, orators and performers. Having grown up in Delhi, I speak and understand much of Urdu and the rest I figure out because of the context and when I don’t, I simply enjoy the sound of it.

Recently a friend enlightened me that the analysis of the standard Urdu dictionary, the Farhang-e-Asfia, showed that 75 per cent of all the words in the dictionary were derived from Sanskrit and Prakrit. Additionally, all the base words of Urdu, its entire grammar and syntax came from Hindi. Similarly, modern standard Hindi emerged from Urdu through the replacement of its Persian and Arabic words with those derived from Sanskrit. All this basically means is that Urdu is of Hindi, just as Hindi is of Urdu.

Therefore, it would be fair to say that Hindi and Urdu are part of an overlapping continuum with Sanskritised Hindi at one end and Persianised-Arabicised Urdu at the other, with the middle occupied by a flexible and living language, which we have come to call Hindustani. But as it lacks a distinct script or a single literature, it never came to be seen as a real language.

We are conditioned to think in terms of Hindi vs Urdu, Nastaliq (Urdu script) vs Devanagri (Hindi script), and Hindu vs Muslim. It should hardly come as a surprise that a complex and shared linguistic and literary tradition gets simplified, polarised and eventually partitioned. The famous writer Saadat Hasan Manto ridicules the artificial Hindi-Urdu divide in a satirical piece in which two friends are arguing passionately about which is a better drink: soda lemon mix or lemon soda mix!

While researching for my upcoming directorial project on Manto, I noted that during his time, Urdu was hardly the exclusive preserve of the Muslims. Several Urdu writers of that time were Hindus and Sikhs, such as two great ones, Krishan Chander and Rajinder Singh Bedi. Nor did only Muslims write in the Nastaliq script, which was widely used in north India, especially in Punjab. Even today, many poets and writers like Gulzar, a Sikh by birth, write in Nastaliq, whether their works are in Urdu, Hindi or Punjabi. 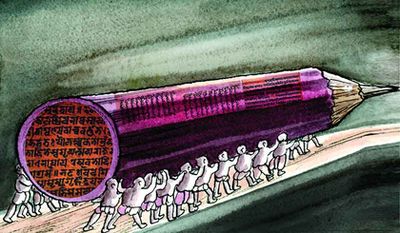 Languages typically belong to a region, and not to a religion. Kerala Muslims speak Malayalam, Tamil Muslims speak Tamil and the ones in Assam speak Assamese. One of the many gifts of the British and the right-wingers is that they have made us believe that a language can be divided on religious lines. But we must not forget that Bangladesh, a Muslim nation, got its freedom from Pakistan in 1971 on the basis of its language, Bengali. The attempt to impose Urdu over Bengali was soundly rejected by its “Muslim” people.

In the opening credits of the film Jodhaa Akbar, the name of the film appears in a combination of Devanagri (when writing the word 'Jodhaa') and Nastaliq (when writing 'Akbar'), notwithstanding the fact that neither Hindi nor Urdu had even come into existence at that time. This exemplifies how Hindi is seen in the popular imagination as the language of the Hindus and Urdu that of the Muslims. If we continue to seek differences rather than common grounds, then the result will be a relentlessly self-fulfilling prophecy.

Urdu is a mongrel language with its roots in a cosmopolitan ethos. It is a language adopted by Sufi saints, bhakti singers and mostly by ordinary people. Despite decades of communalism that has made Urdu the language of the Muslims, and worse, the language of the 'enemy' nation of Pakistan, the love for Urdu continues. I was glad to be part of those thousands of people, from various and diverse backgrounds, who thronged to Jashn-e-Rekhta, to celebrate Urdu, subverting the notion that it belongs to any one community.
editor@theweek.in