The colour of prejudice

It hasn’t been all that long since we woke up to the horrific news of a mob that attacked three men of African origin in a metro station in Delhi. They had allegedly misbehaved with some women. Even if true, this response was nothing but racist. Many in the mob gleefully filmed the ‘show’ and put it up on YouTube for us to see. I endured it with an open-mouthed shock in the hope that some spark of humanity would emerge somewhere. But, there was none whatsoever.

In a daze, and as always crunched for time, I got ready to go to my class on ethics, by Shelly Kagan, the eminent philosophy professor here at Yale. It was eerie that the class was about why onlookers choose not to intervene, in situations where they could actually prevent an atrocity. According to him, inaction is only a marginally less worse crime than an active one. I couldn’t help think what that would mean for us in India with its many casual and serious acts of cruelty.

A week has gone by, but neither have the images of that barbaric racism faded, nor have the questions they triggered. At a theoretical level, we may find many acts of violence unacceptable, but we still don’t do our bit to prevent them as our own deep racist or xenophobic notions surface, when scratched. Or, we simply accept discrimination as a reality and move on.

My exposure to the colour bias in India has increased manifold since I began actively supporting the Dark is Beautiful campaign. It is ironic that the dark skin is looked so down upon in a country where a vast majority is dark! In many parts of the world, it is seen as either being lowly, dirty, inferior and, at the very least, undesirable. So, it is no coincidence that the ‘people of colour’ have gone through relentless exploitation and subjugation. And, despite slavery being abolished in America and apartheid having ended in South Africa and structural and institutional provisions in place in almost all countries, it lingers on. 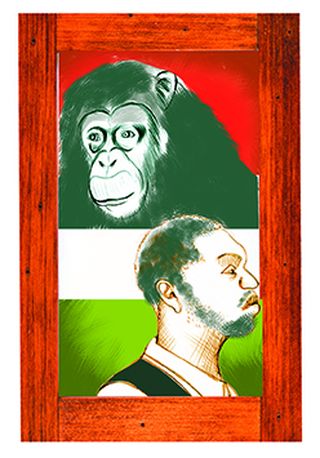 Yale University, an institution which is more than 300 years old, had an all-white demography for the longest time. I was quite surprised to know that there are only 113 African students at Yale out of 12,109. I heard an African student was told, “You must feel like Alice being here at Yale.” The girl didn’t understand the reference, as Alice in Wonderland wasn’t the story she grew up with. Often people make presumptions when they aren’t mindful of other cultural universes that exist beyond their own. While the comment was meant to be a compliment, it was obviously patronising, and, more tragically, not far from the truth!

Exclusion, stereotyping, prejudice, discrimination―it is all there and often not so subtle. A recent Newsweek cover story featured an image of a chimpanzee with the title “A Back Door for Ebola: Smuggled Bushmeat Could Spark a US Epidemic”. The Washington Post published a response to this offensive take: “Far from presenting a legitimate public health concern, the authors of the piece and the editorial decision to use chimpanzee imagery on the cover have placed Newsweek squarely in the centre of a long and ugly tradition of treating Africans as savage animals and the African continent as a dirty, diseased place to be feared.” In fact, Dr Joia Mukherjee, a professor at Harvard Medical School, attributed the slow global response to the ebola outbreak to racism.

The more I delve into the subject, the more horrified I am to see how omnipresent racism is, showing its ugly face in different forms. As I struggle with the recurrence of the fundamental questions of discrimination, at a personal level, it boils down to prejudices and biases. It is only in confronting these hidden spots that I feel we can make our own journey towards equality and justice. The horrifying images of those three men, beaten in a city I grew up in, will be a constant reminder of all that needs to be done.