Lest the eyes adjust

2016 has not been perceived as a good year and for good reasons. And, therefore, 2017, even though an arbitrary marker, brings with it hope and promise. Yet, for it to be better, we will have to come together in ways that we perhaps failed earlier. After all things don’t get better on their own.

Many of us are still reeling from the events of November 8—Donald Trump winning the American presidential election and closer home, the sudden demonetisation of 500 and 1,000 rupee notes. Though as the days pass, we seem to be accepting the new reality. Measured by how much it was shared on social media, the danger is best captured by the lines of The New Yorker writer in China, Evan Osnos. He wrote: “What is the precise moment, in the life of a country, when tyranny takes hold? It rarely happens in an instant; it arrives like twilight, and, at first, the eyes adjust.”

Is accepting the new normal inevitable? Is it the only choice? Many of us feel too disempowered to make a difference. But then we are also quick to say “we get what we deserve”, acknowledging our role in what we are subjected to. Do 66 million people who voted for Hillary Clinton (almost 3 million more than Donald Trump in popular vote) deserve Trump? And do the millions of Indians who are having to pay a heavy price for a supposed clean up of the black money deserve such disruption in their daily lives?

The world over, these days, the new distraction from real issues is being called nationalism. And any opposition to politics of divisiveness is being systematically accused of being anti-national. Even those who are truly and deeply impacted, queuing endlessly for hours at bank branches or ATMs, are accepting this for the greater good of the country. Even two months after the demonetisation, the government has not presented a well-argued, quantified cost/benefit analysis nor has any regret been expressed for the shoddy implementation. 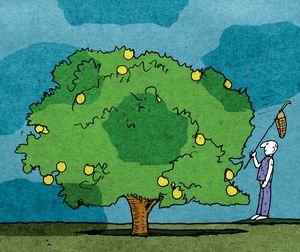 Some will argue that in the long run Trump is good for America and demonetisation for India. Both are highly debatable. But my focus here is our response as an average citizen to our collective suffering. How we respond is all we control, but that, in turn, determines the future actions of those in power. If I could paraphrase what Paul Krugman, the Nobel laureate for economic science, recently wrote in his blog, for things to change enough people will have to take a stand. Playing it safe is betraying not only your country, but also humankind.

The situation in the two countries in question, at best, has become the new normal. Trump continues to make incendiary statements and recruiting questionable heads of departments, defying all good sense. Closer home, the rationale for demonetisation has shifted from black money to a push for cashless society, making it clear that the roadmap was not really thought through. And despite all the media noise and some on ground protest and lots of good analytical writing, the fact is that we have not made it any harder for the government to make high-handed decisions.

How much harm will be done before we gain the strength to resist what Prof Amartya Sen describes as despotic decision-making? We are so entangled in our own pursuits and problems that anything beyond seems difficult. Also we feel inadequate and disempowered to fight the onslaught on our freedom, our rights. Some of it could be from a fear of putting one’s neck on the line and some simply be passivity, stemming out of the habit of not being engaged. It is already too late and the false calm must already be brewing another storm.

The least we can do is to never stop asking questions and demand accountability, or else we will be complicit in worsening the situation. If we stay silent, the voice of reason will not have a chance to be heard and our ‘eyes will adjust’ to the distortion.