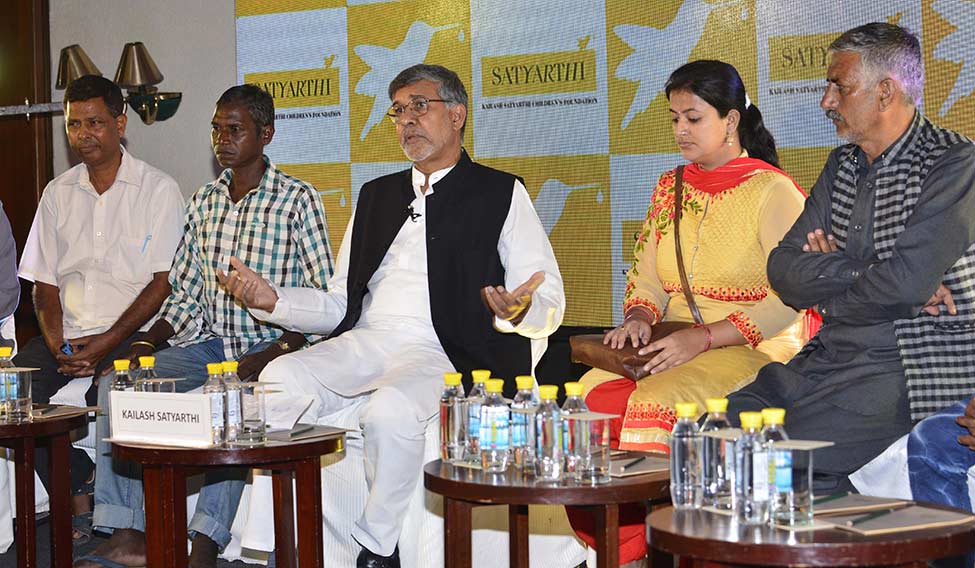 Friend in need: Kailash Satyarthi (third from left) with parents of sexual abuse victims at the launch of Bharat Yatra, his roadshow about child sexual abuse | Arvind Jain

Nobel laureate Kailash Satyarthi is launching Bharat Yatra, a roadshow about child trafficking and child sexual abuse. It will be flagged off from Kanyakumari on September 11 and will cover 15,000km across 22 states in 35 days. Satyarthi, who believes in the slogan ‘Surakshit Bachpan; Surakshit Bharat’ (safe childhood; safe India), has stepped up his campaign for child rights. His demand is an effective law against child trafficking. Excerpts from an interview:

Please elaborate about your latest project.

Actually, project is not a term I use. For us in this movement, it is a constant struggle to secure fundamental rights of children. Our 37-year-old fight against child labour and exploitation has indeed resulted in success, though much more needs to be done. Our focus now is on child safety. The sexual abuse of children is acquiring epidemic-like proportions, with 50 cases being reported every day. It seems no place is safe for children: slums, gated communities, schools, parks and playgrounds. As a society, we are not raising our voices loud enough against this atrocity. It is only when children are free from fear that India will have a future.

Recently, a ten-year-old rape victim delivered a baby in Chandigarh. The case was discovered too late, the courts rejected the abortion plea. What are your observations?

These are very sensitive issues and need delicate handling. Imagine the trauma of that innocent girl. Since many predators are family members or persons known to the family, it is often very late by the time such atrocities are discovered and reported. That is what happened with the victim in Chandigarh. While we need clear laws and guidelines, our priority must be to encourage abused children to speak out. Silence leads to more violence and more abuse. Our effort is to generate a mass movement in India to create awareness of this and encourage victims and family members to speak out.

There is an increasing reportage of cases where child sex abuse victims and perpetrators are both underage. Is this a new trend? How would you suggest society works towards sorting out such issues?

Once again, laws can deal with part of the problem. The long-term solution lies in sensitisation, both within families and in schools. Parents must become mentors and friends to their children; they must inculcate values. Within schools, sex education must be given a priority so that children are aware of the dangers they could face.

Do you think the Protection of Children from Sexual Offences (POCSO) Act of 2012 is adequate? What would you want changed in the law?

Laws become ineffective when implementation becomes an issue. It has been five years since POCSO became law. But the shocking reality is that only one per cent of those accused under this law have been convicted. Laws can evolve and be modified over time with feedback from law enforcement agencies, victims and those fighting for the victims. But, implementation is the key. After POCSO, the number of reported cases and investigations have increased. But, justice delivery continues to be abysmal.

Last year, almost 15,000 cases of child sexual abuse were registered, but resulted in only four per cent conviction and eight per cent acquittal. This means a terribly high 90 per cent pendency. I have been demanding the setting up of child-friendly fast-track and dedicated courts with a strong mechanism of victim and witness-protection. If we fail to ensure justice for victims of one of the most heinous crimes, how can we claim to be a moral and civilised society?