On December 8, US President Barack Obama called his “good friend” Prime Minister Narendra Modi to share his ‘Mann ki baat’ on the climate conference in Paris. The exact text of the conversation is not public, but India's role at the talks, which the US was perceiving as a “challenge” to quote its prime negotiator John Kerry, now morphed to facilitator.

Obama had made a similar call to his Brazilian counterpart earlier, but Brazil, having already joined the US-led high ambition coalition of 100 countries by then, was perhaps not perceived as so much of a challenge.

India has another good friend to keep happy, too: French President Francois Hollande, who backed the Modi-led alliance of solar powered nations. Hollande is chief guest at the 2016 Republic Day parade. With the French hosting the Conference of Parties (CoP) 21 meet, Hollande was naturally keen it ended positively, unlike previous meets where either the document was not ratified, or countries couldn't agree on a joint statement.

Global politics is as important as global climate, note observers. India, thus had to step down from its traditional stance of “historical responsibility”. India has been a fierce advocate of the view that the west, which had a two-century lead in industrialisation, has been polluting the world for that much longer, and thus, has a historical responsibility to clean up the mess. These two words now find themselves in a vacuum in the deal that the 196 nations finally agreed upon. The ramifications of the loss of those words are immense, experts point out, because everything now, from finance to technology transfer, will be read from the perspective of present capabilities and emissions.

The developed world has managed to get rid of all its past polluting burden. “The draft has further weakened the differentiation between developed and developing countries,” noted Prodipto Ghosh of The Energy Resources Institute (Teri). “The vacuum left behind by these missing words will keep coming back to us,” rued Jyoti Parikh, executive director, Integrated Research and Action for Development (IRADe), one of the organisations that helped formulate India's Intended Nationally Determined Commitments (INDC) before CoP 21. “The world will now only see rising emissions, not the cumulative ones. But in absolute terms, their emissions will be higher than our rising ones, and they will get away.”

Historical responsibility was a deal breaker for the west; Kerry, at one time during negotiations, threatened that developed countries would walk out if asked to commit on differentiation of financial obligations. “Legally binding (the deal) with respect to finance is a killer for the agreement,” he had said. “We have, in the spirit of compromise, agreed on a number of phrases in the agreement,” said Prakash Javadekar, Union environment minister.

The consolation, however, is that India managed to get a lot of other words inserted into the document, including its pet Common But Differential Responsibility (CBDR), as well as “equity”, “sustainable lifestyle”, “consumption” and “climate justice”, thus ensuring space to fight in future. “But now, the fight will be to save itself, as there will be more demands on India (to cut its carbon emissions),” noted Chandra Bhushan, deputy director-general of the think tank Centre for Science and Environment. Again, certain words like climate justice, sustainable consumption and production sound promising, but they are rendered impotent as they are not in the operational part of the deal.

Modi, in his inaugural remarks, had made a vehement pitch for the west to vacate its carbon space, giving the chance to emerging economies like India to develop. Given that carbon space (the amount of further CO2 the world can produce without triggering off an irreversible catastrophe, calculated at 1,000 gigatonnes) left is limited, and the word “Carbon Budget” finds no mention in the draft, India will now have to fight to emit every puff of CO2, said Bhushan.

CO2 emissions are still the yardstick of development, as energy from renewables and non-fossil fuels hasn’t scaled up to a level to eliminate coal altogether. In countries like India, where green technology is still not available, or is very expensive, or hasn't been scaled up, the future of growth is in carbon, notwithstanding an ambitious INDC of making renewables account for 40 per cent of its energy consumption by 2030.

There are many who feel India lost a historical opportunity to press for a stronger and more binding deal. “This time, we had a position. 126 countries had the same stakes as us, we were the voice that spoke of the challenges of all the developing countries. I fail to understand how, when we brought together Africa and the island countries, we didn't get the support we needed on carbon budgets and carbon space,” Bhushan said. The answer lies in the creation of the high ambition group, led by the US and EU, which managed to get several poor nations to join in, on the promise of striving to reduce emissions further. 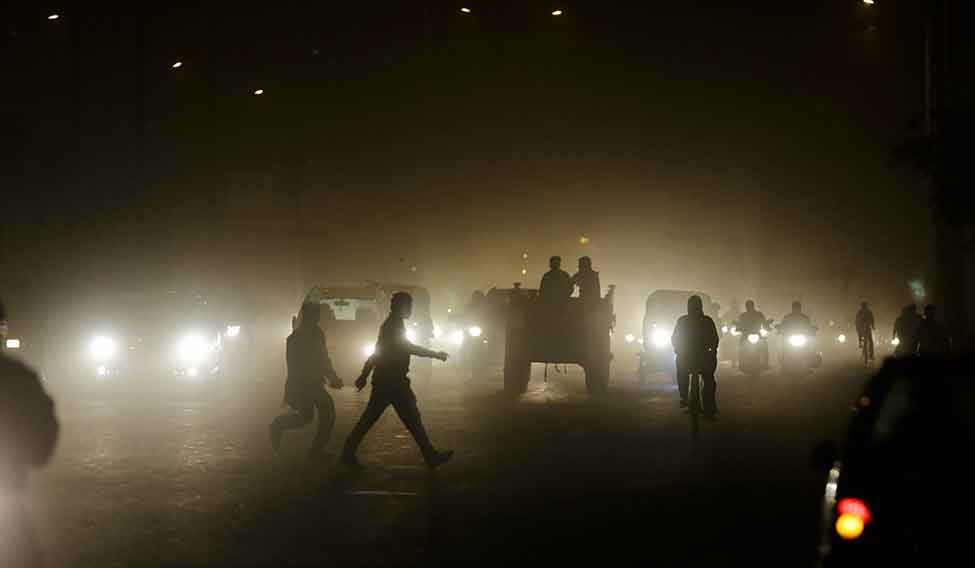 Delhi at night. The city's air quality is worse than Beijing, the world's most polluted city | AP

Obama had, before the meet, said that at least some part of the deal should be legally binding. In the final draft, only INDCs are in that space. “Everyone has to have INDCs and report on the progress with them,” Bhushan explained. But given that INDCs are a bottom-up approach and the provisions for a common monitoring and verifying process are not in place, the legal binding is rather weak. With no target for financial assistance to developing countries, the west could very well excuse itself from further financial liability by showing loans and even investments as part of their contribution to the hundred billion dollar climate fund. And given that the deal agrees on a voluntary carbon market to buy and sell carbon credits, advanced nations now also have opportunity to buy credits from poorer nations instead of lowering their own emissions.

The global consensus is that global temperatures shouldn't rise more than two degrees celsius above pre-industrialised times. Observers say that even if all the INDCs are sincerely met, the temperature rise trajectory is heading to a more than three-degree rise.

A positive outcome of the Paris meet was getting everyone to agree that the goal should be more ambitious, temperature rise should be kept at just 1.5 degrees C. But with few legal bindings on commitments, observers say, negotiators may have put together a draft high on intent, low on doability.

On the bright side though, said Parikh, we do have a deal now, something whose creation itself was under a cloud on occasion. “India has still emerged in good light despite the loss of words. In fact, nobody could say India was obstructionist; even Kerry only termed India a challenge. The deal marks a slightly more sincere effort than in the past towards mitigating climate change,” Parikh said. Also, Paris is not the end of the road, but the start of a new journey after Kyoto. “There will be four or five CoPs between now and 2021 when the INDCs will kick in. There is time to make alterations. None of that would be possible if there was no deal in the first place,” noted Srikanta Panigrahi of the environmental solutions organisation Carbon Minus India.

Getting nearly 200 nations—which range from highly developed economies to those which are struggling for basic electrification, from tiny island nations to those with multiple time zones—to agree on a roadmap for ensuring a green future is itself a very big deal. So while Javadekar was candid in admitting that the deal could have been more ambitious and that “the actions of developed countries are far below their historical responsibilities,” Modi preferred to see the bigger picture. His final tweet on the issue was: “Outcome of Paris Agreement has no winners or losers. Climate justice has won and we are all working towards a greener future.” As his dear friend Barack would say, “Senorita, bade bade deshon mein... you know what I mean.”

Climate for change
* 196 countries have agreed on an ambitious target of keeping temperature rise at 1.5 degree C above pre-industrial times. This will be through mitigation of carbon emissions.
* India had to forego its traditional stand on historical responsibility under pressure from the west. India has long held that countries which had a two century lead in industrialisation have greater responsibility than others to clean the mess.
* Formation of India-led solar alliance was hailed as a positive move at the meet Each country has formed its own mitigation goals, through its Intended Nationally Determined Commitments.
* The developed nations have managed to keep the financial commitments out of the ambit of legally binding, a big plus for them but not for the developing world.
* India succeeded in getting the draft to mention words like Common But Differentiated Responsibility, sustainable lifestyles and consumption. The carbon space Modi requested the west to vacate for developing economies did not happen.
* The deal is ambitious on intent, low in doability, feel most Indian experts.