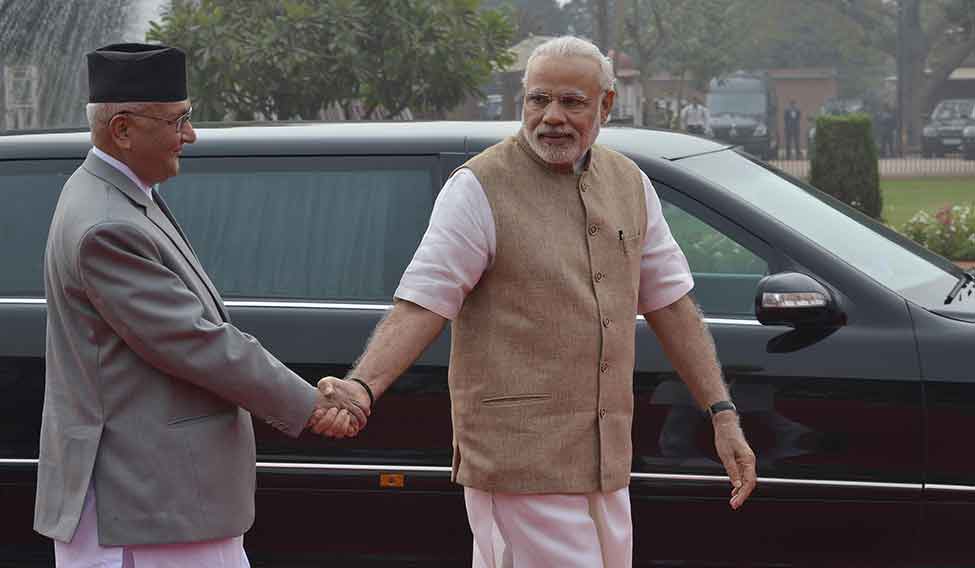 February 22 was Nepal Prime Minister K.P. Sharma Oli's 64th birthday and the 28th anniversary of his marriage to college sweetheart Radhika Shakya. But rather than accept good wishes, Oli was keen to give them out to the Indian establishment during the course of his six-day trip to India, which began on February 19. At every public function he attended, Oli emphasised just one point: “I come carrying good wishes. My main mission here is to clear the misunderstanding and apprehensions following the passing of our constitution.” At the end of the trip, Oli felt that his mission had been a “success”.

Bilateral relations between Nepal and bade bhaiya (elder brother) India was on the upswing after Prime Minister Narendra Modi's visit in early 2015 and following the phenomenal help and succour India offered to Nepal after the April 2015 earthquake. The relations, however, took a sudden hit in September after Nepal promulgated its constitution. The Madhesi population of the Terai belt, which has close family ties with India, felt sidelined and India dispatched foreign secretary S. Jaishankar to Kathmandu, to convey its displeasure.

The subsequent blockade of the border—by the Madhesis, as India insists, but orchestrated by India, as many in Kathmandu still feel—resulted in a bleak winter for Nepal as fuel shortage kicked in, along with a shortage of all other supplies. Nepal's economy is heavily reliant on India; two-thirds of its foreign trade is with India.

India, keen to find a solution to its diplomatic standoff with Nepal, gave its approval to the recent passing of two amendments to the Nepali constitution, which ensured better representation for the Madhesis. Within weeks, Oli was in Delhi on his first foreign visit as prime minister, keeping intact a decades-old convention. Whispers that he may choose Beijing over Delhi were put to rest, and the two siblings appear to have patched up amicably. Shunning the new trend of five-star hotel stays, Oli was invited to stay at the Rashtrapati Bhavan, again a gesture that reinforced tradition. “This was not a recriminatory trip, it was a forward-looking one,” said Jaishankar.

Though External Affairs Minister Sushma Swaraj took pains to explain the difference between the western notion of big brother and the eastern one of bade bhaiya (the latter, according to her, has concern and goodwill and is not a bully), the Nepali hurt was palpable beneath the surface. Oli kept a buoyant bonhomie, but his deputy prime minister, Kamal Thapa, said the passing of the constitution was a big achievement for the country, which had been aspiring for a people's document for over six decades. “There were 601 members from 37 parties in the Constituent Assembly with divergent ideologies—monarchists, republicans, federalists, Maoists and pro-hindutva ones. For all of us to finally agree [with 86 per cent in favour] on a document was a big achievement and it was natural for us to look at the world, especially India, for a pat on the back.” He said it took time, but “PM Modi finally acknowledged that the constitution is a great achievement for Nepal.” Thapa, however, admitted that the document was not perfect and would require amendments.

Clearing the air on citizenship, one of the contentious issues of the constitution, Oli said there was no fear of Indian women marrying Nepalis not getting citizenship. “We have just made citizenship a federal subject and not a provincial one, in line with most countries. In the last three months, 596 women married to Nepalis have got citizenship.”

Oli came with a big contingent, including 46 government delegates and 30 from the private sector, and he emphasised that it was time to take the roti-beti ka rishta (cultural and familial ties) to another plane of economic and strategic relations. “Nepal is planning several special economic zones in the Terai region, close to India. We are developing Pokhara and Lumbini as tourist hubs,” he said, inviting Indian investors. Nepal is on the brink of rapid economic growth, which will be driven primarily by power. So, the inauguration of the Muzaffarpur-Dhalkebar transmission line by Modi and Oli was a significant event. The line has potential for two-way transfer of power in future. The two countries signed letters for the use of Visakhapatnam port for imports to Nepal. At present, Kolkata is the only authorised port from India, along with Phulwari in Bangladesh. “Visakhapatnam is farther, but it is easier to access from all entry points on the India-Nepal border, unlike Kolkata where the transit route is only through our southeast entry point, so this is a significant development,” said Shyam Prasad Giri, a member of Oli's business delegation. India has also committed to making the police academy in Nepal.

Jaishankar said the word China did not crop up even once during the Modi-Oli talks though they spoke of bilateral and global issues. Oli, however, noted at a public function that Nepal was placed between the two Asian giants, who were making rapid economic progress, which could only benefit Nepal. “There is no question about aligning with one or the other. For us, it is not a viable policy. We will continue to have good relations with both. We see the opportunity to help forge a productive partnership between both,” he said. Radhesh Pant, chief executive officer of the Investors Board of Nepal, said his country was not “landlocked, but rather land-linked”, underscoring its location as a strategic one, rather than a vulnerable one.

Oli returned to Kathmandu with the assurance of $250 million, part of the billion dollar commitment India has made towards post-quake reconstruction, and a basket of investing prospects, from the east-west railway line in the Terai with crossover stops in India, to roadway development to building new airports and upgrading old ones in Kathmandu, Pokhara and Lumbini. “I am convinced that I have clarified [about the constitution] and that apprehensions do not persist anymore. That is the most important outcome of my visit,” said Oli.

In hindsight, was India's tough stance towards Nepal a diplomatic gaffe that has been sorted out, or was it Modi's smartest move? “We have only gained from our stand,” Abhay Thakur, secretary, north, in the ministry of external affairs, told THE WEEK. “We got the constitution amended and Oli made his first foreign trip to India. We are in a stronger position vis-a-vis our ties with Nepal than we were in September.”