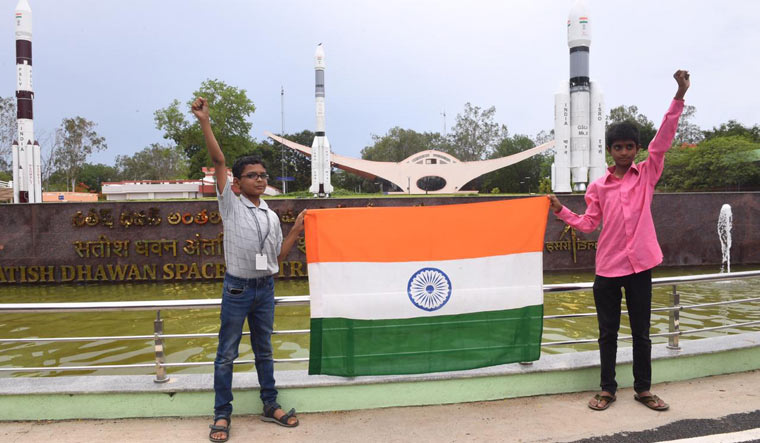 Monsoon clouds and intermittent drizzles notwithstanding, the excitement for the launch of Chandrayaan 2 this afternoon is building up.

Since early morning, people have begun gathering at the spaceport on Sriharikota. There's an air of excitement and merriment as they take selfies at a spot which has models of ISRO's various in-service rockets.

Everyone has their fingers crossed (who said there is no superstition in rocket science?) that this time the take off happens successfully. The mission was aborted on July 15, an hour before take off, with a technical snag being detected. The snag had occurred when the liquid propellant was being loaded into the rocket's indigenous cryogenic upper-stage engine. Veteran scientists had heaped praise on ISRO for calling off the launch rather hurrying into a major disaster.

Even away from the spaceport the excitement has gripped the nation, with Chandrayaan 2, aimed at landing a rover on the unexplored Lunar South Pole, bring the top trending subject on Twitter.

There is 70 per cent chance of rain around the take off time. The rain is not likely to hamper a launch unless it's of the scale of a cyclonic storm. But it can certainly mar the viewing experience.

At the launch pad meanwhile technicians are filling liquid oxygen for the cryogenic stage of the flight. Earlier, the fuel for the liquid stage was filled. The countdown for the launch began at 1843 on Sunday.

ISRO said Saturday it has completed the launch rehearsal of GSLV Mark III-M1, the launch vehicle of Chandrayaan 2, and its performance is normal.

(With additional inputs from PTI)