'NASA was successful because the spacecraft was launched on 'Ekadashi' day' 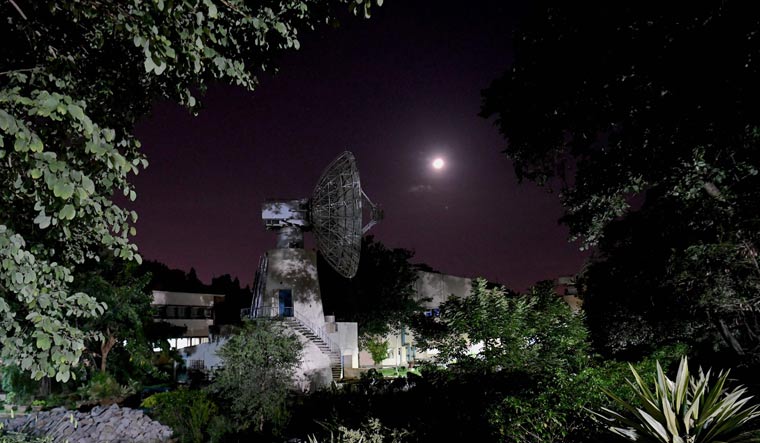 A radar scans the skies with the moon in the background at ISRO Telemetry, Tracking and Command Network (ISTRAC) facility, on September 6, 2019 in Bengaluru | AFP

The 39th attempt by the NASA to send spacecraft to the moon was successful because it was launched on 'Ekadashi' day as per the Indian system of time, Hindutva leader Sambhaji Bhaide claimed on Monday.

"America attempted to send their spacecraft on the lunar surface 38 times earlier but failed on all those occasions," Bhide said while speaking at an event in Solapur.

Bhide, a former RSS activist who heads the Shiv Pratishthan Hindustan in Maharashtra, is an accused in the January 1, 2018 Koregaon Bhima caste violence case. However, he was never arrested.

He was referring to Indian Space Research Organisation's (ISRO) ambitious goal of putting Chandrayaan-2's 'Vikram' lander on the lunar surface. On September 7, the lander hard-landed on the moon surface after the control station lost contact with Chandrayaan-2 when it was closer to the lunar surface. ISRO is still continuing all efforts to establish link with the lander, which is lying in a tilted position.

Bhide further claimed that following the repeated failures, one of the American scientists suggested that the Indian system of "time measurement" be adopted in place of the system followed by them.

"To all their surprise, the Americans succeeded in sending their spacecraft to the moon in the 39th attempt which was based on the Indian time measurement system. They were successful because the spacecraft was launched on the day of 'Ekadashi'," he added.

'Ekadashi' is the eleventh lunar day (tithi) of each of the two lunar phases which occur in a Hindu calendar month - the Sukla Paksha (the period of the brightening moon also known as the waxing phase) and the Krishna Paksha (the period of the fading moon also known as the waning phase). In Hinduism and Jainism, Ekadashi is considered a spiritual day and is usually observed by partial fast.

Not new to controversies, Bhide had claimed in the past that a number of couples were blessed with sons after eating mangoes from his orchard.

"Mangoes are powerful and nutritious. Some women who ate mangoes of my garden have given birth to sons," Bhide had said in Nashik.