The excitement was tingled with tension at the Mission Control Centre 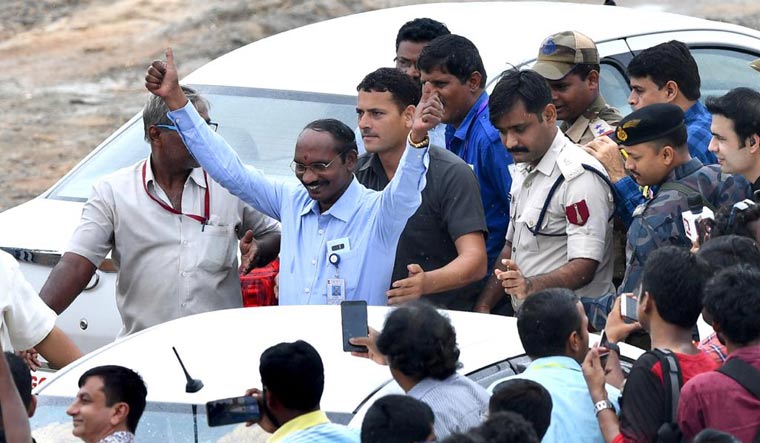 In the end, the overcast sky was a boon, providing the perfect backdrop to witness the mighty Bahubali, or GSLV Mk III, fire off into its first operational flight, carrying with it Chandrayaan 2, India's second lunar probe.

Since it was a daytime launch, a brilliant sun could have lessened the visual delight, too see which the spectator gallery was brimming over.

All those who had their eyes on the countdown clock heaved in relief when it passed the 56.24 minute mark, at which the countdown had stopped on July 15.

This time though, the countdown that could be heard over the public announcement system was reassuring, as if kept tickling off the various parameters.

The excitement was tingled with tension at the mission control centre, where ISRO's team sat with its special guests—former chairmen K Radhakrishnan and AS Kiran Kumar, spiritual leader Jaggi Vasudev (popularly known as Sadguru) and principal scientific advisor to Government of India K VijayRaghavan.

So when the rocket roared forth from the tree line, there was  applause among the public, who had waited hours for that few seconds long show,  after which the rocket was engulfed by the clouds.

For the scientists though, the applause came much later, 16.30 minutes after take off when the probe was inserted into the earth orbit.

ISRO chairman Sivan then announced that it had reached six thousand km beyond the orbit intended, which was doubly good news since it would reduce the number of manoeuvres to raise the orbit, and thus improve the satellite's life.

Sivan spoke about the hard work that team ISRO did too achieve this flight after the technical snag was discovered. He said the vehicle was brought back to normal in 24 hours. It took another day and a half to run all the tests before they could announce  a fresh date for the flight.

The focus now shifts back to Bengaluru where the satellite team has the task of getting Chandrayaan 2 into the moon orbit and then, negotiating a soft landing near the South pole over the next month and a half.

For today though, the show was a super hit