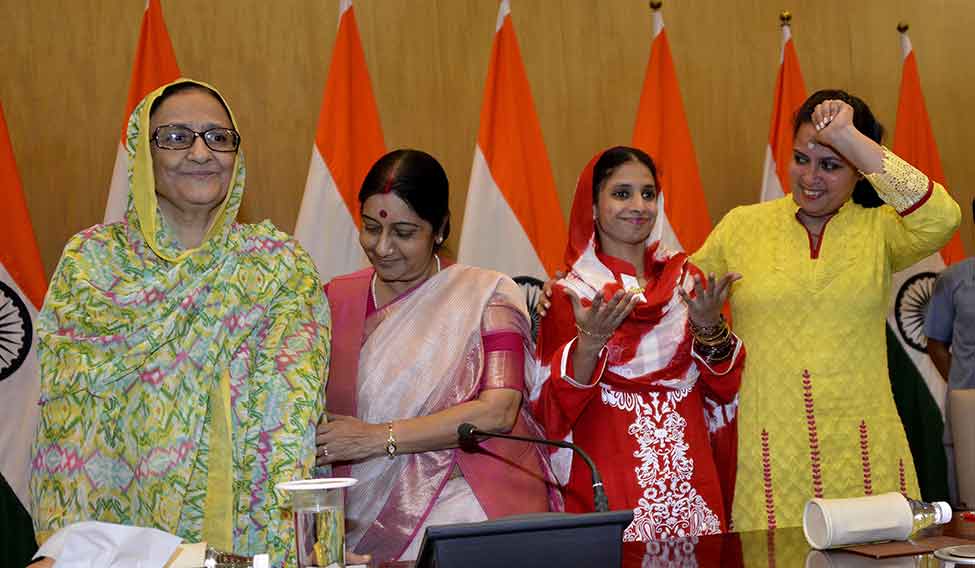 About a decade ago, when she strayed across the border, the deaf-mute girl, today known as Gita, was completely destitute. She had been mysteriously separated from her parents and was utterly lost. Gita still hasn't found her blood family, but she now has no shortage of ammis and maas.

The svelte woman, brought to Delhi from Karachi via a special flight on October 26, was accompanied by her ammi of the last seven years, Bilquis Bano Edhi, in whose house she had been living. Dressed in a red-and-white leheriya salwar kameez, her head demurely covered like her foster mother's, Gita beamed as External Affairs Minister Sushma Swaraj embraced her in a warm hug, promising Bilquis that she would now be Gita's ammi. Standing beside them was another mother-figure, Monika Panjabi Verma, appointed by the Indian government to foster Gita till her biological family was found. Verma runs the Mook Badhir Sangathan, a home for the hearing and speech impaired in Indore, Madhya Pradesh. This centre will be Gita's home for the present.

For one set of “parents”, however, the day turned out to be a disappointing one. Janardhan Mahato and his wife had travelled from Bihar to Delhi after Gita had identified their pictures as those of her parents. Face to face, though, she declined recognising them. The government has taken blood samples from Gita and the Mahatos for DNA testing to establish whether they have familial links.

The first two days were a whir of VIP visits for Hindustan ki beti Gita, who met Prime Minister Narendra Modi, President Pranab Mukherjee and Delhi Chief Minister Arvind Kejriwal. This, after all, was a ghar wapsi that had everyone's approval, on both sides of the border. It provided the much-needed salve on frayed Indo-Pak ties. The similarity of Gita's narrative with the recent Salman Khan blockbuster Bajrangi Bhaijaan gave it an added sprinkling of masala.

Gita was about 13 when Pakistani Rangers found her stranded near the border. They took her to an orphanage in Lahore, but she was a difficult child who threw tantrums. Her frustrations at being unable to communicate her plight worked her up into a terrible state. “They then consulted me,” said Bilquis, who, along with her husband, runs a big charity in Karachi, the Edhi Foundation. “She was restless in the Karachi home, too, and was always trying to get away. Finally, I just took her to my own house.”

Bilquis did what one rarely encounters in real life, but is the staple of the Bollywood communal harmony formula. It was already clear that the girl was from the padosi mulk (neighbouring country) and was a Hindu—she folded her hands in supplication and touched feet as a token of respect. So, Bilquis gave her a separate room in her large Muslim household, which became a haven of Hindu faith. Bilquis got her idols of Krishna, Hanuman and Vaishno Mata, sourced from Mumbai, and even a prayer bell. And she christened her Gita, a profound name, encompassing the philosophy of the subcontinent. “She had her vegetarian food, which she would cook herself. She didn't touch gosht (meat), not even eggs, but readily ate vegetarian fare from our kitchen,” recounted the foster mother.

Gita's story came to the limelight in the wake of Bajrangi Bhaijaan, when the media began reporting on similarly stranded children on both sides of the border. It caught Swaraj's interest, and she personally initiated the ghar wapsi process. “I got in touch with the High Commission to first confirm her story. Then I sent appeals on social media and television to parents who had lost their children. We got many responses, from Telangana to Punjab, but shortlisted four,” said Swaraj. These were further cross-checked by various state governments, till they were left with one claimant, the Mahatos.

Their story didn't fit too well with what was known about Gita. According to them, she was one of seven siblings who had been married as a child and had borne a child herself, too. Her neglectful husband apparently abandoned her. “We were not convinced, but of all the pictures we had shown Gita, she recognised the Mahatos, as well as two of the siblings,” the minister said. Gita now indicates that these are not her folks, leading to a twist in the tale. “The DNA report will decide the future course of action. If it doesn't match, she will stay at Indore while we continue to search for her family. If it does, we will try to convince her to go. Though I feel it would do Gita good to anyway spend some time with Monika, learn some life skills and sign language,” said Swaraj. Perhaps there, the homesickness for ammi and her rakhi brother Faizal will hit Gita.

Bilquis and the Pakistani delegation are state guests of India, and will be taken to all the destinations they wish to see before they return. “Today is Eid for me. But partings are always bittersweet. Thousands of girls from our foundation have been married. I fret over their marriages till it actually happens, then I wish they wouldn't go,” said Bilquis, to which the minister magnanimously added: “When Gita gets married, we will definitely invite you.”

The feel good factor of Gita's homecoming might have a positive, snowballing effect. Reports suggest that the first beneficiary would be Ramzan Mohammad, a Pakistani boy who was separated from his mother when his father remarried and took him to Bangladesh. Ramzan ran from the new family and landed in India, where he was found by the charitable group Childline India. His family in Karachi was traced by a volunteer.

Swaraj insisted that Gita's return was a humanitarian move and shouldn't be given siyasati (political) colour. She added that reuniting families required individual proactivity rather than political will. “But there are several prisoners languishing in Pakistani and Indian jails who have lost their mental balance because of long years of incarceration. I hope we can follow up with the exchange of such prisoners,” she said.