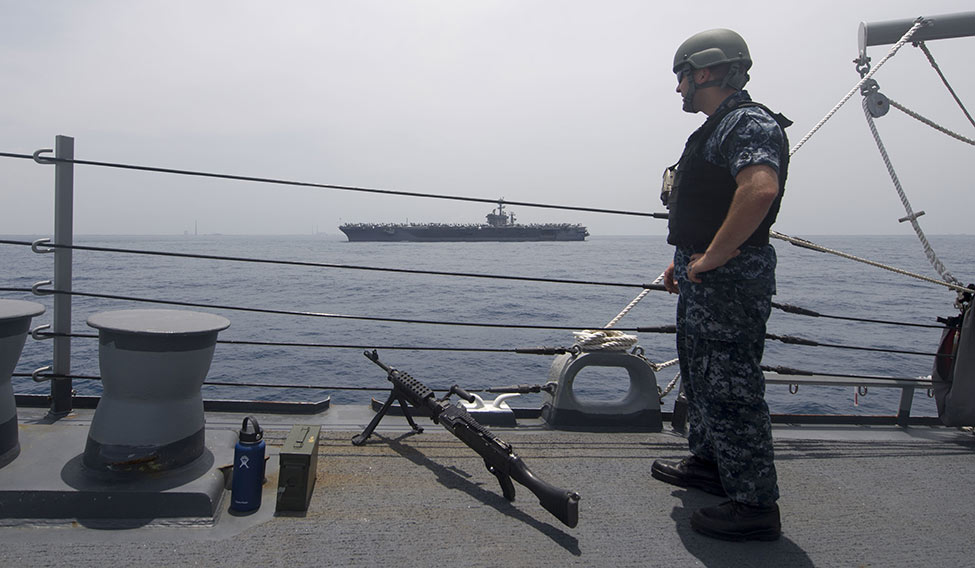 Mission possible: A US navy technician aboard the missile destroyer USS Shoup, which is part of the Malabar 2017 naval exercise of India, Japan and the US, being held in the Bay of Bengal | US Navy

Malabar naval exercise of India, Japan and the US aims at protecting their shared interests, thwarting Chinese designs

The 21st iteration of the naval exercise ‘Malabar’, by the navies of India, Japan and the United States, began in the Bay of Bengal on July 10. While this military engagement originally started as a bilateral initiative between India and the US in 1992, it assumed a trilateral format with the inclusion of Japan as a permanent member in 2015. In 2007, Australia and Singapore also participated in the exercise. From basic passing manoeuvres among naval vessels and replenishment at sea drills, the engagement has grown in scope over the years.

This year’s edition is being conducted both offshore and at sea. It endeavours to hone the high-end war-fighting skills of the personnel of the three navies, besides training them to effectively undertake joint carrier strike group operations, surface and anti-submarine warfare, explosive ordnance disposal, helicopter operations, air defence and visit board search and seizure (VBSS) operations. VBSS entails actions and tactics, designed to capture hostile vessels, to combat terrorism, piracy and smuggling. The exercise would also include medical operations, maritime patrol and reconnaissance operations, damage control exercises, and subject matter expert and professional exchanges.

The overarching aim of the trilateral exercise is to develop a joint capability for protecting the shared interests in the Indo-Pacific region. Creating an effective joint capability requires the highest levels of interoperability, which manifests only through collective understanding of each other’s cultures, military customs and traditions, doctrines, concepts, resources, technologies, standing operating procedures and communication networks. Such annual engagements also help synergise and hone intelligence sharing mechanisms, besides integrating logistic support efforts. The Logistics Exchange Memorandum of Agreement with the US that will be laying down the guidelines for the two militaries to share each other’s assets and facilities is in the last stages of finalisation.

China has expressed concerns on this growing strategic military partnership on numerous occasions. In fact, it had serious objections to the exercise that was conducted in 2007 off the Okinawa base in Japan. It sees such arrangements in the Indo-Pacific region as an attempt to countervail its regional interests. However, India has clarified before every exercise that the joint initiative is only in conformity with its ‘Act East Policy’, and its purpose is to support maritime security in the Indo-Pacific region that will benefit the global maritime community at large. The Pentagon through a press communiqué has also clarified that the exercise is not meant to contain China.

The Indian Ocean Region (IOR) figures prominently in the Chinese pursuit of attaining global power status. To realise this dream, China has focused on enhancing its comprehensive national power, besides creating a power projection capability. Comprehensive national power inter alia hinges on a robust economy. Since its economy is heavily dependent on foreign sources of energy, especially oil and gas from the Gulf countries and Africa, the Sea Lines of Communications (SLOCs) in the IOR assume great significance—82 per cent of its energy requirements and 30 per cent of its trade passes through the Indian Ocean. Mindful of its vulnerability, especially in the Malacca Strait, China has been exploring options that would minimise its dependence on the SLOCs. It has been investing heavily in opening land routes from the Gwadar port in Pakistan to Kashgar in Xinjiang and from the Sittwe port in Myanmar to Kunming in its Yunnan province.

Through clever economic and soft-power investments, China has increased its influence in the IOR and has created both military and commercial facilities at various strategic locations. These initiatives have created the ‘string of pearls’, which is seen by the Indian strategic community and policymakers as an attempt to encircle India. Of concern has also been the blatant display of assertiveness by China, especially in relation to various territorial disputes in the Indo-Pacific region. However, China’s efforts to expand its maritime presence in the East and South China seas have witnessed strong reactions from Japan, Vietnam and the Philippines. Even in Bhutan (Doklam Plateau), where it was trying to unilaterally alter the status quo, it has been resisted by the Indian Army, which had to step in because of the special bilateral relations that has existed between India and Bhutan since 1949.

Being a vital component to global commerce, the IOR has begun to receive greater attention in the recent years from Indian policymakers. India’s strategic approach towards the region is governed by shared global interests and the fact that geographically, it occupies a central location in this oceanic division. Almost 80 per cent of India’s crude oil and 45 per cent of the liquefied gas requirements are met through the Indian Ocean. Moreover, the ocean is important for its mineral wealth and the potential it holds to sustain our fishing and aquaculture industries. The Indian focus has been towards safeguarding the freedom of navigation for commercial shipping and creating joint capability to counter piracy, terrorism, smuggling, proliferation of illegal weapons and human trafficking. Let us not forget that the Mumbai attacks of 2008 were launched from the sea.

It is heartening to note that the India of 2017 has begun to provide the much needed leadership for the furtherance of shared regional interests. Today it is seen as a far more confident and proactive nation that is committed towards not just safeguarding its strategic interests, but also shouldering regional responsibilities. While being a responsible mainstream player, it has begun to shun the past hypersensitivity towards the Chinese concerns. The participation by Indian ships in Malabar 2017 has more than doubled this year, as compared with last year. Given the hawkish stance of China in resolving its territorial disputes and the noble intent of India, more and more likeminded nations will join this initiative in the years to come.

The author is former chief of Army staff.