Time to revisit our J&K strategy 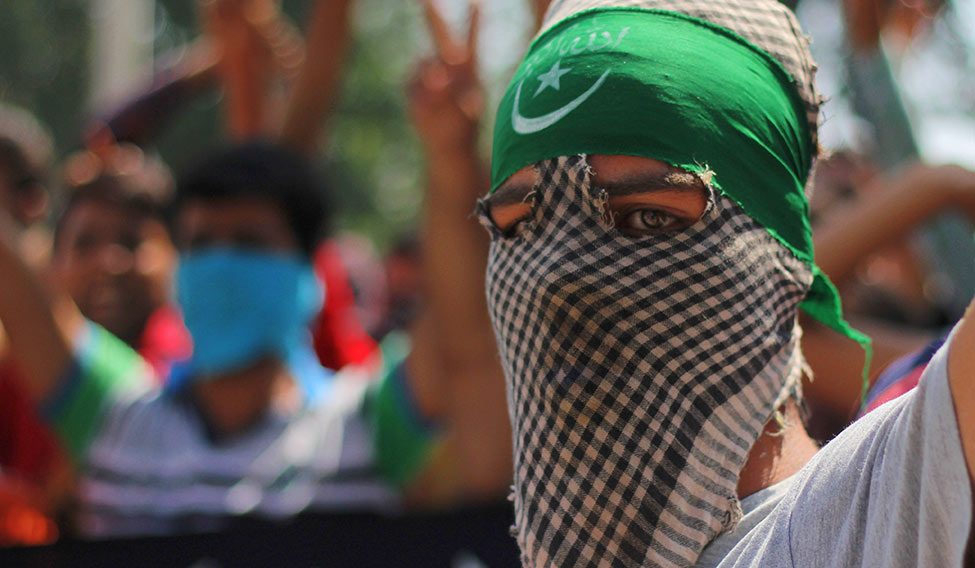 Face off: A protester in Srinagar | Umer Asif

Population plays the most decisive role in the success of counterinsurgency and counter proxy war operations. While our national efforts aimed at restoring peace and stability in Jammu and Kashmir have remained aligned to this capstone principle, the last few months have witnessed deterioration in the internal security environment. The propagation of ‘violent mob mentality’ among the youth suggests that Pakistan-sponsored psychological operations have indeed made a dent. They have been able to exploit the frustrations of the unemployed youth in the valley to spread disaffection.

The other critical features of the security environment today include a discernible increase in radicalisation, ability of the Pakistani proxies to build, in a jiffy, throngs of agitated youth to disrupt operations of the security forces, intimidation of police personnel by targeting their families and augmentation of the fear of their gun through selective killings. Social media, subverted segments of the electronic media and the religious preachers have been imaginatively leveraged by the Pakistani proxies to further their evil designs. Some immature and parochial political statements, from time to time, have also contributed to the current mess. We need to revisit our J&K strategy to ensure peace and stability returns to the valley at the earliest.

The principal component of the revised strategy has to focus on addressing the feelings of disaffection through a ‘carrot and stick policy’. The potential of the unemployed youth must be diverted towards constructive ends. In the absence of occupation, the youth remain susceptible to exploitation for petty sums of money. We should not forget that J&K has the highest rate of unemployment in northern India. It may be the right time now to revive the shelved proposal of raising paramilitary battalions, besides instituting some meaningful measures to boost state tourism.

Also, a clear message must go to all detractors that the state is, and shall continue to remain, an integral part of India, and those indulging in unlawful activities will be sternly dealt with as per law. While the Army has special powers to deal with terrorists under the Armed Forces Special Powers Act, it may be prudent to requisition the Army under the Code of Criminal Procedure to deal with mobs indulging in disruptive and destructive activity. However, for this, executive magistrates will have to accompany military columns during operations. There is a past precedent of such methodology.

To allow the moderate youth to stay away from the mobs, it is imperative that the desired security conditions are created in townships and built-up areas. Bunkers and posts that have been dismantled under political pressure should be restored after an appraisal at the Unified Headquarters (UHQ). The transfers of important police officials involved in operations should be implemented only on approval by the UHQ, which is chaired by the chief minister. There have been reports alluding to the sidelining of some outstanding officers and of pliable police officials being brought into the Valley.

Perhaps it is time to make state political leaders also accountable for actions and their unwitting or deliberate utterances that tend to militate against the national effort. This can be ensured by promulgating a suitable code of conduct through an Act of Parliament. We cannot allow any political leader to openly or surreptitiously further the cause of terrorists and Pakistani proxies. There is a need to revitalise our surveillance and real-time human and technical intelligence generation apparatus. Monitoring of cyber space with focus on social media must constitute an important part of this initiative.

Our public information and perception management campaign should be spruced up to address radicalisation and expose all Pakistani agents who stand to benefit from the proxy war. Media briefings should be undertaken on a regular basis to avoid speculation and to put across various operations and government initiatives in the right perspective. Correct reporting by the media also helps maintain morale of troops, who have to operate under extremely challenging conditions. This campaign must also highlight important facets of our current Pakistan policy, especially the quid pro quo component that aims at exploiting Pakistan’s internal fault-lines if it does not put an end to the export of terror to India. Pakistan will learn to behave only if we can make it bleed by its own disaffected people. To win this dirty war, we have no option but to shun our idealistic stance and be more realistic in our approach towards Pakistan.

Your form could not be submitted.
This browser settings will not support to add bookmarks programmatically. Please press Ctrl+D or change settings to bookmark this page.
Topics : #Human. Right? | #Jammu and Kashmir