Doklam will be resolved only through dialogue 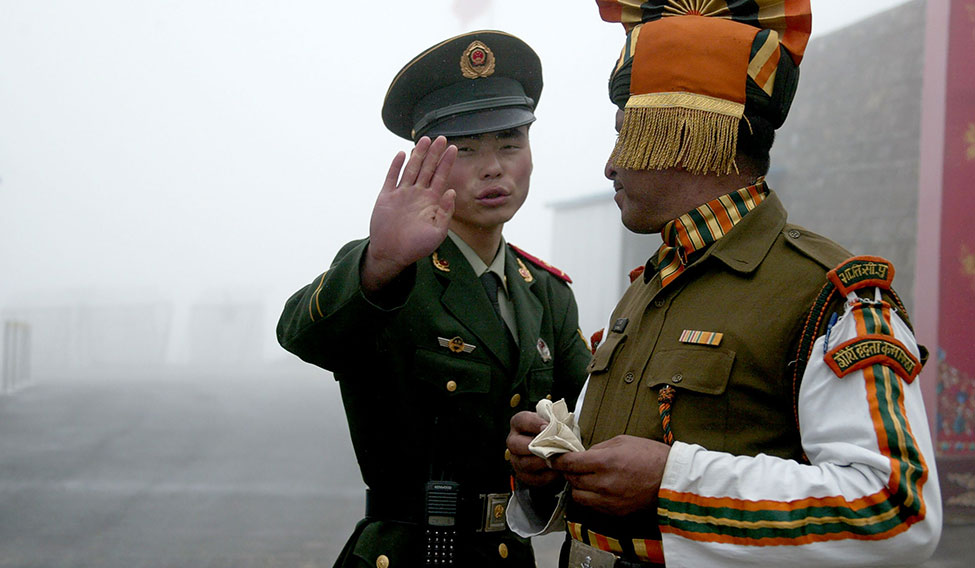 Talk time: An Indian soldier and a Chinese counterpart at the Sikkim border | AFP

The face-off at Doklam has witnessed unusual belligerence from Beijing and its media. Their psychological and perception management campaigns have left no stone unturned to influence Indian minds into submission. They have even gone to the ridiculous extent of reminding the Indian Army of the 1962 war and urging it to learn lessons from it. However, the Indian government’s response has been bold, balanced and unambiguous. Defence Minister Arun Jaitley’s remarks on June 30, about a ‘realist’ India of 2017, were apt in conveying to the Chinese what to expect from the Indian establishment. Indirectly, he also endorsed the Indian Army’s actions and its future intent of staying entrenched in Doklam.

Such statements at the political level are not made off the cuff. They are based on an intimate understanding of the situation and are invariably made in the realm of national policy and strategy. As per the standard operating procedures, the director general of military operations keeps the defence minister and key ministry officials fully abreast of various sensitive issues on a regular basis. These updates, besides covering details of the incident, also cover operational preparedness, along with contingency and risk management plans. The defence minister’s retort, in essence, was an excellent counter to China’s high decibel rhetoric and warmongering. Surely, it also helped awaken the Dragon from its ‘1962 euphoric slumber’ and see the comprehensive national power of contemporary India. A nation that today is far more resolute in proactively safeguarding not only its own interests, but also shared regional interests by forging partnerships with likeminded nations in immediate and extended neighbourhoods.

India-China relations have been on a downward trend in the past few years, resulting in very high levels of distrust. China sees India as a regional competitor that is building an alliance with the United States, Japan, South Korea and Vietnam to countervail its regional interests. India, on the other hand, is peeved with the Chinese policy on Pakistan-sponsored terrorism and its unfavourable stance towards India’s regional and global aspirations. In a climate of distrust, speculation about the Doklam standoff being a potential flashpoint was bound to gain ground. The growing nationalistic zeal and the unyielding stance of the populace on both sides on matters of national security, under two exceptionally strong political leaders, have also contributed to the speculation of a likely war.

Nations contemplate the use of force only as a last resort, when they sense serious threat to their core interests and are convinced that political, diplomatic, economic and informational efforts will be inadequate to safeguard them. For China, which is aspiring to become an uncontested regional power in the next decade and a global power by the middle of this century, a war with India would be an avoidable distraction. It will seriously impede the timely realisation of its long-term strategic goals. China is also mindful of the fact that it has already created a lot of animosity in the South China Sea, where its hegemony is being questioned not just by the US, but also by regional players like Japan, Vietnam, the Philippines and South Korea. The Doklam face-off, given the ‘de jure position’, puts the onus on China of having violated earlier understandings with both India and Bhutan, besides resorting to alter the status quo at the tri-junction. China has also been put in a quandary by US President Donald Trump’s response to North Korea’s threat to its Guam military base.

A war would also be detrimental to the long-term interests of India. However, if push comes to shove, the Indian military would have no option but to take up the gauntlet. Going by the Army chief’s assertion on combat worthiness, the Indian Army certainly possesses the requisite combat power to deal with various operational contingencies in the entire spectrum of conflict. Combat ratios as calculated by some sections of the media are grossly misleading. There are a number of intangibles like strategy, operational art, tactics, leadership, morale, will to fight, training, toughening through battle experience, terrain and weather that need to be factored into such calculations. Today, the Indian Army is among the most proficient and battle-hardened outfits. Proxy war waged by Pakistan in Jammu and Kashmir has helped virtually all ranks to gain expertise in operating under fire and extremely challenging conditions. The Indian Army’s strength in the mountains would lie, inter alia, in its ability to employ, in tandem, expertise in both conventional and asymmetric war fighting. A holistic appraisal of the combat ratios after factoring in the intangibles will show that the Indian Army is definitely well placed to safeguard national interests along the northern borders.

Ultimately, the long-term strategic interests of both India and China are going to guide their behaviour in resolving the Doklam crisis. There should be no doubt in anyone’s mind that the crisis will finally be resolved only through dialogue. Warmongering segments of the media can help in early resolution by exercising prudence and restraint. The two emerging regional powers would be utterly stupid if they get tied down to achieving a tactical victory at the expense of a strategic loss.

The writer is a former chief of Army staff.

Your form could not be submitted.
This browser settings will not support to add bookmarks programmatically. Please press Ctrl+D or change settings to bookmark this page.
Topics : #Bhutan | #China | #Bhutan and China