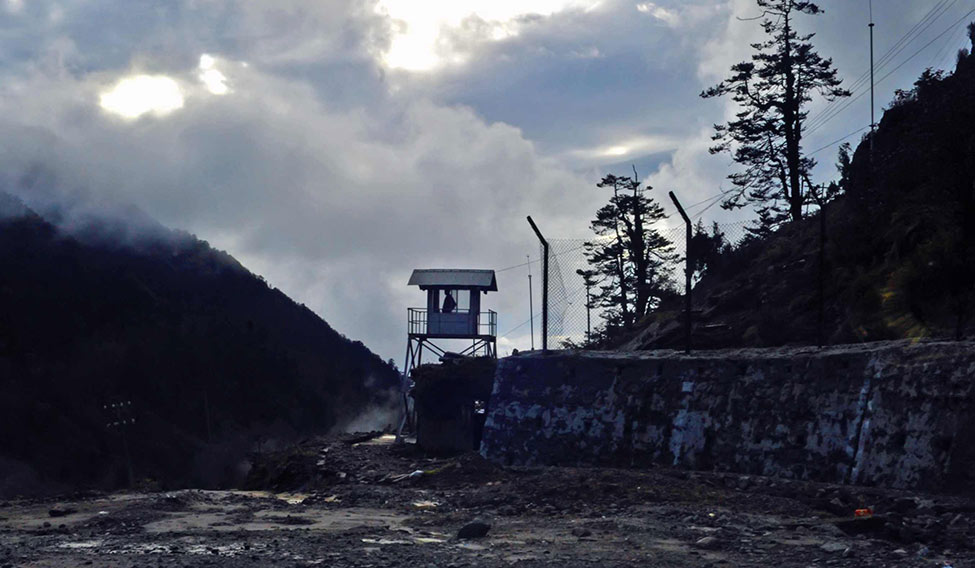 The recent face-off between the Indian Army and the Chinese People’s Liberation Army (PLA) at Doklam is owing to the differing perceptions of the India, Bhutan and China tri-junction. As per the Indian and Bhutanese claims, the tri-junction is near Batang La. However, the Chinese claims show it further south at Mount Gipmochi. This perception has led the Chinese to stake claim to 89 square kilometres area of the Doklam plateau. Though the current face-off is in the Bhutanese territory, Indian Army has got involved due to the special bilateral relations that exist between the two countries since 1949. Moreover, a specific request for help was made by the Royal Bhutan Army after its soldiers were roughed up by the PLA, when they objected to the road construction activity on their soil.

The incident, on expected lines, has drawn belligerent reactions from the Chinese government, which besides threatening to up the ante, has stalled the visit of Indian pilgrims to Kailash-Manasarovar via Nathu La and put on hold the Indian journalists’ visit to the Tibet Autonomous Region. Despite the unsavoury and belligerent Chinese rhetoric, the government of India’s handling of the situation has been far more balanced and mature. Without showing any signs of edginess, the government has clarified its position in no uncertain terms, besides brushing aside the threats on upping the ante. The government has also been emphatic in endorsing the Bhutanese position and clarifying that the road construction would represent a significant change in status quo, which would have serious security implications for India. As per the 2012 understanding between India and China, all tri-junction-related disputes are to be resolved in consultation with the concerned third country.

The Doklam plateau assumes strategic significance for India as further to the south, in the state of West Bengal, lies the geographically sensitive Siliguri corridor that connects our northeastern states to the rest of India. The narrowest stretch of this corridor is just about 20 kilometres with Nepal to the west and Bangladesh to the south. Chinese presence on the plateau will facilitate their operations towards the corridor in the event of hostilities. Being an Indian sensitivity, the corridor has, over the years, witnessed nefarious activities by Pakistan’s Inter-Services Intelligence and other inimical elements. Intelligence reports have also alluded to the presence of Chinese agents in the garb of Buddhist missionaries in and around the corridor.

In the last few years, India’s relations with China have witnessed diplomatic friction and deterioration. Issues that have adversely impacted the bilateral relations are China’s unfavourable stance towards India’s NSG aspirations, its duplicitous policy on terrorism and turning a blind eye to hardcore Pakistani terrorists, deepening and widening defence cooperation between the US and India, India’s transformed Asia-Pacific policy and sovereignty concerns related to the China-Pakistan Economic Corridor, to name a few.

The Chinese are known to respect strength. Speeding up capability and infrastructure development along our northern borders should, therefore, be a strategic imperative for the government. The ongoing bilateral engagement with the US should not lull us into complacency. India will have to fight its own battles and wars. It may be unwise to base our war-fighting strategies on some kind of a tie-up with the US or any other country. Post ‘Operation Iraqi Freedom’, the US has been chary of deploying its troops outside continental US. In fact, since 2013, it has been focusing on empowering the United Nations department for peacekeeping to shoulder additional global security responsibilities and deal with some of these challenges through the use of hard power.

The present face-off, given the hardened stance by both sides, has the potential to escalate tensions between both the emerging regional powers. While the Indian Navy has picked up enhanced Chinese maritime activity in the Indian Ocean, it is unlikely that China would go beyond such posturing and brinkmanship. Hostilities with India do not auger well for China, which has its eyes set to become the uncontested regional power by 2025 and a global power by 2050.

While being firm on our stated position, it may be prudent to also look at options to address the current imbroglio as hostilities would certainly be detrimental to the strategic interests of both the countries. Dialogue at an appropriate level must precede all other initiatives. Since the political leadership from both sides has got involved in this tactical incident through allegations and counter allegations, the initiation of a meaningful dialogue will have to be at the level of the special representatives. Concurrently, both sides will have to exercise maximum restraint and refrain from hostile rhetoric and muscle flexing. Factual media reporting devoid of sensationalism and jingoism will help restore the desired climate of peace and tranquillity. The meeting between Prime Minister Narendra Modi and President Xi Jinping during the G20 summit in Germany on July 7 would certainly define the future course of action. That notwithstanding, ‘Chanakya Niti’ demands that while hoping for a favourable outcome, we should be prepared to deal with the worst possible contingency. Let us, as a nation, not be found wanting.

The author is former chief of Army staff.

Your form could not be submitted.
This browser settings will not support to add bookmarks programmatically. Please press Ctrl+D or change settings to bookmark this page.
Topics : #China | #China Angry Dragon