Apprehensions remain on 'Agnipath' scheme; states yet to announce quota in govt jobs

No oppn-ruled states announced any favourable recruitment scheme for 'Agniveers' 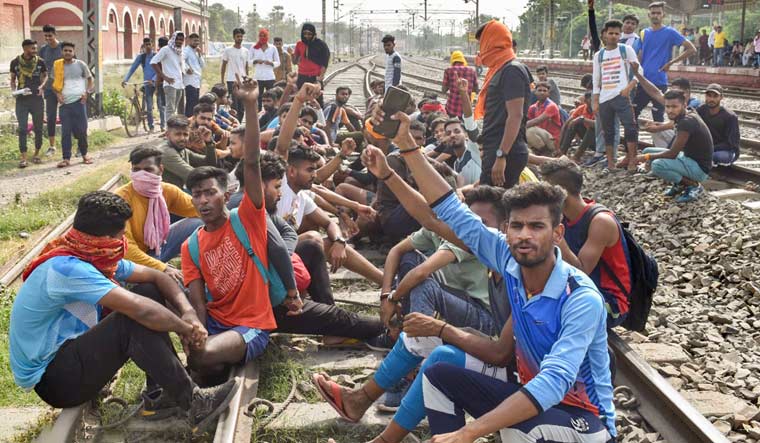 Youngsters sit on railway tracks to protest against the 'Agnipath' scheme, in Buxar of Bihar | PTI

Apprehensions continues to remain over the future of soldiers to be recruited under the 'Agnipath' scheme as the Centre and several state governments are yet to roll out a comprehensive plan for their rehabilitation once they retire after four years of service in the armed forces.

Adding to the anxiety of the youths, none of the states ruled by the opposition parties announced any favourable recruitment scheme for 'Agniveers' to be hired under the scheme, while a few demanded that it be completely withdrawn.

While BJP-ruled Uttar Pradesh, Madhya Pradesh, Haryana, Uttarakhand and Assam announced that they would give preference to 'Agniveers' in the recruitment for police, the ministry of home affairs (MHA) said it has decided to reserve 10 per cent vacancies in the Central Armed Police Forces (CAPFs) and Assam Rifles for 'Agniveers'.

However, experts believe that the process would not be so simple.

A state police recruitment board head said reservation cannot be more than 50 per cent in employment, and most of the 'Agniveers' will be in the unreserved category as the Army has no reservation system.

"So, the idea that they can be absorbed in CAPFs and state police may not work. They have to be considered only against 50 per cent of unreserved vacancies. It will also mean that meritorious and better-educated non-Agniveers will find it difficult to join the police. This will impact the efficiency of the police.

"So, how does the policy of Army recruitment reconcile with the system of reservation in the civilian sector of the government," the state police recruitment board head asked.

Experts also believe that the entire process may come under legal scrutiny as it is not clear whether the pay of a retired 'Agniveer' after the four-year-stint in the armed forces will be protected and seniority maintained.

"This will be a tight rope walk for the government as this needs to be cleared to avoid any disgruntlement among the constables recruited directly by the state police," an expert said.

Haryana Chief Minister Manohar Lal Khattar said youths who will serve the nation under the 'Agnipath' scheme would be given guaranteed 'Group C' (non-gazetted posts) or Haryana Police jobs.

However, the state government is yet to spell out how much percentage of the government jobs will be reserved for the 'Agniveers'.

"The idea is to use the services of the young and skilled 'Agniveers' in different sectors," Chief Minister Pushkar Singh Dhami had said. However, no specific quota has been announced for the 'Agniveers' in Uttarakhand government jobs.

The Uttarakhand government already has a scheme to give jobs to retired defence personnel and their dependents as per their abilities in different departments through the Uttarakhand ex-servicemen welfare association or Uttarakhand Poorva Sainik Kalyan Nigam Limited (UPNL).

About 30,000-35,000 ex-servicemen and their dependents have been given jobs through UPNL in the state, former chief secretary Subhash Kumar said.

Many of them have been made clerks and peons in different government departments through UPNL, he said.

The governments of Uttar Pradesh, Madhya Pradesh and Assam have announced that they will reserve jobs for 'Agniveers' in police recruitment but are yet to spell out the percentage or how they will go about it.

When contacted, UP Additional Chief Secretary (Home) Awanish Awasthi told PTI: "The state government will give priority to 'Agniveers' in the recruitment of UP police as announced by the chief minister".

A senior police officer posted at UP police headquarters on the condition of anonymity said, "We have not received any direction from the government to finalise the modalities of prioritising 'Agniveers' in police recruitment."'

"The chief minister's announcement for giving priority to 'Agniveers' will be followed. We still have enough time to plan as the first batch of retired can only join UP police after four years, at least," he said.

As of now, no reservation is provided to retired defence personnel in UP police recruitment.

A Madhya Pradesh government home department official said the process to frame rules on recruiting 'Agniveer' in the state police force is under consideration and it will be finalised in the days to come as it is too early now.

On the other hand, non-BJP ruled states like Punjab, Rajasthan and Tamil Nadu, which contribute a significant number of youths to the armed forces, sought withdrawal of the scheme, giving a clear indication that they have no plans to reserve government jobs for 'Agniveers'.

Aam Aadmi Party-ruled Punjab's Chief Minister Bhagwant Mann demanded a rollback of the scheme and claimed that it will "dilute" the fighting ability of soldiers.

The Rajasthan council of ministers passed a resolution demanding the withdrawal of the scheme at a meeting chaired by Chief Minister Ashok Gehlot. Congress is in power in Rajasthan.

Interestingly, BJP ally Nitish Kumar, the chief minister of Bihar, which saw maximum violence and damage to railways and other government properties, has not spoken on the 'Agnipath' scheme, though his party JD(U) has said the Centre needs to allay the apprehensions of those opposing it.

Congress-ruled Chhattisgarh's commissioner of state's public relations department Dipanshu Kabra said an additional quota to 'Agniveers' would lead to discontent among local youths, who aspire to get recruited into the police force as there is already a 10 per cent quota for ex-servicemen in Chhattisgarh police constabulary recruitment.

"At present, we have 25 per cent reservation for home guards, 15 per cent for assistant constables and 10 per cent for ex-servicemen in state police constabulary recruitment.

BJP-ruled Gujarat is yet to make any announcement on giving reservation to the 'Agniveers' in state police recruitment.

A senior Gujarat government official said the state government has started deliberations and an official announcement may come soon.

At present, there is a 10 per cent quota for the regular ex-servicemen in the recruitment of policemen, such as constables and sub-inspectors.

"To accommodate ex-army men in the police force as per the prescribed quota, Gujarat police gives them various relaxations, such as lower passing marks than regular candidates, higher age limit and relaxations in the physical exams," said state Director General of Police Ashish Bhatia.

Bhatia said the Gujarat police gives 10 per cent reservation to ex-servicemen in recruitment and now it is up to the state government whether to consider these 'Agniveers' as regular ex-servicemen or not.

The Centre on June 14 had unveiled the ambitious 'Agnipath' scheme for the recruitment of youths aged between 17 and a half and 21 in the Army, the Navy and the Air Force, largely on a four-year short-term contractual basis.

Two days later, on June 16, it raised the upper age limit for recruitment to 23 years for 2022 as the protests against the new model for enrolment of soldiers into the three services intensified.

After the completion of the four-year tenure, 25 per cent of the recruits from each batch will be offered regular service.

Police officers of eastern states such as Bihar, Assam and West Bengal are tight-lipped about recruiting Agniveers' after their retirement, saying it is a policy decision that has to be made by the respective government.

Since 2006, ex-servicemen are being recruited in Bihar as Special Auxiliary Police personnel on a two-year contract and this model was later followed by several states, former director general of Bihar police, Abhayanand, said.

"But the recruitment of Agniveers' (after retirement from the defence services) by the state police will not be contractual. Therefore, legal aspects of this scheme need to be examined," the former DGP told the PTI.

An Assam police officer said, "Reservation (for Agniveers) is possible if the government takes a policy decision. We already have a scope for ex-servicemen. So, if the government issues an order, it can be done."

A top bureaucrat of West Bengal told PTI that the administration has not thought about recruiting Agniveers' into the police force.

"Let the central government announce and write to us, then we will see,” he said.

In the South, the BJP government in Karnataka has not yet decided on holding any discussion on recruiting the Agniveers' in the police department, a top police officer said.

"There is no discussion whatsoever at the government level to recruit the Agniveers' in the police department. It is possible that it may start after four-five years once the Agnipath' scheme takes off, a senior police officer told PTI on condition of anonymity.

The situation is the same in Andhra Pradesh, where the YSR Congress party is in power.

There is no clarity if the Centre has taken up the issue with the Andhra Pradesh government.

A Kerala government spokesman said everything will be decided based on the policy decisions of the state government.