If Shah did the arithmetic, the chemistry clearly belonged to Modi

No matter what time you take a boat out to the Harishchandra and Manikarnika Ghats in Varanasi—at dawn when first light slips through a peephole in the sky or at dusk when the darkness smothers the sunshine—you will meet men at work, hunched over the sacred flame and pyres of wood on the masaan by the Ganges, sending thousands of Hindus on their final, farewell journey. Sometimes families from a so-called upper caste stand at a careful distance as the last rites of their beloved relative are performed by men of the Dom community; the cremation workers are still treated as social pariahs and pushed down to the bottom of the caste totem pole. One would thus imagine them to be bitter about the discriminatory hierarchy the orthodoxy of their faith has consigned them to. One would think that they would gravitate towards parties that represented their caste interests and identity.

Instead, it is here that I met among the most vocal supporters of Narendra Modi and glimpsed the undercurrents of what the prime minister calls a “New India”. Vikram Chaudhary, an outspoken young man in blue jeans and a well-fitting t-shirt with ‘style of new generation’ [sic] emblazoned across his chest, told me he was voting for Modi because he was “India’s only Hindu leader”. Insistent that caste prejudices against his people were not as rigid as before, he said, “In Banaras we don’t discriminate between Hindus and Muslims but why is every other party in the state only talking about wooing the 20 per cent Muslim vote? Modi alone talks for Hindus as well.”

When I asked him for his phone number so I could reach him in case I had more questions, he breezily told me to look him up on Facebook. Looking back after the BJP’s staggering victory, just in that small exchange were manifest many of the BJP’s tropes—aspiration, dreams of economic mobility, social media mobilisation, hypocrisies of the ‘secular’ parties in focusing only on minorities and a subtle, but nevertheless apparent, pan-Hindu consolidation that was able to create a rainbow coalition of varied castes.

The BJP surpassed its own best performance in Uttar Pradesh of 221 seats in 1991 which was achieved on the back of the strident, emotive and volatile Ram Mandir movement. Many threads were woven together to create a saffron tapestry for India’s most populous state—masterful social engineering, adding class as a new ingredient in the caste cauldron by underlining how the demonetisation was the great leveller between the rich and the poor; immensely popular (especially among women) schemes like the cooking gas subsidy and the inability of the opposition to widen its base beyond one or two defined groups.

And unlike in 1991, in 2017, despite the perfunctory mention in the party manifesto, the BJP had no need for a temple to mobilise votes; what hindutva was to the nineties, nationalism was to this moment in India’s political history. The BJP understood that aggressive patriotism has near universal acceptability—and legitimacy—compared with overt issues of religious identity. Nationalism as the new hindutva did not even need over-articulation in election speeches on the campaign trail; surgical strikes, the recent campus wars in JNU or Ramjas and even the currency ban of November 8 had already been located within the larger question of who is an anti-national and who is a nationalist. The narrative was effectively set and controlled by the BJP pushing the opposition parties on the defensive and leaving them unsure and confused about whether to stand up for absolute free speech or play the role of me-too patriots.

But all of these explanations remain ex post facto attempts to explain a momentous win that leaves the BJP and its allies in control of 17 of India’s state assemblies. You can stack up as many factors as you like but the meta narrative of the Uttar Pradesh election is still built on one individual—Modi himself. Credit for tactics and strategy will go to BJP president Amit Shah; but if he did the arithmetic, the chemistry clearly belonged to the prime minister. The man, in other words, is now the message, making him the most dominant political leader in decades, comparable only to Indira Gandhi—not just for his overarching control but also for his positioning as a pro-poor messiah—a personally incorruptible one at that.

This brings us to the opposition and the existential crisis the Congress in particular stares at. With the benefit of hindsight Akhilesh Yadav is to be faulted for giving away 105 seats to the Congress or assenting to the alliance at all. With the Congress delivering only seven seats—its worst performance historically—the Samajwadi Party had greater chances of crossing the 100 mark threshold had it fought on its own. But while Akhilesh and Mayawati’s main worry is their inability to expand their votes beyond single caste groups and Muslim voters, people still had decent things to say about both as individuals. Mayawati was often credited with a firm control over law and order; Akhilesh enjoyed a wide degree of individual goodwill even though his legislators clearly did not. What should worry the Congress is that they—and their leader Rahul Gandhi—were virtually absent from the conversations taking place in one of the most politically alive states of India. And when Rahul was mentioned, even among young voters closer to his own age, it was mostly as a joke or a caricature. The consolation prize in Punjab is seen to be a win delivered by Captain Amarinder Singh, a state taken despite the Congress and not because of it. And whatever be the moral ambiguity of cobbling together a majority in Goa, the fact that the BJP moved quicker and faster shows off its ambitious agility compared with the languid complacency and denialism that plagues the Congress.

The BJP has also stormed the Congress citadel in Manipur making massive inroads in the northeast and demolishing the stereotype of the BJP as a Hindi-Hindu heartland party. Yet, on the day of the verdict, while leaders of other parties came out and publicly conceded defeat or took hostile questions, Rahul left it to party colleagues to do the heavy lifting. He finally spoke only when Parliament convened two days later and seemed to treat the verdict as a minor blip in the up-and-down swing ride of politics. 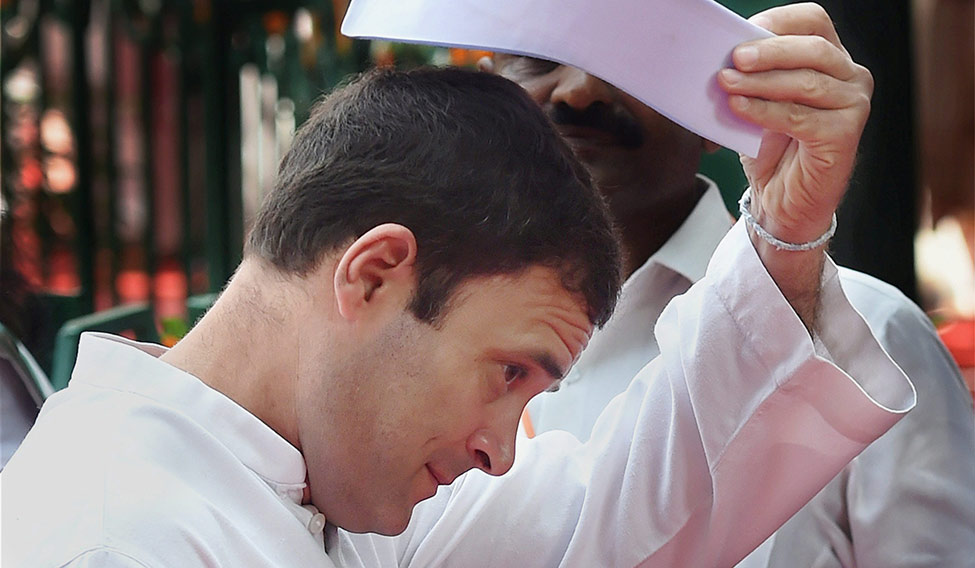 If the cap fits, wear it: Rahul Gandhi | PTI

Rahul couldn’t be further from the truth. The myth of the Gandhi family as the party’s main vote-catchers has been busted in the family bastions of Amethi and Rae Bareli, where the BJP has taken six of the ten assembly segments. There are whispers in the party about a looming “existential crisis” and the apolitical “boys with laptops” who form the coterie around the Congress vice-president. Congressmen confirm that Rahul has hardly said much to them about the wipeout in UP. Several have begun to wonder aloud about other political options.

The humiliation of strong state leaders like Jagan Reddy in Andhra Pradesh, Himanta Biswa in Assam and Ajit Jogi in Chhattisgarh is conceded to be gigantic illustrations of arrogance. Even Amarinder Singh finally got to lead in Punjab because he squarely told Rahul that he would walk out and form his own party otherwise.

This would be the moment for Rahul to step up to the plate, take responsibility for the battering, resign and announce intra-party elections. The only thing that might bring him a moment of redemption is genuine abdication in recognition of the fact that India has changed; the country no longer has patience for the entitled assumptions of political royalty. Power, like jobs, is meant to be earned, not inherited. Regional dynasts, too, will have to reflect on whether Modi as a powerful, self-made individual can pull the rug from under their feet. Their fiefdoms may no longer be safe.

For the Congress to recover its place in history as the party of India’s independence, a centrist force that was broad-minded enough to accommodate ideas of the left and the right under its big-tent nationalism, it must embrace modernity and a changing India. Even Ratan Tata had to learn the hard way that the family name is no longer sufficient to make it. For the top job to be reserved wouldn’t work in a modern private limited company; why should it be any different in politics?

Rahul has to make way for others in his party—P. Chidambaram, Kapil Sibal, Jyotiraditya Scindia, Kamal Nath, Sachin Pilot, Shashi Tharoor, Milind Deora, Sandeep Dikshit—it doesn’t matter who as long as it is someone willing to earn their spurs. The Congress is already on a ventilator; it can choose to remain comatose till it drifts away into certain death. Or it can undergo a clinical trial for experimental treatment. That experiment must begin right at the top.

Your form could not be submitted.
This browser settings will not support to add bookmarks programmatically. Please press Ctrl+D or change settings to bookmark this page.
Topics : #Saffron show | #elections