A big sell-point seems to be his campaign slogan-- 'Together we shall rise again.' 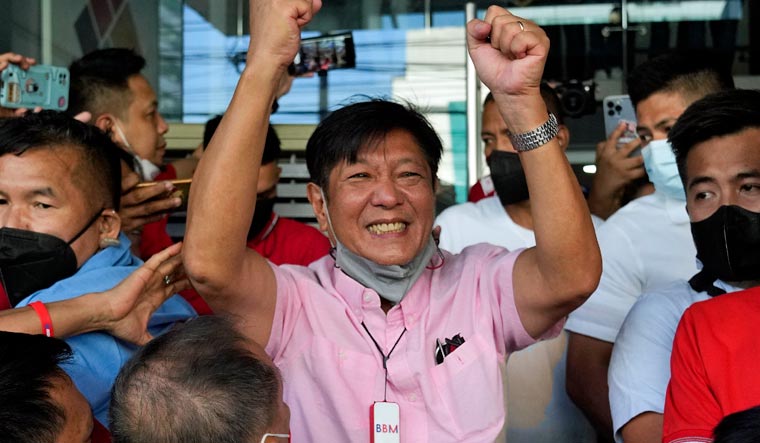 Ferdinand Marcos Jr, son of dictator Ferdinand Marcos, on Wednesday claimed victory in the Philippine presidential elections. He has garnered over 31 million votes in an unofficial vote count for the polls on Monday.

Marcos Jr., however, isn't entirely free from the legacy of oppression and dictatorship. A former provincial governor, congressman and senator, the 64-year-old son who goes by his childhood nickname Bongbong has managed to return his family to the presidency 36 years after the People Power revolt ousted his father and sent him into exile for filching billions and mass human rights abuses.

Marcos Jr. has vowed to work for all people of the Philippines. And said that he wants to be judged by his actions while being a president and not his family's past. Marcos Jr. has defended his father's legacy and steadfastly refuses to apologize for or acknowledge the atrocities and plunder during the dictatorship. Married to a lawyer, with whom he has three sons, he has stayed away from controversies, including a past tax conviction and the Marcos family's refusal to pay a huge estate tax.

His mother, Imelda Marcos, twice unsuccessfully attempted to retake the seat of power after returning with her children to the Philippines from exile in the United States, where her husband died in 1989.

Marcos senior, fled to Hawaii with his family in 1986 after a 'people power' uprising ended his rule that began in 1965. Marcos Jr returned to the Philippines in 1991 and since then has served in congress and the senate.

Throughout his campaign, he tenaciously stuck to a battle cry of national unity. He denies accusations that he financed a year-long social media campaign that harnessed online trolls to smear opponents and whitewash the Marcos family's checkered history, daring critics to show him one.

The family that was accused of greed and brutality is now set to return to the presidential palace.

The Marcos family seems to have benefited by aligning themselves with the Dutertes, another powerful family in the Philippines. Over the years, various members of the Marcos family have held positions of power after returning from exile. Former president Rodrigo Duterte has been well-loved and the Dutertes have had a stronghold in Mindanao in the south, while the Marcoses retain popularity in the provinces of Ilocos Norte and Leyte in the north and centre.

A carefully drawn-up social media campaign, along with cleverly edited videos on Youtube, rebranded the old Marcos era to be a golden age that was prosperous and crime-free. These were posted on pages sympathetic to the Marcos family, a BBC report reads. It appealed to the section of the masses that believed it was unfair to vilify the Marcoses after their downfall.

The pro-Marcos campaign benefited from poor administrations after 1986, which failed to bring significant improvement in the life of Filipinos. Marcos Jr. deliberately stayed away from interviews and presidential debates, to avoid having his family record challenged and projected himself as a candidate for change promising happiness post-pandemic hardship. He was able to maintain an illusion of harmony. The fact that the anti-Marcos vote was divided among nine candidates also helped. Being a family man has also helped Marcos Jr. He has three sons, the eldest of which is Ferdinand Marcos III, also known as Sandro. He is running for the first district congressional seat of Ilocos Norte, the same province where his father was vice-governor at age 23. Sandro has developed a strong social media presence and has a strong following of young female supporters. A big sell-point seems to be his campaign slogan-- 'Together we shall rise again.'