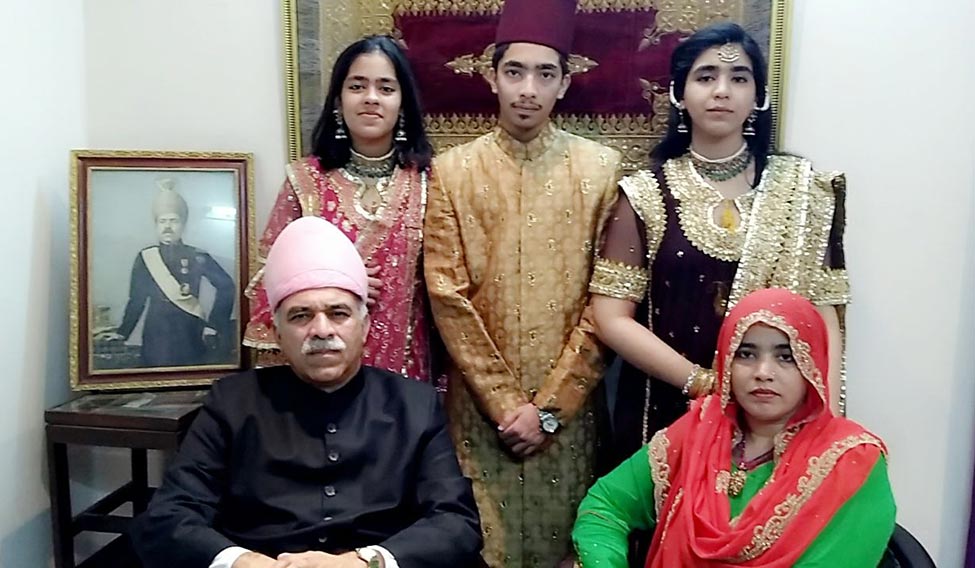 The Nizams were India’s wealthiest royal family. Not any more

No one really knows where all the wealth has gone. Mir Osman Ali Khan, the seventh Nizam of Hyderabad (1911-1967), was considered the richest man in the world with a fortune of $2 billion. The Time magazine put him on the cover of its February 22, 1937 issue. For long his family wanted to know where all the money had gone. Now they are fighting for what is left. “The fight is between two grandsons of the Nizam, Prince Mukarram Jah, the crown heir, and his brother Prince Muffakham and the rest of the family,” said Nawab Najaf Ali Khan, one of the grandsons of Mir Osman Ali Khan. He is also the president of the Nizam Family Welfare Association. The family has nominated him to take care of the legal aspects of the dispute.

“I look after the untouched issues, which are pending in the form of assets and money,” he said. “I have been given absolute mandate from the 120 or so whom I am representing in the UK High Court, claiming the Nizam's money, which has been deposited with North Westminster Bank, now called Royal Bank of Scotland. This wealth is also being claimed by the two grandsons and the governments of Pakistan and India.”

Moin Nawaz Jung, who was Mir Osman Ali Khan's finance minister, transferred one million pounds to North Westminster Bank a day before Operation Polo, the military action that annexed Hyderabad to the Indian Union in September 1948. Currently the amount has grown to 36 million pounds. “It has been in litigation since 1956,” said Nawab Najaf.

In 2013, the Pakistan High Commissioner went to court claiming that the money belonged to his country, but the bank said the matter was in dispute. India has also staked claim for the amount. “We hope for an amicable solution,” said Nawab Najaf. But, considering the adamant stance of the parties concerned, it would be difficult, he conceded. 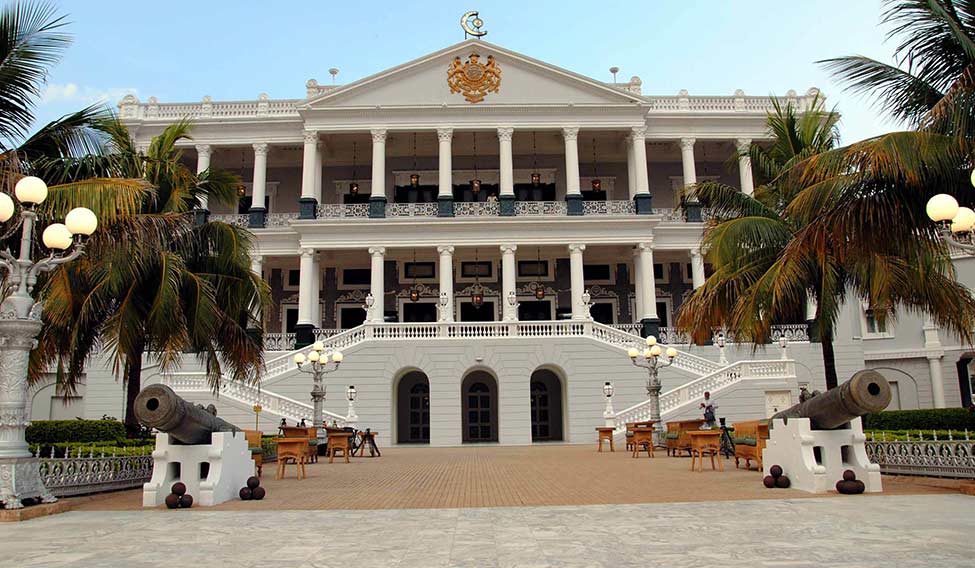 Monumental gain: The Falaknuma Palace in Hyderabad is now a flagship hotel of the Taj Group | R. Sai Sumanth

Mir Osman Ali Khan was known as a miserly person. But he was never stingy when it came to people's welfare. The Nizam Charitable Trust helps the poor with monthly pensions and scholarships. He started many schools and educational institutions. In 1917, he founded Osmania University.

The Nizam had 18 sons and 16 daughters. “Today, only one son and one daughter are alive,” said Nawab Najaf. “There are 120 grandchildren. The richest of them are the two eldest grandsons, Mukkaram and Muffakham, because all the assets were in their control after the demise of my grandfather in 1967.” The current generation is more focused to getting good education. “We have many doctors, engineers, chartered accountants and fashion designers. They are spread all over the world,” said Nawab Najaf.

In 1951, Mir Osman Ali Khan formed a trust called The Nizam Jewellery Trust for his vast collection of jewellery and precious stones. The government purchased it for Rs 206 crore in 1995, after 20 years of litigation. “The family was not allowed to sell the jewellery outside India,” said Nawab Najaf. “It could have fetched Rs 2,500 crore at that time.” 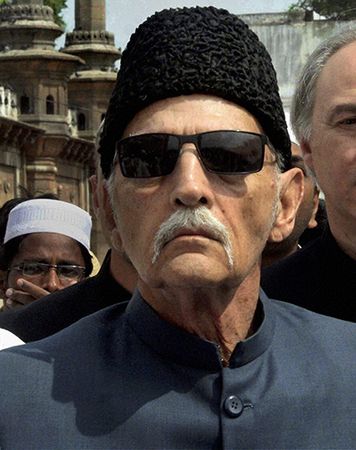 A document called Blue Book has information on all of Nizam's properties. It says the state was 2,14,184 sqkm, and it had five provinces and 17 districts. “The Nizam VII carried most of the wealth from his forefathers. And his rule was considered the golden period of the Asaf Jahi dynasty, during which Hyderabad progressed and prospered remarkably. He was equally popular among his non-Muslim subjects as an unbiased and secular minded king,” said Nawab Najaf.

Though the Nizam resisted joining the Indian Union, he relented once the army intervened to annexe the princely state. In 1965, prime minister Lal Bahadur Shastri set up the National Defence Fund to deal with the threat from some neighbouring countries. The government appealed to the kings for monetary help, but the response was lukewarm. The Nizam, however, was generous—he gave five tonnes of gold.

Prince Mukarram Jah was crowned the eighth Nizam of Hyderabad in 1967 following the death of Mir Osman Ali Khan. When the government abolished princely titles, privileges and privy purses, he decided to settle in Australia and become a “farmer”. He rarely visits Hyderabad, and currently lives in Turkey. After the coronation he famously told an American reporter that the only pleasure he got from going to Hyderabad was tinkering with the broken-down cars in his grandfather’s garage. “I inherited a scrapyard,” he said. “I have a lifetime’s work before me.”

Mukarram left the management of his inheritance in the hands of people he thought he could trust. It was a mistake. Priceless antiques were pillaged or sold off at a fraction of their worth. Jewels landed up at international auction houses. Palace lands were encroached on. “Jah had just inherited what was probably the largest fortune in the world,” wrote John Zubrzycki, author of The Last Nizam: The Rise and Fall of India’s Greatest Princely State. “The vast estate included a treasury that was said to contain more jewels than those of all the other princely states put together, a list of properties including palaces, forts and havelis more than 50 pages long and 14,718 staff and dependents that his grandfather still maintained two decades after Hyderabad had lost its independence.”

Since 2007, however, there has been a turnaround of sorts. Under the stewardship of Princess Esra, Mukarram's first wife, the Chowmahalla Palace has been restored and its collections documented and put on display. The palace has been turned into a museum. The Falaknuma Palace, which was a crumbling heap in the 1990s, is now a flagship hotel of the Taj group. 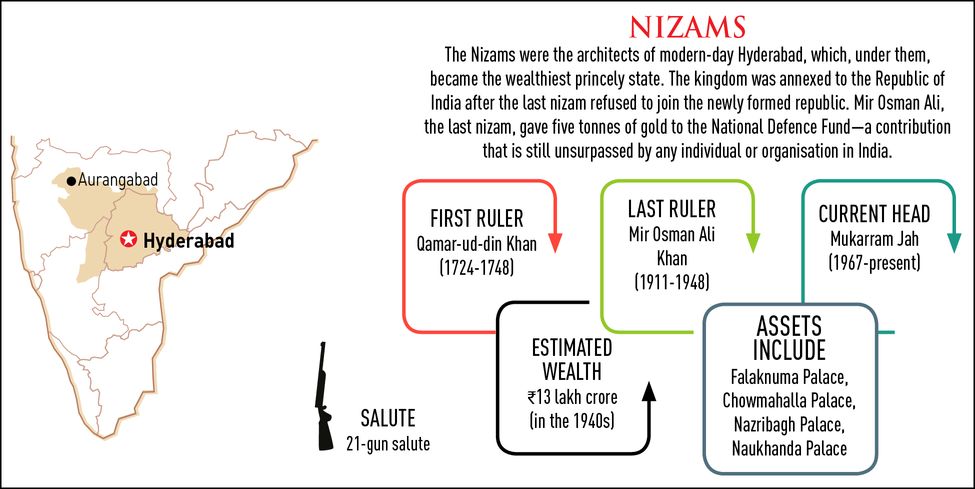