It seems like the other day when I started my career in tennis. Twelve years have passed since I turned professional in a sport that I started playing for fun when I was six, but it has now become my life. During this period, I have had the privilege of playing in 79 finals in Grand Slam, Women’s Tennis Association and International Tennis Federation tournaments of which I won 45 in various categories, including singles, women’s doubles and mixed.

I stopped playing singles after my third surgery and have been focusing entirely on my doubles game and the results have been rewarding though I had chalked up some memorable doubles wins and titles even when playing singles was the priority.

As a professional sportsperson, one is never satisfied with one’s achievements, but I am honoured to have won titles in all the four Grand Slam centres of the world though I won the Wimbledon when I was playing in the juniors.

Recently, I won the BNP Paribas Open for the second time though I have previously played in four finals in this Indian Wells Tournament, which is widely regarded as the ‘Fifth Grand Slam’. These will be proud memories for me. 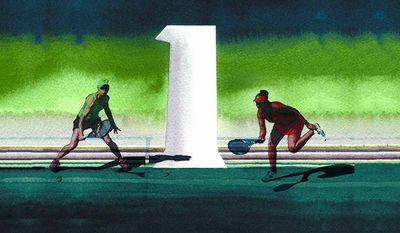 The year-end championship, which is also known as the WTA Finals, is considered the ‘Mother of all Grand Slams’ by the professionals. It was my ambition to qualify for it. Last year, I not only qualified, with Cara Black as my partner, but went on to win with a crushing 6-1, 6-0 victory in the finals against Shuai Peng and Hsieh Su-wei. It was a dream come true for me to win so authoritatively in the showcase event in the presence of legends like Billie-Jean King, Martina Navratilova and Chris Evert while playing what was probably one of the best matches of my career.

While I have just one singles WTA title out of four finals, in doubles, I won 24 of 38 finals. Remarkably, I won with 13 different partners and am happy to have added the name of legendary player Martina Hingis to the list.

Players are as different as chalk and cheese when it comes to technique, temperament, strengths and talent. Though I have learnt a lot from each of my partners with whom I have thoroughly enjoyed being on court but was most successful with Bethanie and Cara. I have won five out of six finals with the former and five out of nine with the latter.

I am now ranked at a career-high of number three in the world in women’s doubles. It is amazing that today there are just two women who are considered better doubles players than me.

I have been fortunate to find success in a game that I adore and if some day I achieve the number one ranking, my cup of joy will be absolutely full.
editor@theweek.in