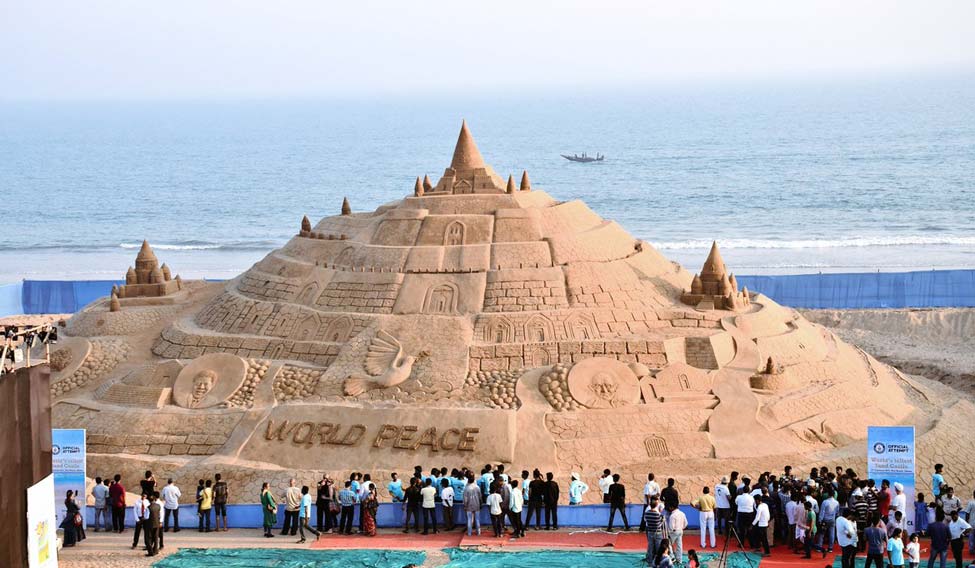 Sand artist Sudarsan Pattnaik now has his name in the Guinness Book of World Records for building the world's tallest sand castle. The award-winning artist built a 48.08ft structure at a beach in Puri, taking over four days. He had 45 students come over from the Sudarsan Sand Art Institute in Puri, and, along with 500 labourers, completed the structure.

As with almost all of Pattnaik's work, this one, too, features a message. It is a tribute to “world peace and harmony”, with the faces of Mahatma Gandhi, the Buddha and Nelson Mandela at the base of the sand castle.

We have created World's tallest Sand castle of 48.8 ft at #Puri Beach,Odisha in india, which is placed in #GuinnessWorldRecord @GWR pic.twitter.com/7N3maWsOww

Pattnaik is known for spreading socially relevant messages through his art.

I am attempting for another #WorldRecord by creating 1000 #SandSanta at Puribeach. More than 800 completed. Tomorrow evening will be opened pic.twitter.com/udyVjfHCvF

In 2016, he created a sculpture with 1,000 Santa Claus heads, with the message, “Bring happiness to the world”.

When demonetisation hit Indians out of the blue and left many stranded for cash from ATMs, Pattnaik's sculpture sent out a message of hope and perseverance. The sand sculpture showed two faces, one which had a wreath on notes of 500 and 1000, with the message “RIP black money”, and the other with the pink and white Rs 2000 note, saying “Beginning of a clean India”.

"Beginning of a Clean India: RIP Black Money" My sandart on #Demonetization at #Puri beach, #Odisha.

Among his other works, the most notable were the ones in which he appealed for tiger protection, eco-friendliness and sculptures congratulating Olympic medallists. Previously, his work has also spoken against female infanticide and religious intolerance, while also touching on topics such as cricket and music.

: #HumanityWashedAshore My Homage to the Syrian boy #AylanKurdi through my sand sculpture at Puri beach, in Odisha, India

With over 47,000 likes and followers on Facebook and Twitter, he is a revered artist who connects with people around India over sand art.

My sand sculpture of Dr. APJ Abdul Kalam to pay tribute to the people’s President with a message “Tribute to A common man, Missile Man, Bharat Ratna, ” At Puri beach of Odisha on Tuesday.

Puri-based Pattnaik was bestowed with the Padma Shri in 2014. Between 2006 and 2010, he created world records at the same beach, which earned him a spot in the Limca Book of World Records for five consecutive years.

A great soul #OmPuri ji,filled with passion for craft & innocence in his heart.My SandArt, "Tributes to Legendary Actor" at Puribeach,Odisha pic.twitter.com/s5Z2gDkmPw

According to reports, he also created 23 world records in Limca. He also serves as the brand ambassador for the International Sand Art Festival in Odisha, which happens in around December every year.

Sleeping beauty on sand . one of my #SandArt in 2008 at Istanbul during the international sand art festival . pic.twitter.com/WwLizM449I

His efforts also won him awards in Turkey, Italy, Japan, Spain, Germany, China, Russia, South Korea, Canada and the US between 2002 and 2016.