Maharashtra, Andhra Pradesh and Karnataka have taken the lead in introducing hyperloop technology

Hyperloop is a mode of transportation which is likely to revolutionise the way the world travels. In this system, a capsule full of people or goods is levitated in a near-vacuum tube, which travels at a velocity close to the speed of sound. A superfast and direct-to-destination mode of transport, hyperloop can be developed at half the cost of high-speed rail systems. Experts say the system is efficient, safe and reliable. Across the world, research is in progress about adopting the new technology, and in India, three states—Maharashtra, Andhra Pradesh and Karnataka—have taken the lead.

Amaravati in Andhra Pradesh, the youngest state capital in India, is among the first cities to embrace hyperloop technology. It has signed a Memorandum of Understanding with the California-based Hyperloop Transportation Technologies to transport passengers between Vijayawada and Amaravati in five minutes, covering 35km. Last month, Bengaluru joined the hyperloop wave by signing an MoU with Virgin Hyperloop One, a firm promoted by British businessman Richard Branson. The Virgin group tested a full-scale hyperloop system early this year at its facility located in Nevada, in the United States.

Virgin is also the partner chosen by Maharashtra. The Maharashtra government recently signed an MoU with the company to explore the feasibility of developing a superfast transport network between Mumbai and Pune. The MoU was signed by Kiran Gitte, commissioner, Pune Metropolitan Regional Development Authority (PMRDA), and Nick Earle, senior vice president, Virgin Hyperloop One.

“Hyperloop is the future of Mass Rapid Transport System developed for demands of the 21st century. It requires high density traffic, which is available between Pune and Mumbai. Hyperloop will help connect metropolitan regions of Pune and Mumbai by reducing travel time to less than 20 minutes. The project will benefit more than two crore people in the Mumbai-Pune region,” said Maharashtra Chief Minister Devendra Fadnavis.

Gitte told THE WEEK that the MoU with Virgin would cover a pre-feasibility study of the traffic density between Mumbai and Pune and identify possible routes. “A report will be submitted to the state government in six weeks. All costs for the study will be borne by Hyperloop,” said Gitte. The PMRDA will coordinate with all departments of the state government as well as municipal corporations to obtain passenger traffic details and other relevant data required for the study. “On the basis of this study, a feasibility report will be prepared. It will discuss aspects like choice of final route, possible cost and engineering aspects. We will need traffic density of 5,000 passengers per hour for hyperloop to be feasible,” he said.

Bibop G. Gresta, chairman of Hyperloop Transportation Technologies, said hyperloop was cost-effective. “It will be possible to recoup the investment in eight to ten years as the cost per kilometre is approximately $25 to $40 million. The system is conceived to be elevated on pylons using new generation materials. This will allow us to build using existing right of ways on top of roads or rails, wherever possible,” said Gresta. He said the project had several advantages compared with high speed rail and that land acquisition would not be a major concern. “It is faster, silent, and it can generate more electricity than it consumes because we have decided to use a combination of renewable energies such as solar panels, wind, kinetic energy, regenerative braking and geothermal. We can share the excess energy with landowners who are granting us the right of way. So, we have a better selling proposition for the acquisition of the right of way,” he said.

Transport expert Sudhir Badami, however, sounded a word of caution about the project, especially in Mumbai. He said hyperloop was a futuristic idea, but its implementation could bring hardship to Mumbaikars. The metro is expected to improve the ease of transport and the delays in completing the metro project can be tackled by the BRT (Bus Rapid Transit) system, which is an inexpensive one, according to Badami. He pointed out that there was no clarity about the financial burden. “Therefore, all ambitious plans for the early completion of this project are false.” 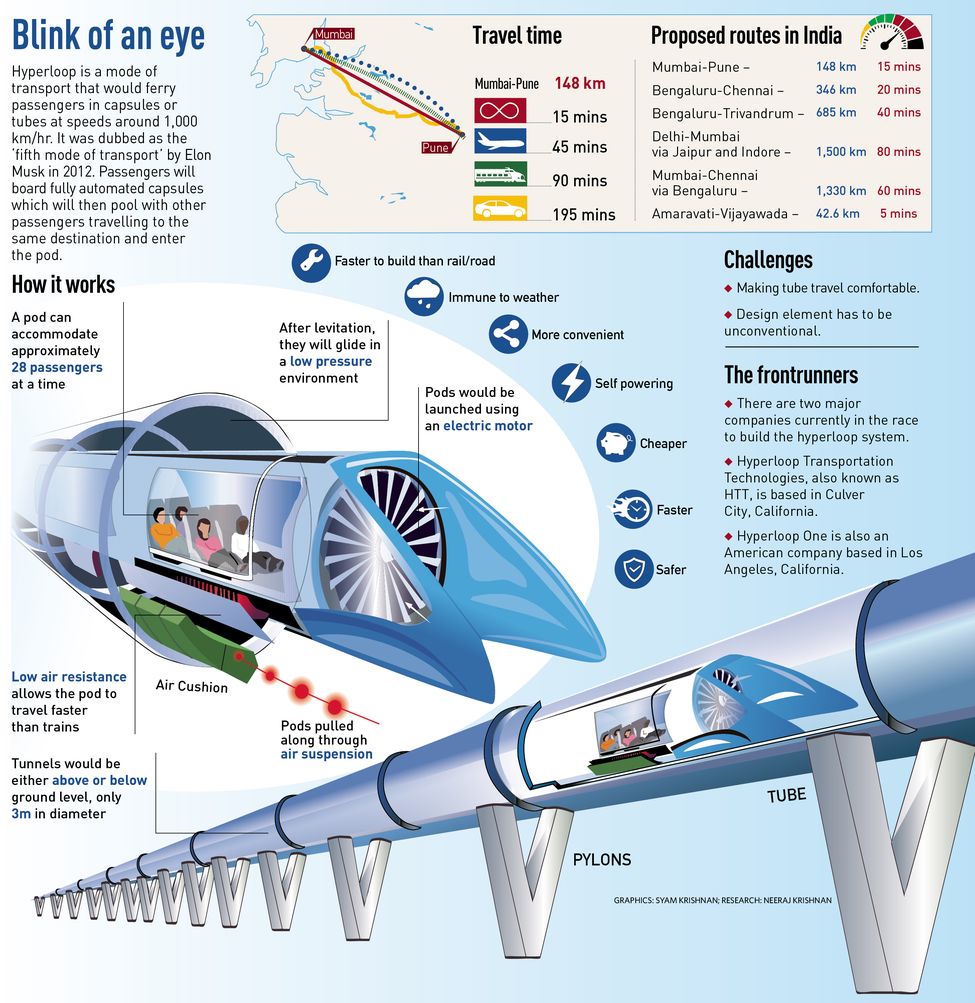