Israel has a number of technologies worth exploring for the benefit of India: Avi Jorisch Guest Column- Author of ‘Thou Shalt Innovate: How Israeli Ingenuity Repairs the World’, available currently on the subcontinent in English and Hindi, and soon in Kannada and Marathi.

In early March of 2020, a few weeks before the coronavirus roiled the world, my three young sons and I piled into the Washington Convention Center in D.C. for a policy conference. I wanted them to see how technology—from advanced water preservation techniques to highly sophisticated plastic recycling methods—can help solve some of the world’s most intractable problems.

As we wandered through the massive crowd, we bumped into Eli Beer, founder of United Hatzalah (“Rescue”), an Israeli non-profit that has revolutionised emergency care. Over the past two decades, Eli’s organisation has brought together volunteer emergency medical technicians (EMTs)—Jews, Christians and Muslims—to save thousands of lives. One of his innovations is an Uber-like app that connects people needing emergency care with volunteer EMTs who are in their area. These EMTs often travel by ambucycle, a refitted motorcycle that acts as a mini-ambulance and is nimble enough to weave through traffic. In Israel and elsewhere, Eli’s innovation has helped to drastically reduce EMT response time.

With my sons Eiden, Oren and Yaniv, I explored Eli’s booth. All three boys strapped on a set of virtual reality goggles and learned what it’s like to work as a United Hatzalah volunteer. As their eyes widened, I felt optimistic about technology’s ability to make the world a better place—and about the next generation’s contribution to our planet. “When I get older, I don’t want to drive a car,” Eiden later told me, as my two other children nodded vigorously. “I want to ride an ambucycle and save lives.” I’ve never been prouder.

The secrets behind Israel’s technological success lie in the story of United Haztalah and the many other innovations coming from this part of the Middle East. How did Israel, a tiny country in a hostile Middle East, become a tech powerhouse? And what lessons can Indians learn from Israel’s success that they can integrate for their own benefit?

There are several explanations for Israel’s success: mandatory military service, renowned universities, smart government programmes supporting innovation, a diverse population, and a dearth of natural resources. Yet no list would be complete without mention of chutzpah, an Israeli national trait that is best described as a combination of self-confidence and audacity.

Indians will identify with the fact that Israel is not just a “start-up nation,” but a place where people of all religions and ethnicities strive to make the world a better place for everyone—even as the surrounding region is mired in seemingly intractable wars.

Israel and India have many similarities. Since India declared independence in August 1947, it has transformed its economy from one of the world’s least developed to one of the largest and fastest growing. Much of the fuel for this astonishing metamorphosis is technology and innovation. Both countries have ancient religious and cultural traditions; both are relatively young, established within a few months of each other; both have a history of British rule; both have diverse populations and outstanding universities; both live under constant military threat; both have become regional superpowers; and both have a strong start-up ecosystem. 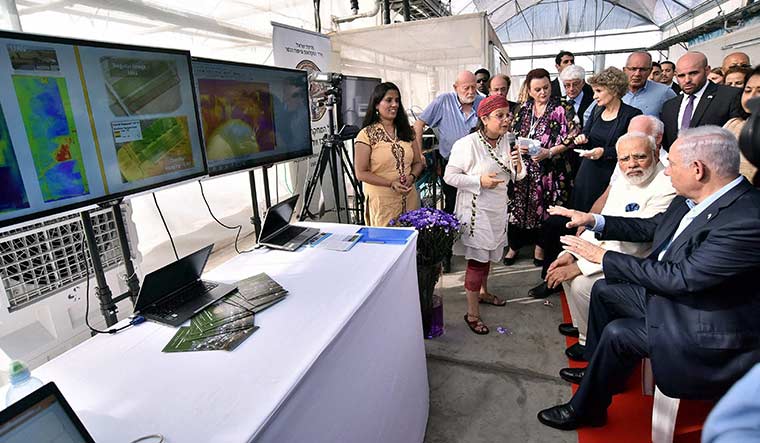 India has an ancient culture and has given the world fibre optics, yoga, cataract surgery, and the cure for leprosy and lithiasis. India also has one the world’s fastest-growing economies, which in recent years has experienced growth, job creation, increased access to resources, improved education, and enhanced health care. In the last decade, India has produced several thousand start-ups. According to NASSCOM, India’s national association of software and services companies, the country’s start-up ecosystem is the third-largest in the world, after the US and the UK, and one of the fastest growing.

Israel has mobilised to solve problems that originally appeared unique to it, but ultimately proved to be applicable elsewhere. As India looks to the global stage for the best innovations to improve the lives of its citizens, Israel has a number of technologies worth exploring for the benefit of all. These are but a few examples:

THE UBER OF AMBULANCES

Today, India has over 50 cities with a larger population than Jerusalem, including Delhi, Mumbai and Bengaluru. Response time to emergencies varies widely in different locations. In 2016, to save as many lives as possible, India’s Telecom Regulatory Authority recommended adopting a single emergency number, 112, for use around the country. This number now connects Indians with the police, ambulance services and fire departments. 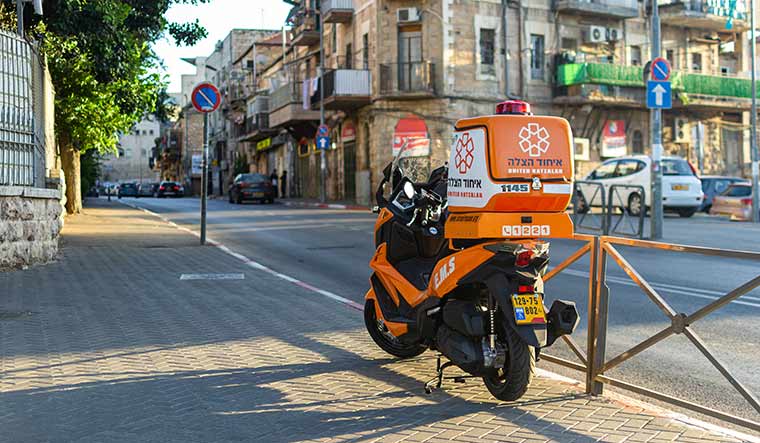 Saving lives: United Hatzalah volunteers treat approximately 2,45,000 Israelis, by travelling on ambucycles; each has a trauma kit, an oxygen canister, a blood sugar monitor and a defibrillator.

In Jerusalem, a city of about nine lakh, an ambulance can take more than 20 minutes to arrive at the scene. That’s far too long in a place with devastating terror attacks. Beer, who nearly died in a terror attack as a child and has been interested in emergency care since then, wanted to speed up the process and make it more efficient. About 20 years ago, he started United Hatzalah with a group of volunteer EMTs, but in order to save more lives, he needed to expand the group. To do that, Beer had to solve two problems. First, he needed to construct a highly trained network of people all over the country. Second, he had to create a system to ensure that medics can treat victims almost immediately.

Today, Beer has more than 6,000 volunteers in Israel, including secular and religious Jews and Muslim and Christian Arabs, and Hatzalah has chapters in the United States, Brazil and Panama. All its EMTs use a smartphone app that sends a notification to the five volunteers closest to the person needing help. These EMTs often travel on ambucycles, and each has a trauma kit, an oxygen canister, a blood sugar monitor and a defibrillator. Hatzalah volunteers treat approximately 2,45,000 Israelis annually, including 27,000 children. A quarter of the calls the organisation fields are for life-threatening situations.

In July 2017, when Prime Minister Narendra Modi visited Israel, he met with Beer, who illustrated how Hatzalah’s model could be used in India’s congested cities and in the outlying countryside. “With the congested streets that are characteristic of many of India’s cities, and large segments of the population who live in areas with difficult terrain,” says Beer, “having local volunteer responders in India could save many lives.” After the meeting, Modi said that he wanted to adopt a similar model for India.

According to the Indian Grain Storage Management and Research Institute, each year, India loses 12 million to 16 million metric tonnes of food as a result of improper storage and infestation. To lower post-harvest waste, farmers use chemical pesticides that impact the health of consumers and of the environment. But an Israeli-developed technology presents an excellent solution. 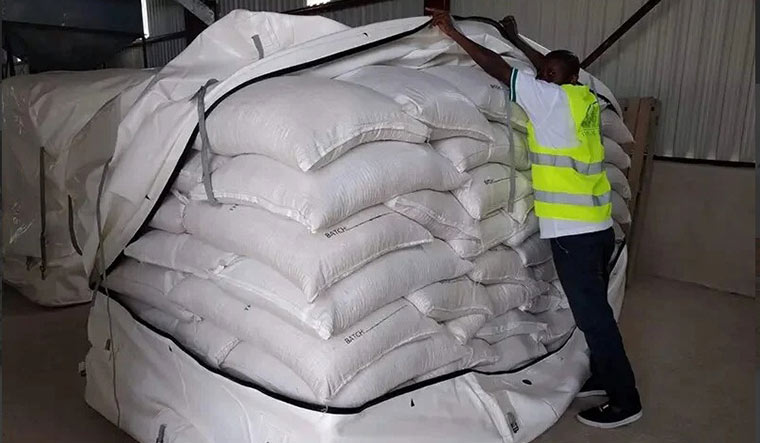 Quite fruitful: Grain Cocoon, a large, hermetically sealed bag for rice, grains, spices and legumes, could save millions from malnutrition.

About 30 years ago, Professor Shlomo Navarro developed the Grain Cocoon, a large, hermetically sealed bag for rice, grains, spices and legumes, which could save millions of people from malnutrition. Farmers in the developing world have traditionally used burlap sacks to store their goods, but these sacks are easily infiltrated by insects that sometimes destroy more than half the harvest. Some farmers use pesticides, which can not only cause sickness and death, but become ineffective over time.

Reducing post-harvest losses, experts say, will play a critical role in the fight against world hunger. Navarro’s cocoon traps bugs and their eggs inside and deprives them of oxygen, suffocating them to death and making pesticides unnecessary. The cocoon can save more than 99 per cent of a farmer’s crops, and since it was introduced by Navarro’s company, GrainPro, in the early 1990s, it has been used in 100 countries and saved their harvests from insects, rodents and other pests.

Despite the Grain Cocoon’s benefits, it has gained little traction in India, and pesticides still reign supreme. A major reason is cost. Each cocoon, which stores upwards of five tonnes of grain, sells for more than $1,000, a hefty price for most poor Indian farmers. The Indian government should consider subsidising the costs of the cocoons.

Over the last half century or so, interest in solar water heating has spread because we are consuming oil, gas and coal at an alarming rate. These fossil fuels emit harmful greenhouse gases that contribute to global warming, and policymakers around the world now realise that they must fight climate change. In India specifically, inexpensive clean energy will play an important role in helping the population rise to the middle class. Energy bridge: In 1976, Israel’s parliament passed a law requiring every building constructed after 1980 to have solar water collectors.

In 2018-2019, India generated 72 per cent of its energy via coal-fired power plants, which are expensive to operate and far from environmentally friendly. But India has roughly 300 days per year of sunshine, and with energy consumption on the rise, using solar energy panels would be smart on almost every level. It is also worth mentioning that two of India’s international airports, Cochin and Kempegowda [Bengaluru], already run fully on solar power (Cochin was the world’s first).

In the early 1950s, Israel was newly independent and struggling. Israeli physicist Harry Zvi Tabor knew that Israel would need a cheap and reliable energy source. Tabor developed special stripping that collected solar energy, and he connected the stripping to a water collection device. This solar heater, which yielded more hot water and produced more electricity than a turbine, is now ubiquitous in Israel and one of the most recognisable features on many rooftops around the world.

In 1976, Israel’s parliament passed a law requiring every building constructed after 1980 to have solar water collectors. Over the years, this has saved Israel and its citizens billions of dollars in energy costs. Today, about 90 per cent of all households in Israel use Tabor’s invention—and many buildings throughout the country are moving to solar power. India should consider drafting similar legislation.

With government assistance and through increased awareness, this innovation could play an important role in powering India’s economy. The solar water collector has the potential to serve as a powerful energy bridge between Israel and India.

India and Israel have tremendous potential to solve the world’s greatest challenges, deepen their commercial interests, and create technology together. To further promote innovation, India and Israel should strengthen their ties. In 2018, the two countries launched the India-Israel Industrial R&D and Technological Innovation Fund, which involved an annual investment of $4 million from each country for five years, for a total of $40 million. The memorandum of understanding they signed is meant to boost cooperation in science and technology, specifically targeting technological innovations in areas of mutual interest such as water, agriculture, energy and digital technologies. Innovation experts are optimistic that the programme will turn out to be one of India’s and Israel’s most important diplomatic achievements in recent years. Nevertheless, these two democracies can do even more to leverage their relationship for the benefit of their societies.

As the world faces many grave challenges, including some threatening the very future of our planet, Israel is playing an outsized role in creative solutions that make an impact. As Indian policymakers, aid workers, scientists and others look to solve these challenges, they should consider turning to Israel—for existing innovations that can make a difference, or to work to create new ones together. Israel’s Uber of ambulances, grain cocoon, and solar water collector provide excellent opportunities to strengthen the relationship between the two countries. Integrating these innovations into Indian society could improve and save the lives of an untold number of people.