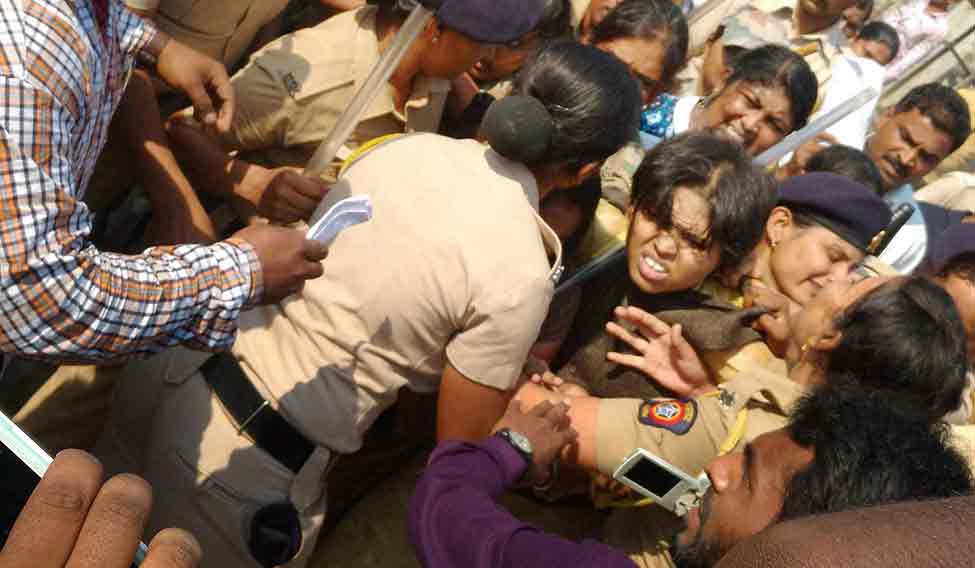 No entry: Trupti Desai and other activists at the Shani Shingnapur temple | PTI

The Maharashtra government is on the back foot after the police failed to ensure women's entry into the inner sanctum of the Shani temple in Shani Shingnapur town, Ahmednagar, on April 2. Chief Minister Devendra Fadnavis, during a party meeting in Nashik the same day, had assured that the government would obey the High Court ruling allowing women to worship at the temple, and protect women who wanted to pray there.

However, when a group of women activists, led by Trupti Desai of Bhumata Ranragini Brigade, tried to enter the inner sanctum, residents, led by local women, stopped them and a scuffle ensued. The police merely watched it initially and then detained the activists.

The demand for allowing women to pray at the Shani temple is not new. In 2000, Maharashtra Andhashraddha Nirmoolan Samiti, led by late Dr Narendra Dabholkar, had led an agitation for it. Noted women's rights activist Vidya Bal, too, was part of the agitation. The recent ruling by the High Court was in response to her petition. “After what happened on Saturday [April 2], I feel an FIR ought to be filed against the chief minister for failing to obey the High Court's ruling,” she said. “He is the home minister and he has clearly fallen short.... What he should have done is open a dialogue with locals, the temple trust, and protesters and taken a clear stand that the ruling by the High Court has to be obeyed.” She pointed out that the law clearly states that those who allow discrimination are liable to face a prison term of six months.

Nationalist Congress Party legislator Vidya Chavan said Fadnavis had buckled under pressure from the RSS and groups like Sanatan Sanstha and Hindu Jagaran Samiti. “It is yet another pointer to how law and order has collapsed under this government,” she said. “They failed to realise that women who are religious and believe in traditions will never go to the inner sanctum of Shani temple, while those who have rebel spirit will go there for a few days.”

Social activist Suniti S.R., however, said the locals were pitting women against women. “The court ruling has to be welcomed. It is a much-needed step towards equality,” she said. “Our state has a right to intervene in religion as per our Constitution. But I feel every step towards equality should come from a consensus within society. When that did not happen, the court had to intervene and order the state to fulfil its responsibility.”

She may have a point. On April 2, Rural Development Minister Pankaja Munde performed puja at another Shani temple in the same district. But, last December, when the Shingnapur issue had just resurfaced, Pankaja had taken a stand that traditions and age-old practices could not be linked with insult of women.

Trupti Desai's group has now decided to take up the issue of women's entry in the inner sanctum of Trimbakeshwar temple in Nashik. The idol at Trimbakeshwar, a Shiva temple, is one of the 12 jyotirlingas in the country. Bhimashankar temple, which has another of the jyotirlingas, however, allows entry of women in its inner sanctum. Bal said two trustees of Trimbakeshwar temple had told her that they would obey the High Court order. But local reports indicated that the trust had decided to bar even men from the inner sanctum.