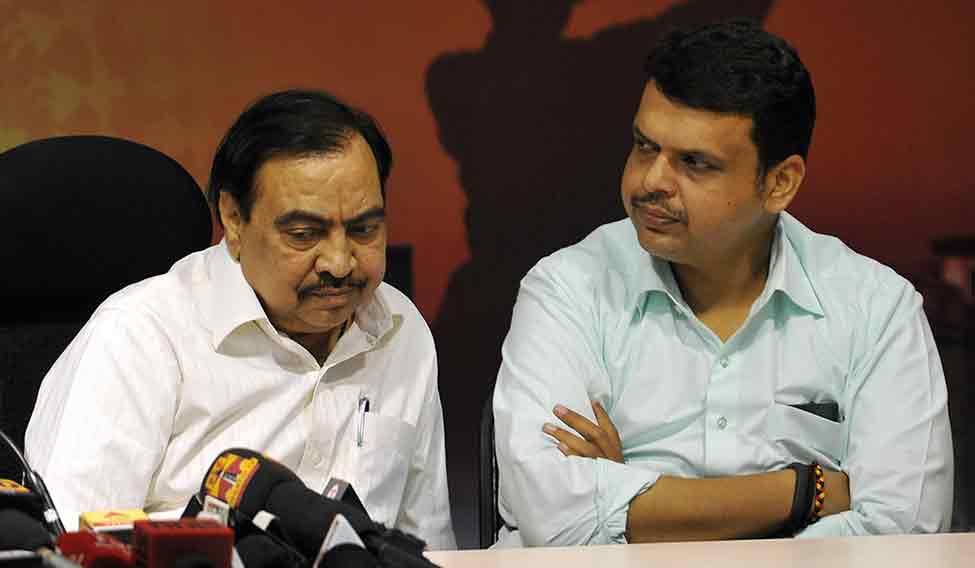 Asset-turned-liability: Fadnavis (right) was not willing to sack Khadse, given his stature and seniority in the BJP | Amey Mansabdar

Eknath Khadse’s resignation saved the BJP the embarrassment of sacking a minister, but the party’s image has taken a hit

On June 2, Maharashtra Chief Minister Devendra Fadnavis met Prime Minister Narendra Modi and BJP president Amit Shah in Delhi and briefed them on the allegations against former revenue minister Eknath Khadse. The same day, quite unusually, party spokespersons in Maharashtra decided not to participate in any television debate on the charges against Khadse.

Hours later, a senior journalist said on his television show that BJP spokespersons who had earlier participated in three debates on the Khadse issue conveyed that they were unavailable. He termed it as a cowardly act. To a source in the BJP, however, it was a strategic move. “The media, in any case, loves BJP bashing,” said the source. “So what was the point in defending the indefensible?”

By all accounts, Khadse’s position had become indefensible. First, his personal aide Gajanan Patil was arrested by the anti-corruption bureau for demanding a bribe of 030 crore from economist and activist Ramesh Jadhav for allotment of government land. Then came Manish Bhangale, a Vadodara-based hacker, who said Khadse’s cellphone had received calls from gangster Dawood Ibrahim’s residence in Karachi.

Khadse took another hit when it was alleged that he had facilitated the sale of a Maharashtra Industrial Development Corporation (MIDC) plot at a throwaway price. The buyers were his wife, Mandakini, and son-in-law Girish Chaudhari. The final straw was activist Anjali Damania’s allegation that Khadse had failed to fully disclose the details regarding properties owned by him. She released documents saying he had purchased 88 acres in Jalgaon, his home district. The agricultural land was turned into land for ‘non-agricultural purpose’ (education), and then to residential land.

The opposition, led by the Congress and the Nationalist Congress Party, demanded that Khadse be sacked immediately. Congress spokesperson Sachin Sawant said, “Khadse met revenue and MIDC officials in March and obtained the entire information about the said piece of land in Bhosari. The information was passed on to his family members, so that they could purchase the disputed land. Accordingly, the land was purchased on April 27. This is a clear violation and breach of the oath of secrecy.”

Sawant pointed out that the cost of the land for which Gajanan Patil allegedly demanded a Rs 30-crore bribe was far too higher than what Khadse had claimed it to be. “Khadse had ridiculed Jadhav, asking, ‘how could someone demand a bribe of Rs 30 crore for a plot worth Rs 5 crore?’ But, going by the ready reckoner rates, the said plot is worth Rs 226.38 crore,” he said.

On June 4, after all his attempts to save himself had failed, Khadse drove to Fadnavis’s official residence and gave his resignation. Fadnavis said the BJP’s central leadership will take the final decision on the matter, even though Shah and Modi had given him a free hand. It was clear that he was not willing to exercise his authority, given the stature and seniority of Khadse, who was finance and irrigation minister when Fadnavis was mayor of Nagpur in the late 1990s.

Since May 30, Khadse had been camping in Jalgaon. He had skipped the weekly cabinet meeting to participate in a religious festival in Muktainagar, his constituency, and had been travelling in an autorickshaw instead of using his official vehicle. All this had fuelled speculation that he was on his way out.

Khadse’s last hopes rested on support from the RSS and Union Minister Nitin Gadkari, who advised him to meet Shah and present his version of the story. RSS chief Mohan Bhagwat declined to meet him, while Shah reportedly conveyed to Gadkari that Khadse should either step down or be prepared to be sacked.

Khadse’s resignation may have saved the BJP the embarrassment of sacking him, but the party’s image has taken a hit. While Fadnavis has a clean image, his cabinet colleagues Pankaja Munde, Vinod Tawde and Girish Bapat have faced allegations of corruption. The BJP, however, maintained that there was no need for them to resign. Khadse was not so lucky.

The main reason why Khadse could not be shielded was the fact that his family was involved in buying state-owned land. Adding to the BJP’s worries was the fact that Damania, who had blown the lid off the irrigation scam during the Congress-NCP rule, had gathered a wealth of information against Khadse. She had launched an indefinite hunger strike at Azad Maidan in Mumbai, demanding Khadse’s removal. Activist Anna Hazare had also declared that he would not hesitate to launch another agitation if he found that the government was shielding corrupt ministers.

Sources said Khadse took matters too lightly, was careless and ran his ministries as his fiefdoms. Apparently, district collectors were asked to refer applications to convert agricultural land to non-agricultural land to the minister. He also gave his aides free rein.

Shiv Sainiks in Jalgaon openly celebrated Khadse’s resignation. He had been on their hit list ever since the breakup of the Sena-BJP alliance before the 2014 assembly polls. Not only had Khadse advocated the snapping of ties, he had also volunteered to announce the decision to the Shiv Sena.

Claiming that he was a victim of a media trial, Khadse said he had requested Fadnavis to initiate an inquiry into the decisions he took as minister. “Nobody has come forward with any documentary evidence,” said Khadse. “I had given an open challenge to Sachin Sawant to prove me wrong. I had appealed to Anjali Damania to give evidence. I also said that if charges are true, I would quit politics. I have posted all the proof that I have on my Facebook account. This is a clear case of defaming the BJP and our government.”