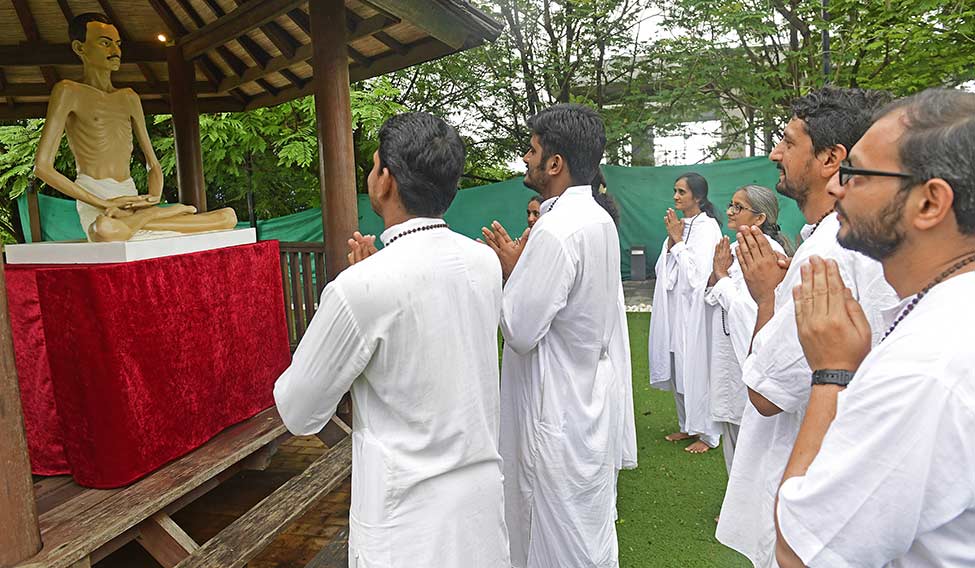 Devout and dedicated: Members of the Shrimad Rajchandra Mission pay their respects to their guru | Amey Mansabdar

Long before he became Mahatma, M.K. Gandhi faced a spiritual crisis in South Africa. His Christian and Muslim friends were pressing him to convert to their faiths. Gandhi wrote about his dilemma to his friend and mentor—a jeweller and diamond merchant in Bombay, whom he had met in 1891 upon his return from England.

Gandhi sent him 27 questions, and all the answers came promptly in a letter. The answers helped Gandhi resolve his doubts, and restore his faith in Hinduism.

The mentor was a Gujarati mystic, poet and philosopher named Shrimad Rajchandra, whom Gandhi mentions as Raychandbhai in his autobiography, The Story Of My Experiments with Truth. Raychandbhai was under 25 years old when Gandhi was introduced to him.

“He was a connoisseur of pearls and diamonds. No knotty business problem was too difficult for him,” Gandhi wrote. “But all these things were not the centre round which his life revolved. That centre was the passion to see God face to face.… I have since met many a religious leader or teacher. I have tried to meet the heads of various faiths, and I must say that no one else has ever made on me the impression that Raychandbhai did. His words went straight home to me.… In my moments of spiritual crisis, therefore, he was my refuge…. Though I could not place Raychandbhai on the throne of my heart as Guru,… he was, on many occasions, my guide and helper. Three moderns have left a deep impress on my life, and captivated me: Raychandbhai by his living contact; [Leo] Tolstoy by his book, The Kingdom of God is Within You; and [John] Ruskin by his Unto this Last.”

On June 19, Prime Minister Narendra Modi released a commemorative stamp and coin in the honour of Gandhi’s spiritual guide. Modi had mentioned the mystic-poet in his Independence Day speech last year.Gujaratis, especially the Jains, revere Rajchandra (born 1867) and are celebrating his 150th birth anniversary.

Rajchandra attained self-realisation at the age of 23 and composed Shri Atmasiddhi Shastra, a compilation of 142 verses, which deeply influenced Gandhi. “He was also known as a Shatavadhani (one having the faculty of remembering or attending to a hundred things simultaneously).... I exhausted my vocabulary of all the European tongues I knew, and asked the poet to repeat the words. He did so in the precise order in which I had given them. I envied his gift without, however, coming under its spell. The thing that did cast its spell over me I came to know afterwards. This was his wide knowledge of the scriptures, his spotless character, and his burning passion for self-realisation. I saw later that this last was the only thing for which he lived.”

Today, many institutions in Gujarat are spreading the teachings of Rajchandra. Prominent among them is the Shrimad Rajchandra Mission, founded by Jain scholar Rakesh Jhaveri, a modern-day mystic. He has followers across continents and is famous for his enlightening discourses. Dharampur is a beautiful town in the tribal belt of south Gujarat. This former princely state is home to the Mission’s international headquarters. The serene ashram stands on a plot of 223 acres in the Mohangadh hillock.

Mohangadh was not on the first list of sites chosen for the ashram. “One day, Rakeshbhai was visiting some of the shortlisted sites. Suddenly, he pointed to the hill and inquired about the place. He felt an intrinsic attraction,” said Abhay Jasani, president of the Mission in Dharampur. “We later discovered that Rajchandraji had spent 35 days in solitude here in 1900. He meditated at a crematorium and in the surrounding jungle, immersed in spiritual bliss.” The Mission runs a school, a college, a 60-bed hospital, a Mahila Gruh Udyog project, a skill development centre for school dropouts, a centre for the disabled and an early intervention centre, said Rakshit Shah, who has dedicated his life to the mission. He gave up a job at Tata Motors and took a vow of celibacy. Now he is known as Atmarpit Rakshit.

There are many like him at the ashram—doctors, engineers, lawyers and teachers. Their day begins at 5am ends at 9.30pm. The daily schedule includes yoga, meditation, prayers and rituals. The school and college, on the banks of the Man river, are surrounded by lush greenery. “Dharampur is known as Cherrapunjee of Gujarat; it gets nearly 150 inches of rainfall every year,” said Samir Ajmeri, principal of Shrimad Rajchandra Gurukul. “Our school has 350 students studying in class 9 to 12. Till class 8 they study in state-run schools. All students are enrolled after entrance tests.” Ajmeri recalled going house to house to enrol students when the gurukul was started in 2011. “We promised to pay for their education and other needs,” he said. “Many parents were reluctant, as they did not want to lose farmhands. We finally got 23 students in class 9 and 30 in class 11.”Shrimad Rajchandra Vidyalaya, the college, has more than 200 students. It is the only science college for students from about 250 villages in Dharampur and Vansda tehsils.

The Mission provides employment to 50 tribal women from villages around Dharampur. Some of them earn up to Rs 10,000 a month. The Mahila Gruha Udyog unit makes snacks and incense sticks.The hospital is most sought-after. It attracts patients from Maharashtra’s tribal areas, too. Take the case of Sai Shaktikumar Bachchav, a three-year-old afflicted by cerebral palsy. “Once while going to Nashik for the treatment, a truck driver told us about this hospital,” said his mother, Bharati. “After we got him admitted at the Early Intervention Centre here, Sai can sit without losing his balance.” Dr Girij Hood, who heads the Centre, said, “The day Sai managed to sit, his mother was in tears. Malnutrition is a big issue here and that can often result in congenital defects and development disorders.”

Dr Hood said the Mission was planning a 200-bed multi-specialty hospital in Dharampur “as we have to treat everything from snakebites and malnutrition to cancer, diabetes and hypertension, which are rising among tribals”.

What better way to connect with Him than providing succour to the ailing and the needy?