Modi is again scheduled to visit Gujarat on June 18 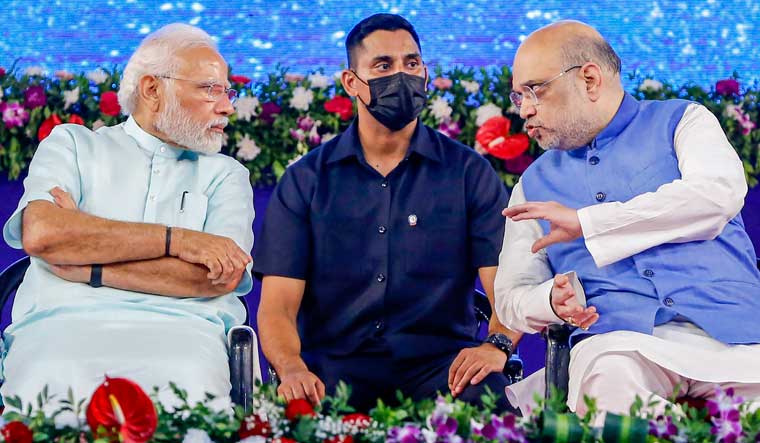 Prime Minister Narendra Modi interacts with Union Home Minister Amit Shah during the inauguration of the headquarters of IN-SPACe, in Ahmedabad | PTI

Gujarat is seeing more of Prime Minister Narendra Modi and Union Home Minister Amit Shah, as the state is gearing up for the assembly elections later this year.

Modi is again scheduled to visit Gujarat on June 18. He would visit the temple at Pavagadh near Vadodara and then address a public meeting. When he first won the Lok Sabha election, Modi had given up the Vadodara seat and retained Varanasi.

He inaugurated and laid foundation stones of developmental initiatives running into Rs 3,050 crore. It also included a multi-speciality hospital at Navsari.

During his recent visits, PM Modi addressed rallies in the tribal belt of Dahod, spoke to milk producers in north Gujarat and also attended a programme near Rajkot in Saurashtra, the area that is dominated by the Patidars.

In his last engagement on Friday, Modi inaugurated headquarters of Indian National Space Promotion and Authorisation Centre (IN-SPACe) at Bopal, Ahmedabad. Shah was also present on the occasion.

If sources within the BJP are to be believed, the PM is expected to visit Saurashtra at least twice more before the elections. He is expected to open Rajkot International Airport and the six-lane between Ahmedabad and Rajkot.

Though tribals are considered to be the vote bank of the Congress, the BJP fared well in south Gujarat in the 2017 assembly elections. And with C.R. Paatil, state BJP chief, representing Navsari seat in the lower House, the BJP is going all out to ensure that there is neither a dent in the number of seats nor the vote share.

On Friday, Modi spoke to beneficiaries of several projects and also met his teacher in south Gujarat.

Modi, as usual, highlighted the work done by his government, and challenged the opposition to show any one week in which developmental works have not been carried out in more than two decades. He said that they were not here to win the elections but to work for the people. “It is the people who elect us. We are in power due to the blessings of the masses,” he said.

The BJP had recently got a shot in the arm, with ex-Congress and Patidar leader Hardik Patel joining the party. Whether Patel’s presence proves beneficial for the BJP or not remains to be seen as there is discontent within the party and the Patidar community over Patel’s decision. But the fact is that the party will have one fewer headache.

Moreover, there might be good news for the BJP as the head of the Khodaldham Trust, Naresh Patel, has been delaying his announcement of joining politics. People in the know feel that Naresh Patel might decide against taking the political plunge.

He commands respect among the Leuva Patidars. Recently, he was seen sharing the stage with Chief Minister Bhupendra Patel at a programme in Rajkot. Few days back, he was conspicuous by his absence when PM Modi inaugurated a hospital at Atkot, near Rajkot. Sources said that Naresh Patel wasn’t invited.