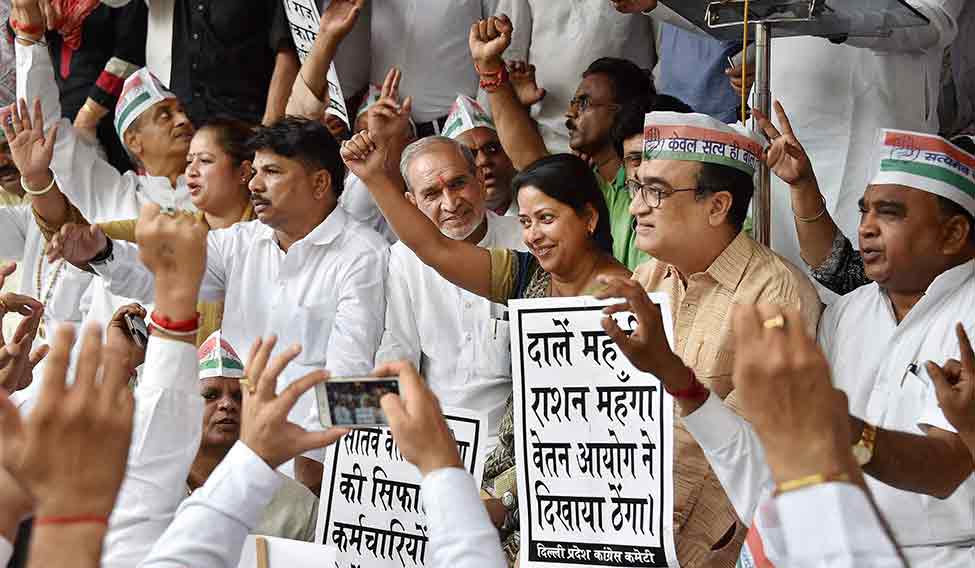 On June 30, a day after the recommendations were announced, representatives of major employees' unions had a meeting with Jaitley and his cabinet colleagues Rajnath Singh and Suresh Prabhu. While Prabhu was against any further hike, Jaitley was sympathetic to the workers' demands. “During our meeting, Jaitley said he would be considerate. We are now waiting to hear from him,” said Shiv Gopal Mishra, convener of the National Joint Council of Action (NJCA), a united front of the unions. “We have suggested a slightly higher fitment formula for calculating the minimum basic pay. Our formula would raise it to Rs 26,500 from Rs 18,500 suggested by the Pay Commission,” said Mishra. The unions, with a strength of more than 35 lakh, have threatened to go on a nationwide strike from July 11, if their demands are not met.

What seems to be a meagre rise of 08,000 for the lower grade employees translates to a huge wage bill, considering the sheer numbers of group C and group D employees on the Central government's payroll. They constitute close to 60 per cent of the total workforce. The unions are opposed to the Pay Commission's proposal to downsize lower grade recruitments.

The defence services, too, have expressed disappointment over the recommendations. While officers are unhappy that their demands regarding non-functional upgrade and parity with civil services have been rejected, jawans are feeling cheated regarding salary hike and military service pay. "Our demand for uniform pay has not been taken into account and our allowances have not been brought at par with civilian employees," said a senior officer. The government has already set up a committee to look into the anomalies.

"Military service pay should be equal for all and the government had assured us that it would be done. But while officers get Rs 15,000 as military service pay, jawans are getting only Rs 5,200. Even nurses are getting Rs 10,000. Is the value of a jawan's life is less than that of an officer or a nurse?" asked Vir Bahadur Singh, leader of an ex-servicemen's organisation.

Even as the government is working to placate the disgruntled employees, it has chosen to implement only the recommendations for pay revision and has ignored most other suggestions by the Pay Commission. For instance, the commission had recommended a performance-related pay scheme by moving from a ‘paying the position’ system to a ‘paying the person’ system. It would have resulted in a civil servant getting a higher variable pay for outstanding performance and a negative variable pay for insipid performance.

Several parliamentary commissions, too, have asked the government to create an accountable and transparent civil service by enforcing a set of objective criteria and procedures for appointments and promotions of senior civil servants. There have also been suggestions to strictly enforce the rules of official business by recording reasoned orders in writing. For instance, if the government wished to curtail the tenure of a civil servant, it must record its reasons in writing. The Narendra Modi government, however, chose to ignore these suggestions and decided to follow in the footsteps of the Manmohan Singh government by okaying just the pay hike while ignoring other suggestions by the Pay Commission.

According to many experts, arrears are immediate consumption boosters and, therefore, promote growth. "We need to keep in mind that rural demand is still quite low because of two consecutive weak monsoons. Interest rates are high compared with 2008-2010. These factors may not lead to a major growth like it happened after the Fifth and Sixth Pay Commission revisions,” said Ritesh Kumar Singh, group chief economist, Raymond Limited. Moreover, while the average pay hike during the Sixth Pay Commission was around 40 per cent, this time around, it is only about 24 per cent.

Despite the drop in the quantum of increase, consumer durable makers are hoping to net more cash in the upcoming festival season. “With more than one lakh crore income coming to employees and pensioners, we expect 5 per cent of it to be spent on consumer durables worth at least Rs 15,000 each,” said Krishan Sachdev, managing director, Carrier Midea India. He said the additional demand could also have a cascading effect and translate into higher foreign investments. Karthik Srinivasan, senior vice president of credit rating agency ICRA Limited, said the impact would be visible by the third quarter of the current fiscal and extend to the fourth quarter results of banks holding retail deposits first and then to the retail consumer sector.

An analysis of the Pay Commission recommendations by Kotak Economic Research has found that the resulting stimulus to private consumption would be around Rs 46,800 crore. The additional tax revenue is likely to be Rs 13,000 crore while household savings could rise to Rs 25,000 crore.

“Now that the Central government has accepted the report of the Pay Commission, state governments will follow suit after a gap of six months to a year, which will further stimulate private consumption over the next couple of years,” said the report.