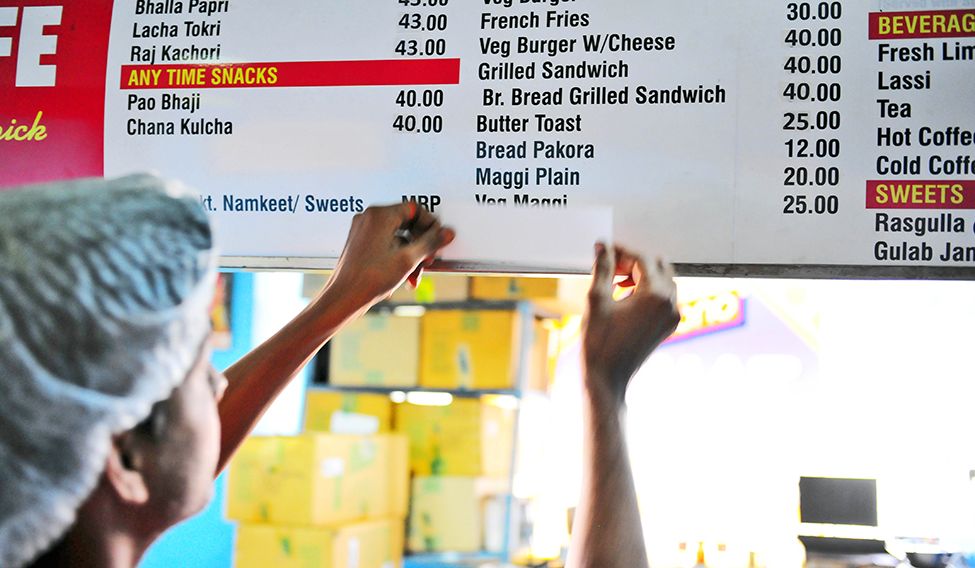 Out of favour: A salesman at a cafe in Delhi covers the Maggi items on the menu | Aayush Goel

Consumer affairs secretary Keshav Desiraju was rarely in his office early this month. Instead, he was seen spending long hours at the law ministry, preparing the government's case against food companies for failing to meet quality requirements. The case is pending hearing before the National Consumer Disputes Redressal Commission.

A food ministry official said the government was acting on recommendations of the Food Safety and Standards Authority of India and the case brief was being worked on to include processed foods, sauces and even restaurant food in the ambit of the larger case. The FSSAI, which is under the ministry of health and family welfare, has gone after food companies with an unusual alacrity. “We will not spare the rod. The guilty will be punished,” said Yudhvir Singh Malik, CEO of the FSSAI. He had advised the government to act suo motu against food adulterators and celebrities who had endorsed such brands.

On June 5, Malik sent notices to all states, advising state food inspectors to “confiscate and destroy brands in the market” that were being sold without FSSAI approval. The FSSAI has also advised states to test samples for rancidity, synthetic colours, preservatives and other anti-oxidants, and given specifications for moisture, ash and nitrogen levels in food samples and acceptable levels of lead, copper and other heavy metal components.

The heat of the controversy is felt the most in Gurgaon, where Nestle India, which makes Maggi instant noodles, is based. The company executives are working overtime after the government and the company announced a recall of the noodles. Even though Maggi lovers smell a corporate conspiracy against the popular brand of noodles, there is no denying that it was Nestle's responsibility to keep its products clean. In 2014, the company disclosed an annual expense of Rs445 crore on brand promotions and advertising, while it spent a meagre Rs12 crore to Rs20 crore on 'laboratory and quality testing'.

Nestle is trying hard to get out of the mess. The Swiss food giant asked shareholders to keep calm and unveiled a strategy for the Indian consumer market in 2015. “Indian economy is grappling with the two concerns of food security and nutrition,” said Antonio Helio Waszyk, chairman of Nestle India. He said it would be a breeze to come out of the current controversy with strong brands and a capable organisation in India. He has promised “bold” and “tough” decisions for portfolio reorganisation for premium product categories.

Nestle India is yet to respond to a legal notice to submit test reports to the Uttar Pradesh food safety department. However, it did make public two test reports of Maggi from its Pantnagar plant. The tests conducted by a laboratory in Kolkata mentioned test parameters of lead and other components but did not record higher than normal levels of monosodium glutamate. “The government had always relied on lab reports of food multinationals and that attitude has landed food safety guidelines in a soup,” said Mander.

Such a situation raises serious questions about the government's responsibility to provide clean water and food. “The nutritional deficit in our country is a reality,” said Kavitha Karungati, activist and food campaigner. “It is the poor who cannot afford milk, eggs and vegetables. And it is they who will be condemned to eat junk food.”

Your form could not be submitted.
This browser settings will not support to add bookmarks programmatically. Please press Ctrl+D or change settings to bookmark this page.
Topics : #controversy