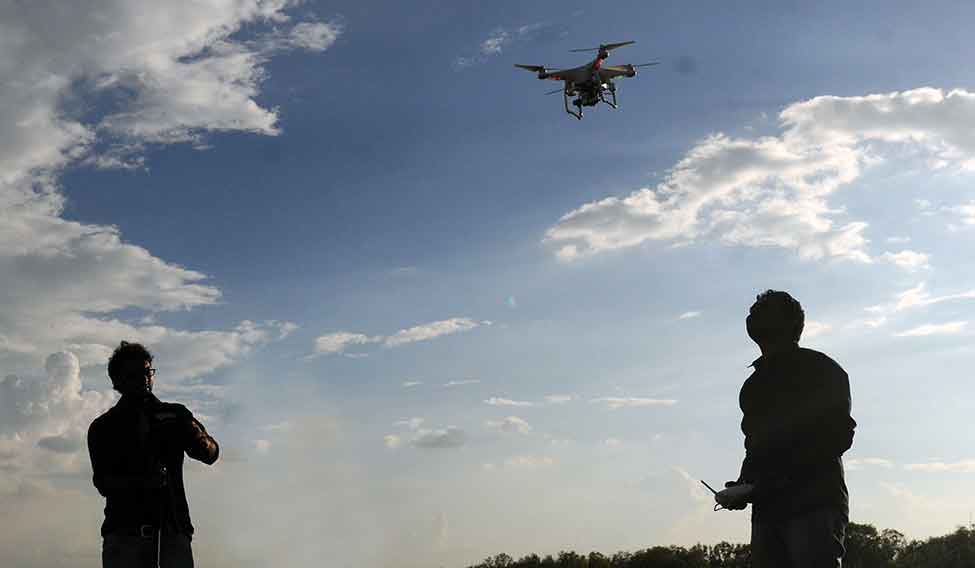 The move to regulate drones overlooks their utility and business prospects

Drones, probably the latest among the mechanical disruptors that have set both cash registers and alarm bells ringing, have been steadily opening up new business possibilities for a while. A report by International Air Transport Association says drones worth $10 million were sold in 2015. It predicts sales of 7 million drones every year till 2020.

Though yet to see mass adoption in India, drones are already seen as a headache by the authorities and are under restrictions. However, enthusiasts have found gaps in the policy, and the use of drones as a hobby and for commercial purposes is on the rise. In 2014, the Directorate General of Civil Aviation announced that use of unmanned aerial vehicles (UAVs) was restricted till new policies were formulated. Authorisation of drones would require permissions from the DGCA, the ministries of defence and home and some other agencies.

Later, the government set up an inter-ministerial panel of bureaucrats to draft the rules for the use of drones. The ministries of civil aviation, home and defence have agreed to put in place a policy that would control them. “Drones are a serious issue. Their use is still not covered under aircraft rules. So, if you are flying one, you are breaking the law,” said civil aviation secretary R.N. Choubey.

Since March 2015, the civil aviation ministry has been working on the operation guidelines for UAVs. “We will include its use in the civil aviation rules,” said Choubey. “If it is in the air it has to be regulated, monitored. We have recommended a registration requirement for drones with the DGCA. That will be a first step.” The ministry is looking at options like sim cards or registration microchips. These chips can alert authorities whenever a drone takes to the skies. Another option is to have infrared chips with a kill switch on all drones to restrict their movement near sensitive areas. “It is going to be a huge technological challenge for us,” said Choubey.

The authorities of late have been tough on drones. Some foreign tourists were apprehended for flying drones at the temples of Khajuraho, Mahabalipuram and Arunachaleswarar. The police have filed first information reports on flying drones near airports in Delhi, Kolkata and Mumbai. As per recent notifications by the finance ministry, drones have been included in the ‘prohibitive items list’ of customs. It is now mandatory to declare if a passenger is bringing drones go India. “We have, however, not banned drones considering its wide use for many social and creative purposes,” said Finance Minister Arun Jaitley at a media conference after his budget presentation in February. “A policy regulating imports of drones was necessary. Many ministries have expressed it as the need of the hour.” The budget had suggested raising duties on drone imports.

Biggest among the drone threats could be the one to passenger flights. IATA has been seeking a host of safety measures from governments. “Drones are dangerous,” said Tony Tyler, chairman of IATA. “They are a real and growing threat that we need to carefully deal with to not compromise safety in operations.”

Restrictions on drones are already in place in many countries. In the UK, the government has issued equipment that obstruct control signals of a drone from working within a three-kilometre radius of airports. In Hungary, the police are training eagles to nab drones that break the law. Turkey is also looking to do the same. In the US, the Federal Aviation Administration recently issued guidelines for setting up a drone registry and to regulate use of drones for commercial activity. Use of drones for hobby is allowed as long as they comply with ‘no fly’ guidelines as issued by state authorities or the FAA. “We are awaiting the FAA policy on drones, which is expected to be announced in April or May,” said an official at the civil aviation ministry.

Regulation, however, has not dampened the sales of drones in India, either offline or online. In Crawford Market in Mumbai, Ritchie Street in Chennai, and Karol Bagh and Khan Market in Delhi, sales of drones are going upwards. “Even if the budget makes drones expensive there will still be buyers,” said Bharat Bhushan, partner of Delhi-based AVCS System India. Bhushan’s company is the sole franchise of the leading Chinese drone maker DJI. “We arrange for extensive training classes for first-time users free of charge with their purchase,” he said.

Those who are unhappy about the budget decision are the many startups that are eyeing business models based on the use of drones. “Drones are the lifeblood of many startups. By prohibiting their import you are killing them,” said Harsha Kikkeri, director of advanced development at the US-based robotics firm Suitable Tech. “We are all for proper regulations. The robotics age has started with new actuators, sensors that act as raw input for any of these devices. Authorities should make good use of their knowledge to ensure that only drones with adequate safety measures are allowed.” He said indigenous and inexpensive sensor technology was available to make drones safer.

It is difficult to ignore drones' utility. For instance, the startup Aarav Unmanned Systems is readying an agricultural drone that can be used for mapping, flood planning and spraying insecticides and fertilisers on fields. “To make drones safer, investment in new technologies should be incentivised by the government,” said Yeshwanth Reddy, co-founder of Aarav. “If we are able to adopt drones fast enough, we could challenge the might of economies as big as the US or China. The possibilities of using drones could make our planning and design precise and effective.”