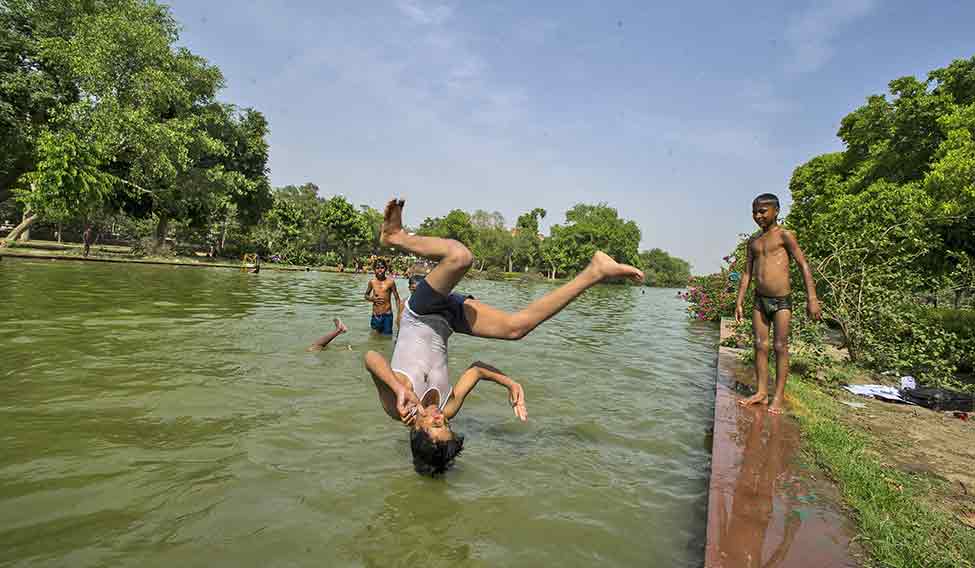 Dive and survive: Children trying to beat the heat at the boat club near Rajpath in Delhi | Sanjay Ahlawat

El Nino goes, La Nina comes. India could be in for an extreme swing in weather

For the past few weeks, India has been in the grip of a heatwave. More than 100 persons have died of heatstrokes in Telangana and Andhra Pradesh, where mercury is hovering above 40 degrees Celsius. In neighbouring Odisha, the number of heatwave-related deaths has crossed 30. Schools in several districts in Telangana have been shut down, while those in Odisha have been asked to break early for summer.

“Temperatures have touched 45 degrees Celsius,” said P.K. Mohapatra, special relief commissioner in Odisha. “This we usually experience in May. A decision to reopen schools will depend on the weather.”

The decision to close schools in Odisha came hours after the Indian Meteorological Department (IMD) issued an alert on April 19, saying heatwave conditions would prevail in Jharkhand, Gangetic West Bengal and Odisha for the next five days. Central and peninsular India are witnessing one of the hottest Aprils on record. For the past two weeks, temperatures in parts of Bihar, Maharashtra, Karnataka and Tamil Nadu have ranged from 40 to 45 degrees Celsius. Titagarh and Bankura in West Bengal have recorded temperatures above 45 degrees Celsius.

IMD says temperatures are ‘markedly above normal’ (5.1 degrees Celsius above the average) in parts of Uttarakhand, Punjab, Tripura, Haryana, Delhi and north Rajasthan. “This is worrisome, as these heat pockets often exist because of micro-climatic conditions prevailing in these places. This could be because of deforestation or emission from industries around the places,” said G.P. Sharma, head meteorologist of SkyMet, a private weather agency.

Both SkyMet and IMD have not predicted when the heatwave would abate. Meanwhile, soaring temperatures have inspired some clever marketing campaigns. In Delhi, Kolkata, Bhubaneswar and Hyderabad, retail chain Cafe Coffee Day and some air-conditioner retailers have announced discounts matching the day’s temperature.

Amid the scorching heat, what has brought some cheer is the forecast of an “above normal” monsoon. IMD said El Nino conditions, which had resulted in drought and inadequate rainfall in India for the past few years, are waning. “It [El Nino] is expected to reach neutral by mid-summer,” said K.J. Ramesh, director of longterm forecasting at IMD. “Thereon, La Nina conditions are possible…. If that happens, we expect changes in rainfall pattern. Snow cover, too, is likely to increase.”

IMD has said that the southwest monsoon, which starts in June and ends in September, will be “fairly well-distributed”. “We are expecting a fair distribution of rains, which could be slightly less than normal over northeast, south and eastern India,” said Ramesh.

Parts of Marathwada and Bundelkhand and some areas on the western coast will get less-than-normal rains this year. With La Nina setting in, there could be floods and an extreme swing in weather in the subcontinent. “Extremely heavy rainfall over a short period of time can occur in many places, and can cause sudden inundation,” said IMD director-general Laxman Singh Rathore.

But, for now, a water crisis seems more immediate than chances of the heavens opening. On April 14, the Central Water Commission said water levels in the seven main rivers and 91 major reservoirs had dropped to a mere 23 per cent of overall capacity. Also, the levels were lower than last year’s by 20 to 25 per cent.