They can no longer trust the Arabian Sea 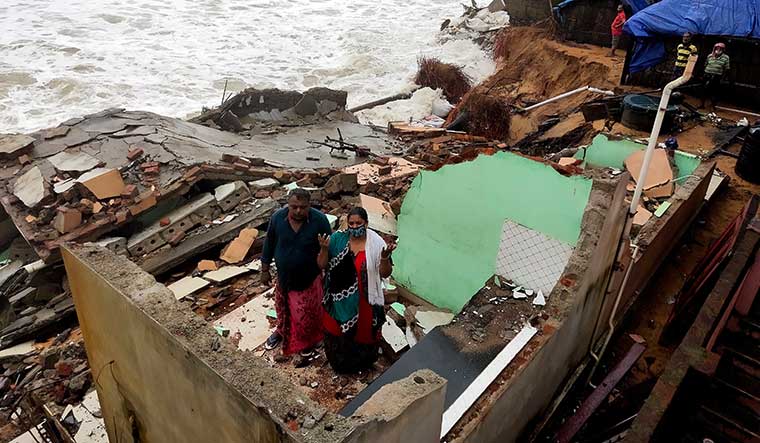 Taken by the sea: A house destroyed by coastal erosion at Vettukadu, Thiruvananthapuram, Kerala | R.S. Gopan

PERCHED ON TOP of a cracking wall, Godson, 48, looked silently at the dark sea. He is a security guard at the Madre De Deus Church, Vettucaud. Standing almost in the shadow of the great church, he looked like a statue. When pilgrims tried to cross the rope cordon in front of the wall, he shouted: “Do not cross it; there are no steps, there is no beach....”

To those who were sceptical, he added: “Everything has been swallowed by the sea. This wall could fall at any time.”

Some stepped back after hearing it. Others, who were still suspicious, tried to get a good look at the darkness beyond the walls. “When we came to the church last year, I had seen kids playing football on the beach. The beach was so wide and long,” Gomez Eliaz from Kollam said in disbelief.

Godson did not respond and looked blankly at the sea. “Everything has changed…” he mumbled.

A native of Periyathura, Godson had been an active fisherman till a few years ago. “Ockhi changed my life,” he said. He was talking about the “very severe cyclonic storm” that hit the Indian coast in November 2017, killing 365 persons. “The coast is being eaten up by the sea. There are not enough fish anymore. How long can one see kids go hungry to their beds? So, I stopped going to the sea and took up this job,” said Godson, adjusting his cap. “At times, I miss going to the sea.” He glanced at the lights of the fishing boats in the distance.

Some 150km away in Kuroor, Alappuzha district, Sivadasan K., 55, was busy emptying his fishing net. Helping him was his son Akhil. There was an empty orange bucket next to him. “I have not got any catch in the last two weeks...,” he said without taking his eyes off the net, which contained only chori (jellyfish). “It will cause severe itching if it touches your body; this is all we get after spending hours in the sea these days.”

Akhil is in class 11 and wants to pursue marine engineering. “Even if we die of hunger, I will not send my son to the sea,” said Sivadasan. “She is no longer our kadalamma [sea mother]; she has become a demon.”

That they no longer recognise the patterns of the Arabian Sea is a complaint one gets to hear across the Kerala coast. “We knew the currents, the wind flow and the water temperature. We used to predict the quantum of the fish catch. But traditional wisdom does not work anymore,” said Ponnan, 65, a fisherman from Beypore, Kozhikode.

This is his 50th year at sea. “I knew the sea like the back of my hand.... but I no longer understand her mood swings,” he said, as he emptied the meagre catch he had managed to get after spending six hours at sea and spending Rs800 on diesel. It may fetch him a maximum of Rs100 in the market. “Going to sea only adds to our debts these days,” he said.

The data does say that the fish caught on the Kerala coast has come down drastically. Total fish production in 2021 had been just 3.9 lakh tonnes—one of the lowest catches in 50 years. It had been consistently around 6 lakh tonnes in the last decade.

The decrease in the availability of fish, especially sardines—the most sought-after fish in Kerala—is hitting the economic stability of coastal communities. The annual study report of the Central Marine Fisheries Research Institute says that the sardine catch was just 44,320 tonnes in 2019, and the yield dropped to one-third of that in 2020. It was 4 lakh tonnes in 2012.

“The government had stopped us from going to sea on 84 days in the last four months [of 2021], because of the IMD’s [India Meteorological Department] weather alerts. Once the alert is issued, the government’s job is done. But what about us, how will we survive?” asked Dasan B., a native of Ayikkara in Kannur. Adding to the depleting catch is the rapid sea erosion happening across the coastal belt, more so in central and southern Kerala. Many coastal villages like Chellanam in Ernakulam district, and Vizhinjam and Poonthura in Thiruvananthapuram district are increasingly becoming vulnerable to sea erosion.

The fisherfolk attribute everything from the sea getting warm to sea-level rise and the fall in catch to Ockhi. “Because that was a tragic event of immense proportion for them,” said A.J. Vijayan, an activist in the coastal belt. “But the fact is the sea had been changing for more than a decade, but that has been happening gradually, and nobody noticed it.”

It is not just the fishermen who are feeling the brunt of the changes in the Arabian Sea. The boat owners, fish vendors and middlemen in the harbour are also facing the heat. “The only people who are flourishing are the money lenders. Everyone else here is in debt,” said Jackson Pollayil, state president of Kerala Swathanthra Matsya Thozhilali Federation, a fishermen’s union. “The rest of the society feels the heat of the changes in the Arabian Sea only when the price of the fish shoots up. But for us, it is a day-to-day reality that threatens our lives and livelihood.”

The fisherfolk, in general, are said to be optimistic and resilient. “One would get to hear about farmer suicides very often,” said John Kurien, an expert in the field of fisheries. “But you rarely get to hear about the fishermen committing suicides because they know from their traditional wisdom that a good day will come after a slew of bad days. But now a time has come when the fishermen have started doubting this traditional wisdom.”

And that certainly is a bad omen!