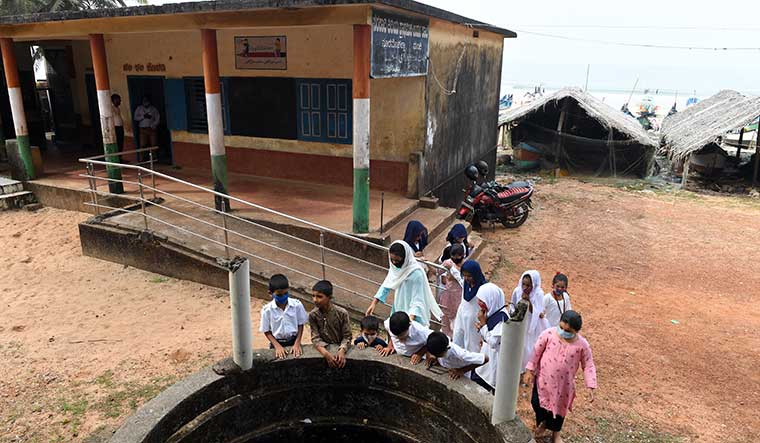 Not a drop to drink: A school close to the sea in Honnavar, Karnataka. It has no drinking water because the open well now yields saltwater | Bhanu Prakash Chandra

HANUMANTHA THIMMAPPA Naik, 55, a farmer from Sanagunda in Honnavar, Karnataka, left his farmland and migrated to the nearest town in recent years. His two brothers continue to farm in their three-acre plot in the village—but with fears about unseasonal rains or seawater destroying their crops. “We are a joint family,” says Naik. “We cannot survive in the village, because saltwater is entering our paddy fields. We had sown salt-resistant paddy varieties like kagga and halaga, but failed to get a good yield. [My brothers] are now trying their luck with the saavira ondu variety, which can give up to 40 per cent yield. But if saltwater enters the fields, the yield will be zero.”

Vinayak Naik, another farmer from the region says: “As a child, I used to see several families growing paddy, peanuts and sugarcane. We used to get three crops in a year. But now, people are abandoning the lands as they cannot grow even a single crop. The soil texture has changed and become useless for agriculture.”

Honnavar is a port town in Uttara Kannada of Karnataka. It is here that the Sharavati river meets the Arabian Sea. Cyclones, coastal erosion, fish famines, destruction of paddy fields and wells yielding saltwater—the taluk had witnessed several climate disasters over the last few years. The region is witnessing a conflict between the land and the sea.

“Expansion of oceans and melting of glaciers due to global warming is causing a rise in sea level. This is causing saltwater ingression into agricultural fields and salination of groundwater,” says N.H. Ravindranath, professor, Centre for Sustainable Technologies, Indian Institute of Science Bengaluru.

The island villages in Manki in Honnavar taluk are populated by backward communities like Namdhari, Sherugar and Idiga. The estuarine fields in which they work are slowly turning into salt marshes. Coastal flooding and coastline erosion are also becoming common in the region. Usman Hodekar, a local leader from the region, says his family has been living on the coast for 50 years. “In my childhood, we had to walk quite a distance from our home to reach the sea,” he says. “But now, the sea is inching closer. Sometimes, we are scared to sleep as the sea is almost at our doorstep.”

Dr M.N. Nayak, an ayurveda practitioner in Thoppalkeri village, said: “The seawall was washed away in a cyclone; water entered our homes, and the roofs were blown away. We have nowhere to go, we are living in fear. Prolonged monsoon and frequent cyclones have become the norm in the region.”

The west-flowing Sharavati river is steadily swallowing Karki village of Honnavar. “The river mouth has been moving northwards. This has altered the landscape,” says Krishnamurthy Hebbar, a social activist and senior journalist from Honnavar. Change in wind direction is cited as the reason for the shifting of the river mouth. “More than 300 acres have already been lost to the river as the sea is pushing the river inwards and onto the land,” adds Hebbar. “A village named Mallukurva no longer exists; it got submerged. Other villages in Honnavar—Karkikodi, Mavinakurva and Hegdehitlu—are also feeling the effects of coastal erosion.” All these vanishing villages are testimony to the ruinous effects of climate change on Karnataka’s coastal belt.

“The shifting of the river mouth is being exploited by the land mafia to usurp villages like Mallukurva,” says Dr Prakash Mesta, a marine biologist. “The river mouth has moved from Mallukurva to Kasarkod.”

The Kasarkod beach is now the epicentre of a protest against an upcoming private port. Locals complain that politicians are allowing big development projects without any sound rehabilitation plan for the local communities. In January, hundreds of fisherfolk jumped into the sea to stop a private firm from demolishing their homes. “The massive construction will aggravate the sea erosion and flooding in the coastal villages,” says Hebbar. “Heavy dredging [for the port] will affect marine biodiversity and snatch the livelihood of small fishermen.”

The fear of the locals is not misplaced. Scientists have flagged estuarine integrity as a requirement for sustaining marine fisheries. Marine fishes and prawns enter the estuary for breeding, and juvenile fishes grow in the estuary. Unless the estuaries are protected, the fish stock cannot be preserved, say experts.

Shankar Harikanta, 37, from Manki village said that both fish variety and quantity have dropped due to mechanised fishing. “We go every morning at 4am and come back at 8am. But we do not make enough to sustain our lives. We are now forced to go farther into the sea for a good catch. Back home, we have no drinking water as open wells have turned salty.”

According to Ravindranath, who has co-authored multiple UN Intergovernmental Panel on Climate Change reports, fishes are migrating toward the northern latitudes due to the warming and acidification of oceans. “Just like the agriculture crops, the nutrient value of fishes is decreasing,” he says. “Overextraction of fishes, bad fishing practices and pollution are affecting marine biodiversity, and climate change is only aggravating the problem.” The seasonal pattern of fish availability has been altered due to changes in water temperature and water currents in the region—another impact of climate change. The traditional fishermen are now finding it increasingly hard to predict the fish species available in different seasons.

Says Yathish Baikampady, CEO, Panambur Beach Tourism Development Project: “The construction of railways, highways and ports along the coastline have destroyed the coastal ecosystem, and the mechanised boats are ploughing through the sea, destroying fish habitats and breeding sites. The [people from] fishing communities are now ending up as daily wagers in the city malls. There is a need to make the fishing communities climate-resilient.”

Scientists estimate that Karnataka will witness a 10 to 25 per cent increase in rainfall by the mid-2030s. Coastal districts like Uttara Kannada would see high-intensity rains and more flash floods in the coming years. It is also estimated that one-third of the biodiversity in the Western Ghats region of the state will be damaged by 2050, and fish production in the sea will suffer due to acidic oceans. These would affect the already stressed infrastructure, housing, fisheries and agriculture in the southern state.

Ravindranath points out that to build resilience in the coastal communities and farmers, the government should extend crop insurance, encourage selective breeding of salt and temperature-tolerant varieties of fish in the inland region, restore the mangroves and promote growing salt-resistant rice varieties.

“The government would give a compensation of Rs3,000 whenever cyclones devastate our lives,” says Kamalakar Babushettru, an old-timer from Pavinkurve village in Honnavar. “As farming is impossible due to saltwater seepage in the soil, I bought two cows to earn a living. Some of our neighbours used to till huge tracts of land. But, now people have to be content with the free rice being given by the government!”