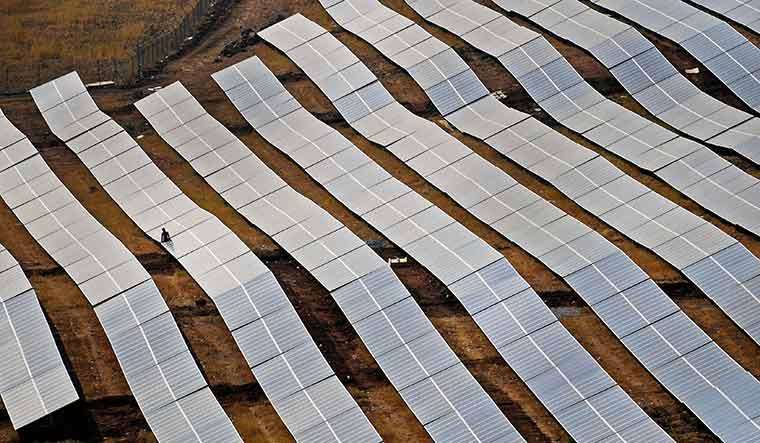 IN THE UTOPIAN world of today’s climate campaigners, wind and sun will energise the earth. The air conditioning in your home and the boilers in the factory, cars on the road and even planes in the sky will be powered by harnessing the sun’s heat and the wind’s might, tidal and geothermal power, and bio fuels. No more digging the earth to excavate coal or drilling the seabed to get petrol. Humans will not be pumping tonnes of carbon into the air, and therefore, global temperatures will not rise. A net zero emission and 1.5° Celsius (temperature rise) will be attainable.

The green dream is tempting. But everyone, including its campaigners themselves, know that it is unattainable with the technology and consumption patterns of today. They might frown upon India for refusing to detach its development needs from coal and gas, but the truth is that solar panels and windmills alone cannot lift India into an economy that matches those in the west. Worse, there is a cost to pay for these alternatives. Indeed, just how green is green energy?

Renewable energy sources, as of today, face the problems of scalability and storage. Regular supply is another problem. For instance, if a photovoltaic cell says it has a capacity of 10KW, it means the cell will generate that energy when it is new, and also when the sun is at its brightest. Given the wear and tear of panels, and the fluctuation in sunshine during the course of a day and across seasons, the actual energy generated by that cell will be much lower, said Gurudas Nulkar, economist-turned-ecologist and author of Ecology, Equity and the Economy: The Human Journey.

The manufacture and installing of solar and wind farms come with a massive environment cost. Mandar Datar, plant ecology scientist, said that the choice for solar farms was usually open tracts of lands, supposedly non agrarian. However, grasslands have their own role in ecology and biodiversity, which get destroyed when these farms come up. He said wind farms across the plateaus of Maharashtra have already begun destroying the fragile ecosystems of lateritic outcrops that nurture unique lifeforms that may not be found anywhere else on earth.

These gigantic blades can only be transported by long bed trucks, for which one needs to build proper roads right up to the site. For installation, the rock bed has to be blasted and filled with cement. Every windmill needs one ton of oil for lubrication, which is then discarded at the site itself. They also need to be cleaned with harsh chemicals to remove algal growth, which too, are left at the site. These plateaus are sources for springs that once nurtured not just local ecology but also human habitations. “All this, for a 25 per cent yield. The Energy Return on Energy Invested (EroEI) for wind farms is minuscule,” said Nulkar.

The worst that windmills do, however, is eliminate the raptors from the region. These birds of prey hit against the blades and die in big numbers. Research at the Chalkewadi Wind Farms in Maharashtra a few years ago revealed a drop in raptor population and corresponding rise in lizard population, given the absence of their predators. The lizards, however, responded poorly to stress, not a good trait for their long-term survival, in the new environment, which, researchers concluded, was the direct result of the elimination of their predators. The lizards were so unafraid that they let the researchers come extremely close to them. Is it any wonder that from an ecologist’s viewpoint wind farms are a nightmare? Ironically, wind farms are exempt from environmental impact assessment.

“There are plans for installing solar panels over canals. A good idea to optimise space, maybe, but what will happen to the diatoms that need sunshine to grow and are the agents for huge carbon sequestration?” Nulkar asked. These diatoms nurture the chain of aquatic life. Once gone, the entire chain crumbles.

Solar panels and wind turbine blades both come at a high energy, and usually, carbon-intensive cost of production. India has largely been importing solar chips from China, the Atmanirbhar aspect is largely limited to assembling the panels here. Wind turbine blades are usually made of fibreglass, and the emissions they give out during the manufacturing stage are extremely high. Only a tiny component, if at all, is manufactured with ‘green energy’.

At the end of their lifecycle, too, these components are polluting, crowding landfills—and in the case of solar panels—leaching chemicals, too. The life of a solar panel is around 25 years, a wind turbine around 15 to 20 years. In the absence of any policy, this waste itself could become a huge problem in the years to come, given the boost to scale up renewable energy production.

“There are emissions associated with all activities. What is important is that renewable energy infrastructure does not continue to emit carbon dioxide through its entire lifetime,” said David Antonioli, an international expert on environment and voluntary carbon markets. That may be true. However, as renewable energy infrastructure scales up in India to compete with traditional coal and fossil fuel ones, it is not a bad idea to scrutinise each project and look for the hidden carbon footprint.