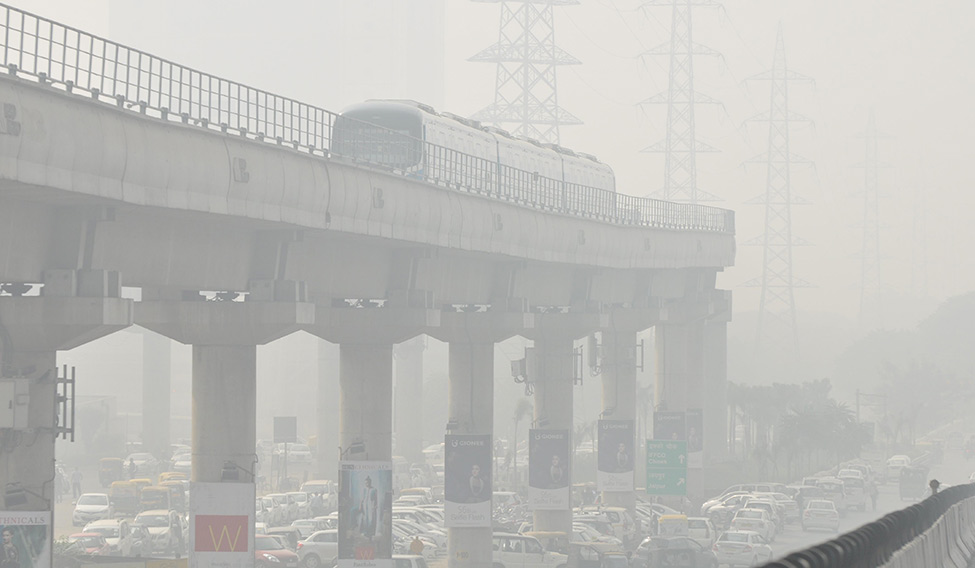 Hazy future: Delhi after Diwali; more than 1,800 schools in the capital stayed shut.

Smog clears in Delhi, but there is still no clarity on how to deal with air pollution

As Delhiites celebrated Diwali on the nights of October 31 and November 1—proverbially to drive away darkness and evil—pollution levels in the capital hit the red line, at a count of 1,640 micrograms of particulate matter per cubic metre. At the Delhi Pollution Control Committee’s office in Kashmere Gate and the India Meteorological Department’s office in Delhi’s international airport, the graph maxed out, indicating pollution level higher than what the sensors could detect any further.

Pilots, arriving at and waiting to depart from the Indira Gandhi International Airport, reported soot-covered windshields. Poisonous gases in Delhi’s air, due to still air and burning of agricultural stubble in Punjab, Haryana and Uttar Pradesh, made it difficult for people to breathe and drive.

Air over areas like Anand Vihar and Punjabi Bagh in the capital remained the most polluted, DPCC data showed. Areas near the two arterial ring roads also reported high volume of pollution, but more worryingly, levels for carcinogenic gases like benzene emitted from petrol and diesel vehicles were reported to be unusually high during the week from October 31 to November 6.

A pile-up involving 20 cars on Yamuna Expressway was reported on the smog-filled night of November 2, with seven people being killed in the accident. Several others, mostly children, reported chest pain, breathlessness and dizziness.

More than 1,800 schools in the capital stayed shut. Productivity in the capital and NCR dipped. An Assocham survey among HR managers of top corporates in the region found that employers faced a 5-10 per cent rise in absenteeism as more employees reported sick. Work from home and flexible work hours were introduced by organisations to tackle the situation.

Another survey noted that sale of air purifiers in the city increased by more than 50 per cent after the week-long ordeal with polluted air. “Both expensive and cheaper versions are selling very quickly. We have asked companies to improve our supply of air purifiers and their filters,” said Raghuvir Nrula, an electronic goods retailer in Khan Market. Pollution masks, too, were selling like hot cakes. Said K.J. Ramesh, director general of IMD, “There was an anti-cyclone near the base of the Himalayan range. This is normal at this time when seasonal changes take place and the direction of winds changes. But this year, Diwali also coincided in this time period.”

Ramesh warned that Delhi would be left with a pollution level of 600-700 ppm, which is already six times higher than government’s own standards (100 ppm) and 12 times higher than the WHO’s standard (of 560 ppm) for healthy air. Ramesh said that the oncoming northern winds alone cannot resolve the issue as the pollution would be carried to other cities in the hinterland.

Union Environment Minister Anil Dave held an emergency meeting with environment and agriculture ministers of Delhi, Punjab, Haryana and Uttar Pradesh to address the crop burning issue and to take measures to tackle pollution. During the meeting and even after it, an anxious Dave kept asking his aides and journalists, “Has the wind started to blow?” On being informed that the wind indeed had picked up, Dave sighed a breath of relief and sent out a prayer with eyes closed and hands folded on his forehead.

Said Dave, “We have been insisting all states, including Delhi, from December 2015, to adopt our [Central Pollution Control Board’s] 42-point charter to check pollution in the capital. But when we ask how many of them are being followed, we see nothing has been done.”

The pollution charter was circulated in December after a similar smog had engulfed the capital and caused citizens to choke. Last year, Haryana, Punjab and Uttar Pradesh were asked to advise paddy farmers to find better ways of tackling plant stumps left on fields. Punjab and Haryana have denied responsibility of crop burning causing pollution in Delhi.

For Delhi, the charter sought vacuuming of roads, sprinkling of water to settle dust periodically, and restriction of trucks coming into the capital from outside. Dave said that in Haryana farmers had adopted newer methods to deal with crop waste by collecting and decomposing it to make fertilisers.

Said Dave, “We asked them to vacuum the streets, implement curbs on construction sites, but nothing has been done.” When asked what he would do if states failed to meet the requirements, Dave said, “We will talk to them again. In a democracy, I cannot come inside your house to keep it clean. You will have to do it on your own.”

Experts agree that initiatives like the yearly pollution calendar could help the situation. “We need responsibility fixing for agencies. Right now, trucks from outside pass through Delhi to move into other states. This is permitted despite a ban in place on movement of heavy vehicles in the capital,” said Sunita Narain, director, Centre for Science and Environment.

On November 7, the CSE submitted a PIL in the Supreme Court seeking to know the action taken by the government and its agencies to ensure that pollution is controlled in time.

“We need to stop burning wood, coal and petroleum in any manner and anywhere to take care of this problem,” said Dave, a day before leaving for Mexico to attend the COP-21 talks on climate change.

The Delhi Medical Association has asked citizens to stop using agarbatti at homes during their prayers and burning dead bodies on wooden pyres. Said Rakesh Kumar Gupta, president, DMA, “The state government should immediately arrange for more electric or CNG-operated pyres and stop all wooden pyres.

After last year’s smog, the public works department in Delhi had purchased four street vacuum machines to clean roads. But they are not working for lack of proper maintenance.

The Delhi government, on November 7, issued an urgent order preventing burning of garbage piles and leaves, and said action would be taken against culprits under the Air Pollution Control Act. Allowing garbage to burn in Delhi’s two large garbage dumps—Bhalaswa and Gazipur—was stopped on November 5.

As the air clears above Delhi, pollution levels are still not normal. The cocktail of poisonous gases from Delhi have engulfed monuments like Agra’s Taj Mahal, and cities like Kanpur and Lucknow.

In China, which used to be the most polluted nation, a law to ensure cleaner air was adopted.

Said Janine Kuriger, director and counsellor, Swiss Agency for Development and Cooperation, “China used the Swiss example for an enactment. In Switzerland, we faced such a crisis and felt the need for a law in the seventies, when a number of tunnelling operations for rail and roadways were underway. India, too, could look to bring in place a separate enactment to have clean air.”