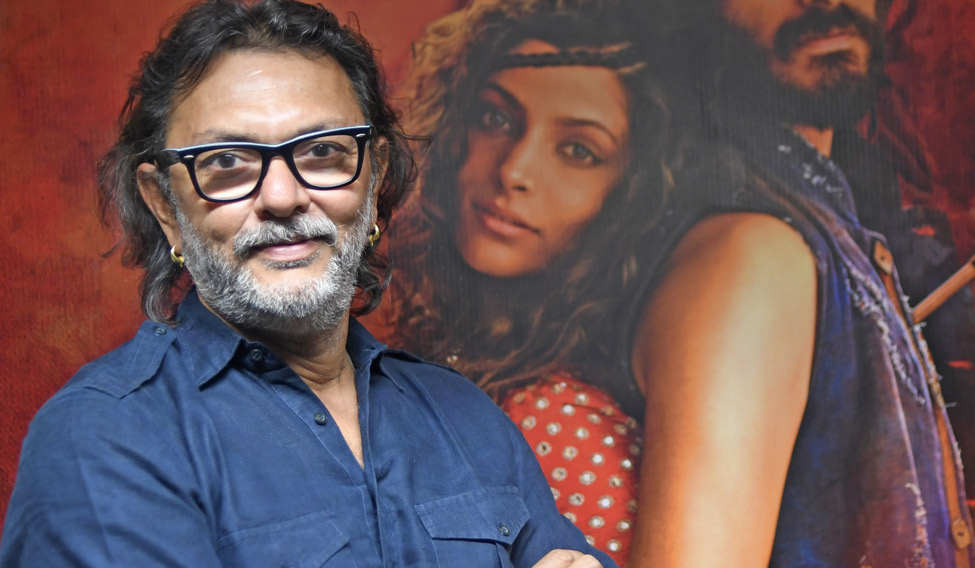 Back with a bang: Mehra standing next to a poster of Mirzya | Amey Mansabdar

A leading American trade magazine used the term (Un)Bollywood to describe his 2009 release, Delhi-6, and filmmaker Rakeysh Omprakash Mehra evidently takes pride in it. He made a blatant mention of it during an hour-long chat on a rainy Saturday evening in his Bandra office, ahead of the release of his romantic-musical drama Mirzya.

Mehra doesn’t like the term Bollywood, he confessed. He hasn’t been to a film institute, and his training was by watching films. He called filmmakers like Bimal Roy, V. Shantaram, Guru Dutt and K. Balachandran his masters. Later, with exposure to world cinema, Mehra found inspiration in the works of Akira Kurosawa, Krzysztof Keislowski, Federico Fellini and the likes. “It’s a crazy mix,” he said.

Over the course of 16 years and five films, Mehra has made sure that he doesn’t repeat himself. A subtle socio-political theme binds his films, but largely each of it remains different from the other. He isn’t political, Mehra said, “But whatever happens in society moves me deeply. I see the pain of others. I get affected by the stories of corruption. Intolerance in religion, caste, etc. disturbs me.”

Mirzya is inspired by a famous folklore of Punjab, Mirza Sahiban. The tale has haunted Mehra ever since he watched a play based on it during his college days in Delhi. After eloping with Mirza, Sahiban breaks the tip of Mirza’s arrows in anticipation of a war between him and her family members. “All these years, I wondered why Sahiban broke his arrows. The question in Mirza’s eyes stayed with me.”

Almost 25 years later, Mehra called up Gulzar to find the answer and together they set out on a journey. Gulzar has returned to screenplay writing after 15 years (his last was Aks in 2001, which he co-wrote with Mehra).

Based in Rajasthan, Mirzya oscillates between the past and the contemporary times. “I am very influenced by the younger generation,” said Mehra. “The youngsters today have really come out of the closet, especially the girls. It hasn’t happened in a big way but it’s happening in leaps and bounds, and there is no coming back. Thank God, I have a daughter [Bhairavi] who is now 17 and I understand a lot [about the world] through her. The story of Mirzya brings out that. It is about choices.”

Mirza Sahiban has been adapted many times in India and Pakistan. But Mehra didn’t want to document the history. “I wanted to recreate and set it in today’s time. My research, thus, was about today’s world—trying to understand the youth—their aspirations, their thought process. With Mirzya, I should relate to them in an intelligent way rather than paint a song and dance picture, and belittle them. Yes, they are all looking for entertainment, but that doesn’t mean you take them for a ride,” said Mehra.

Mehra’s films are always non-linear. If Rang De Basanti saw a weaving together of historical facts in a college of today’s time, his last release Bhaag Milkha Bhaag beautifully captured the journey of the athlete Milkha Singh from the pre-independence era to the post-independence era.

Cinematographer Binod Pradhan, who often works with Mehra, said Mehra’s style set him apart. “It’s interesting when for the same story you are capturing different timelines,” said Pradhan. “You don’t have to set the entire film in the same vein, the canvas is large and wide.”

Another aspect binding Mehra’s films is the self-discovery the characters go through. Aks, a super-natural thriller, was entirely about that. “My nani [maternal grandmother], whom we called Immi, used to lie us down and narrate stories of the Ramayan. However, she spoiled it for us and said the Ramayan was just a tale written by Valmiki and, over time, the characters became gods. She said good and evil reside in us. My device to find both was a paranormal thriller,” said Mehra.

“I made Delhi-6, which was an extension of Aks—finding Ram and Allah together. Religious intolerance was tackled through Delhi-6,” said Mehra. After that came Bhaag Milkha Bhaag, which was about fighting one’s own demons. “There, I completed my trilogy,” said Mehra.

Five films in 16 years may seem too little. But when you meet Mehra, you know the answer. Before we began the interaction, Mehra wanted to pick a book from his stacked-up bookshelf to place it on the sofa before the picture was clicked. He scanned through the shelves. He almost took out a book on Disney, but no, that wasn’t what he wanted. The book was pushed back. He scanned again. This time, he settled for Hitchcock/Truffaut. “I always take my time to develop the story; once the story is there, I take my time to cast,” said Mehra, who had initiated work on Mirzya began even before Bhaag Milkha Bhaag was released in 2013.

After Bhaag Milkha Bhaag (it made $165 crore at the box office), there was pressure to repeat the financial success. “When I started on Mirzya, everybody wanted me to take established actors, and if you don’t do that you don’t get enough money to make the film,” said Mehra. But his instincts told him to go with newcomers. He finally cast four newcomers—Harshvardhan Kapoor, Saiyami Kher, Anjali Patil and Anuj Chowdhury—in the film and “had to cough up half the money” himself. But that is how Mehra works—on his own terms.

“That’s why he breaks many norms,” said actor Divya Dutta, who has worked with Mehra in Delhi-6 and Bhaag Milkha Bhaag. “After the appreciation I received for playing Shabbo in Veer Zaara [2004], everybody was offering me similar roles until Mehra came with Jalebi [her character in Delhi-6]. I asked him if he was sure and he nodded in affirmation. That is what sets him apart, his belief in himself,” said Dutta.

Micro-management is not Mehra’s cup of tea. It was evident in his statements. When asked about his fine choice of music, Mehra said, “I am from a radio generation. I have never seen music. I have always heard it. When I hear a song, I wouldn’t say voice badlo, tabla daalo, etc. I would just say, ‘Hey, I am not feeling good listening to it’. It’s not my job to change things.”

Mehra’s trust in his teammates is reflected in the way he talks about his wife, P.S. Bharathi—the editor for all his films. “With Bharathi, it’s been an incredible journey. She is the biggest critic of my work. And my work finally ends on her lap, on her [edit] table and she changes it all. She does it her own way. After that, it is like take it or leave it,” said Mehra.

Bharathi, who is also a parnter in Mehra’s production company ROMP, was a huge contributor to the way his life shaped up, he added.

While Mehra is “not greedy for box-office collections”, as a filmmaker he wants his money back. Said Mehra, “I am going to make a story now on an eight-year-old kid who wants to make a toilet for his mother. This family stays in a jhuggi [slum].” Mehra said he won’t be spending more than $5 crore on the film. “I have come to realise, it all depends on the subject of the film. But filmmaking is an expensive proposition, and my canvas is only growing,” he said. “Monetary success matters because a decent profit will lead us into making another story we want to tell.”