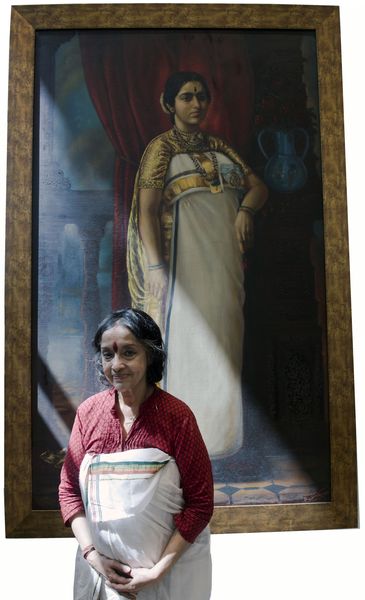 Following the merger of princely states into the Indian union, Bangalore became home to a little princess. Granddaughter to Sethu Lakshmi Bayi—the last maharani of erstwhile Tranvancore—Bharani Thirunal Rukmini Bayi (Rukmini Varma) and her six siblings lived in obscurity, in the garden city, and carved out their own destinies. She reigned as an internationally acclaimed painter, before she pushed herself into oblivion following the loss of her son.

When ‘Opulence & Eternity’—a solo exhibition of a series of 16 oil paintings by Rukmini—opened at Gallery G on Lavelle Road in Bengaluru on January 19, it marked a new beginning for this 76-year-old descendant of the celebrated painter prince Raja Ravi Varma, ending her self-imposed ‘exile’ of 35 years.

As you walk into the gallery, a life-size portrait of Ravi Varma’s granddaughter Sethu Lakshmi Bayi (1895-1985), exuding opulence, captivates you, and the heavily bejewelled men and women of ancient dynasties on canvas take you back in time.

“I painted grandmother’s portrait by visualising her in her younger days, perhaps the 1920s, when she was queen of Travancore. I consulted photographs, yet made her pose (in her old age) to get the right skin tone and features,” says Rukmini.

The flawless skin of the characters and their magnificent jewellery are perhaps the hallmark of this artist. “When light falls on human skin, there are many tonal values, which are absolutely fascinating. I depict jewellery made of gems as they attract cosmic rays, which benefit humans and exude positive energy. I undestood the reason our gods and goddesses wore gems and jewellery,” says Varma with childlike enthusiasm.

Rukmini started painting in realist style at a time when avant-garde and abstract art were catching people’s imagination. In 1973, she held her first solo in Bengaluru, inaugurated by Governor Mohanlal Sukhadia, followed by another at Lalit Kala Akademi in Delhi, opened by President V.V. Giri in 1974. There followed a series of exhibitions in Europe, as her popularity soared. ‘Flesh and Gems’, a series portraying nude women in mythological settings, created a sensation and, at the same time, irked the orthodoxy.

The artist still wonders what was offensive about her art.

“In the beginning, I painted nudes not to create a sensation, but because every artist starts there. Abroad, the studios are filled with nudes as human anatomy is the starting point for artists, like it is to people who study medicine. Angry reaction to my work is shocking because our temples too depict nude forms. You need to transcend these barriers,” asserts Rukmini.

Her current series springs a surprise—a nine-foot canvas with life-size figures of the Hoysala prince Vishnuvardhana and dancer Shanthala. What is intriguing is that Varma had painted the two together from visions she had, and only later did she learn from a historian friend that it was a true instance from history.

“History was never my forte. I started getting visions early in life, of ancient civilisations, which compelled me to paint. I only saw the young prince and a dancer in my vision,” says the artist.

For someone who spent her childhood in splendour amid kings, queens and nobles, the unusual experiences are not just a figment of imagination, she reasons.

Recalling her days at Satelmond Palace, she says, “Painting came naturally to me. But in the palace, painting was considered a distraction as academics was more important. However, I was exposed to art as I flipped through catalogues of international artists like Rubens, Rembrandt and Caravaggio.”

In 1949, Maharani Lakshmi Bayi’s eldest daughter, Lalithamba Bayi, and her husband moved to Bangalore with their three children—Rukmini, Uma and Parvati (the other four children were born later). The family had purchased a house, where Rukmini continues to live with her 101-year old father, Kerala Varma. 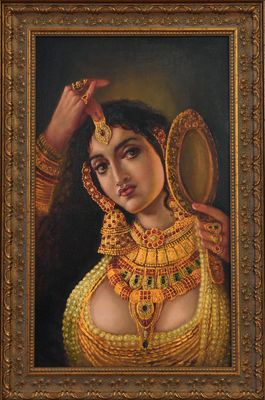 Ethereal charm: A painting of a bride at the exhibition in Bengaluru.

Rukmini attended Baldwin’s girls school, did her intermediate at Mount Carmel College, married a distant relative, Devi Prasad, and was a popular figure in Bengaluru’s social circles. She trained in dance under legendary U.S. Krishna Rao and his wife Chandrabhaga Devi, but gave it up owing to family pressure, and became interested in painting. Then tragedy struck Rukmini. She lost her youngest son Ranjit (20) to an accident in 1988. She became a recluse, but continued to paint. Her estranged husband Devi Prasad suffered from asthma and later succumbed to lung cancer, and her mother died in 2008.

“For the last 30 years, I have gone through a period of deep meditation and prayers. I was completely cut off from the outside world,” she says. In August 2015, Rukmini established the Raja Ravi Varma Foundation (RVF) along with Gitanjali Maini, founder of Gallery G.

Raja Ravi Varma was fondly called “Artist Appuppan” (artist grandfather) by Rukmini and her siblings. “There never was any pressure to carry forward his legacy. Painting was always part of me and as a child. Without any formal art education, I picked up a brush and started painting,” says Rukmini, adding that the non-profitable foundation hopes to revive little-known art forms.

Says Gitanjali, “Ravi Varma was known for oil paintings and we will go to where the paintings are, the Mysore and Baroda royal families, which patronised his art. The family legacy will continue, as Rukmini will help us fill in voids, as will her son Jay Varma, a pencil artist who is studying oil paintings now.”

Gitanjali marvels at the mastery and commitment of the artist, saying, “At her age, she works long hours in her dimly-lit room, unlike in a modern-day studio. She sits in an armchair mounted atop a teapoy to paint the larger canvases, which is an amazing sight.”

While controversies surrounding the treasures of Sri Padmanabhaswamy temple, in Thiruvananthapuram, continue to hound the family, Rukmini enjoys her anonymity. “Bangalore gave us a chance to be ourselves, without any titles. In fact, I came to know a lot about my family only after reading the biography,” she adds, referring to Manu S. Pillai’s ‘The Ivory Throne: Chronicles of the House of Travancore’.

Her next show will be on the influence of spiritualism on her art, which she says has deeper meaning and significance.