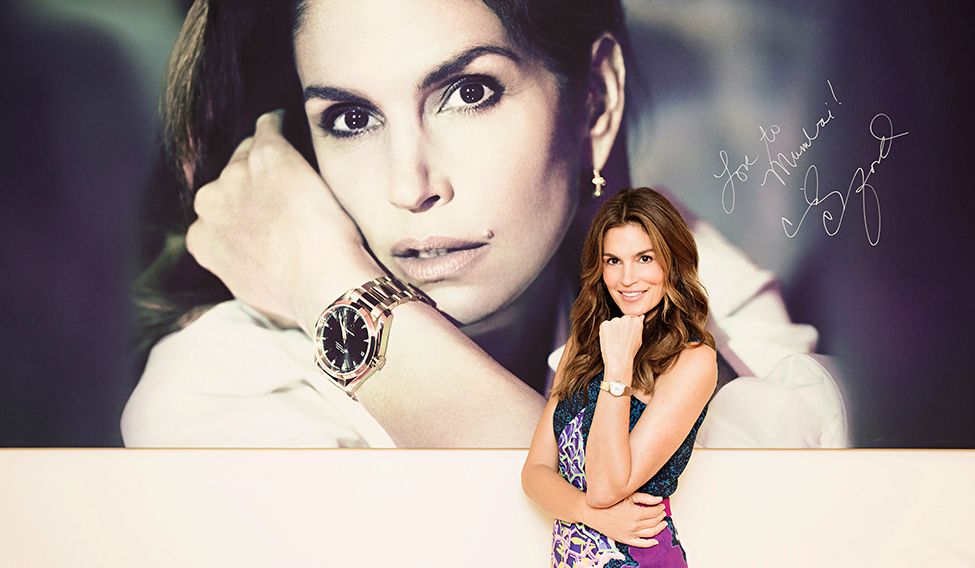 Brand value: Cindy Crawford at the launch of the Omega Constellation Plume in Mumbai.

Cindy Crawford, who will turn 50 next year, will be coming out with a book on her ramp days and beyond

The gentle pitter-patter of the rain on large french windows is threatening to get severe. With its deeply overcast skies, the swelling sea and incessant traffic woes, Mumbai has already overwhelmed Cindy Crawford, the supermodel from sunny Malibu in California. “Oh wow! Do you think it might just stop raining today? I want to take my children out to the Elephanta Caves. I don’t want to just come and be in the hotel and leave. It is not like they get to see India often, I want them to at least get a taste,” she says, setting her eyes on the dark grey clouds enveloping the Gateway of India.

It has been 17 years since Cindy first visited India. It was a different age then. The 'original supermodel', Cindy wasn't just known for her glamorous cover shoots for top magazines, she was one of the first few fashion icons to have established herself beyond the runway. Her dark features—caramel hair, brown eyes and that memorable mole—complemented her wit. She was the face of Revlon, a TV show host and Pepsi's most popular celebrity endorser.

Cindy has shared a long, cherished association with Swiss luxury watch brand Omega. “I have been longer with Omega than with my husband and the best part is that we don't fight,” says Cindy, who launched the Omega Constellation Plume in Mumbai recently. “The brand has allowed me to evolve over the last 20 years. I started with them as a model, today I am a mother and a businesswoman. They embrace what I bring to the table.”

Strutting around in hot pink stilettos and a figure-hugging multicoloured dress, Cindy is every bit a stunner one has always imagined her to be. She is gorgeous but completely unassuming, instinctive and absolutely endearing. She may have endorsed some of the world's most expensive luxury brands, but when it comes to her personal style, Cindy isn't really a 'label queen'. “I don't care about brands,” she says, flipping over her hot pink shoe to check out the 'Kurt Geiger' label on it. “Be it cosmetics or apparels, I am not all for designer wear. I think sometimes when you are not working you just want to be in a pair of jeans and T-shirt. I live in Malibu, so that’s the style out there.”

An avid reader and travel enthusiast, Cindy is a social crusader, too. Her most memorable trip in recent times was to Peru, where she took her daughter to the Flying Eye Hospital by Orbis. “I always thought if I go to Peru, Machu Picchu would be the highlight of my trip. But when I went to Trujillo, which is where the eye hospital is, and spent time with the doctors, volunteers, nurses and patients, it was incredible. The whole thing made a big impression on my daughter,” says Cindy. “We spent an entire day with these girls who were waiting for their surgery. The next day we came back and they had the bandages taken off. There was this girl who didn’t want to open her eyes and when she did, I was the first person she saw. She just went, ‘Ah!’ It was just so heartwarming.”

Cindy, who also appeared in Taylor Swift's recent music video Bad Blood, will turn 50 next year and the occasion will be marked by the release of Becoming. “The book is autobiographical,” she says. “I thought the best way to turn 50 is to write a book that compiles essays and photos about my experiences. The book is by Rizzoli and has about 150 images, right from the time I started modelling in Chicago to recently. Some haven’t been published before. It is the best of photographers Helmut Newton, Herb Ritts, Steven Meisel—all greats in my opinion—and then the essays, lessons I have learnt. Taking chances, learning to say no, how I feel about ageing, becoming a mother, all these things. There is a bit of nudity in there, but I kept it such that I could give it to my own children. It has been a great journey for me to look back and reflect.”

Cindy says social media is the best thing to have happened to models these days. “Earlier, models were just two-dimensional; they didn’t have a voice,” she says. “Social media has allowed models like Coco Rocha and Cara Delevingne to have a personality and a voice. I think that is helping models to become more like celebrities in the fashion world. Fashion is getting huge.... I mean look at Kim Kardashian.”

As we wrap up the interview, Cindy is still hopeful it would stop pouring. “I really hope I get a chance to step out,” she says. “I like watching TV shows like Game of Thrones. In fact, the moment I saw the Gateway of India, I told my son that it looks like the temple of the Many-Faced God.”