In pursuit of the Daytona, the company's most collectible watch

On a dreary November evening in Geneva three years ago, 400 passionate collectors huddled up in a salesroom to witness Christie's most rigorously curated watch auction. “The idea was to celebrate the 50th anniversary of the iconic Rolex Daytona with 50 exceptional pieces produced by the company,” says Aurel Bacs, a star auctioneer and former head of the watch department at Christie's. “It was a historic event. All 50 Daytonas were sold for a total of $13 million (Rs 86 crore), including a stainless steel version from 1969 which went for $1 million (Rs 6.6 crore); an absolute record price for any Daytona ever sold at an auction.”

This was hardly the first time a Rolex Daytona created such frenzy among its fans. It is one of the most coveted chronographs, named after the Daytona speedway in Florida, and has been an unattainable status symbol for aficionados for over five decades.

With its three subdials for timing laps, the Daytona turned out to be a racing-inspired triumph for Rolex in the 1960s. Spotted on the wrists of actors Paul Newman and Daniel Craig, and musicians Adam Levine and Eric Clapton, the storied chronograph has had collectors going down the rabbit hole on many occasions. Inscription on the case back of the watch awarded to the winner of the endurance race.

This year, as Rolex announced the launch of the fourth iteration of this classic chronograph, retailers got into a frantic rush to book orders for their most loyal customers across the globe. However, even if you have the money (Rs 8.11 lakh approximately) and the right connections, you may not be able to get your hands on this one. Touted as the most collectible watch ever made by Rolex, the new Daytona is far more limited than its previous versions and nobody knows the number of pieces the company would dole out to its dealers worldwide. “Collectors are just dying to own the new Daytona,” says Raunaq Kapoor, the proprietor of Kapoor Watch Company, the authorised retailer for Rolex in India. “We are getting inquiries every day and the waiting period is almost two years. It is not like an iPhone or a BMW that you can buy any time. It is a real treasure.”

Inspired by the first Daytona with black Plexiglas (a plastic) released in 1965, the new model features a corrosion-resistant, scratch-proof cerachrom bezel in black. Each piece comes with a five-year warranty and is a certified 'Superlative Chronometer' (a phrase used by the company)—in accordance with the new guidelines set forth by Rolex in 2015—which brings the accuracy to -2/+2 seconds per day.

While the market for rare Daytonas reached fever pitch with the Christie's auction in 2013, the best, according to experts, is yet to come. Pining for unobtainable, limited models from Rolex, collectors have contributed to an unbelievable growth for the brand in the past decade. “There are three factors that work for Rolex in the auction market—rarity, design and brand equity,” says Remy Julia, a watch specialist at Christie's. “The prices for vintage watches from the brand have more than doubled in the last few years. The anxiety levels over the new Daytona are high because it is limited in number and is a bona fide piece of investment. It is a modern watch with a vintage look, is of great quality and has an absolutely affordable price. If you own a modern Daytona, you own a part of that success story from Rolex. As a 'tool watch' sported by some of greatest race car drivers, it speaks to a larger audience than an art deco watch. It is for people who understand design and appreciate art.”

Though the Daytona was not one of the first chronographs to hit the market, it caught the attention of racing enthusiasts for its rugged design, legibility, tachymeter scale and the stopwatch function. The three small dials, giving 60-second, 30-minute and 12-hour read-outs on the face of the watch, made the watch ideal for timing everything from short sprints to long races. It was a welcome break from those dainty little chronographs that dominated the brand's collection between 1920s and 1940s. 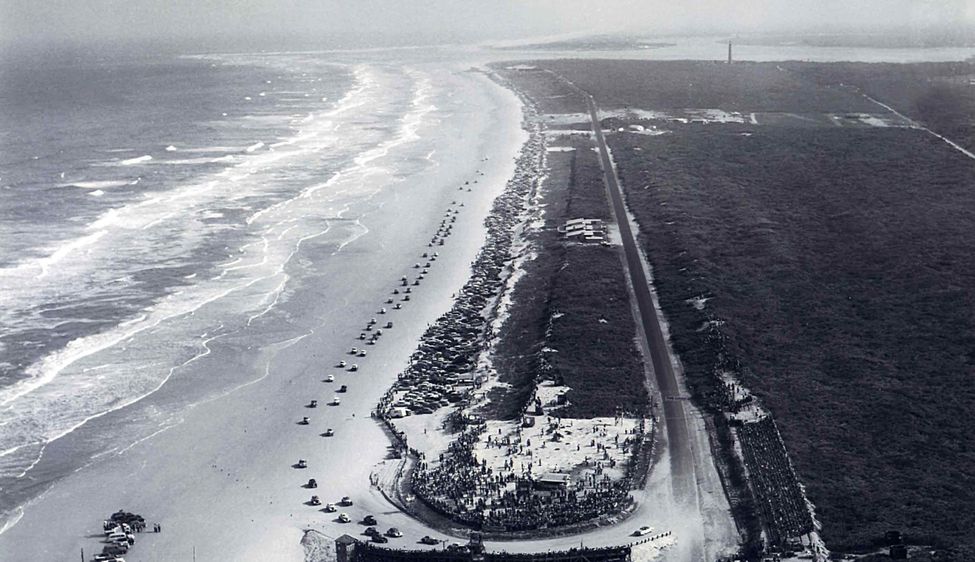 The watch got its biggest publicity boost through Sir Malcolm Campbell, a racer who broke the world land speed record nine times between 1924 and 1935, setting five of them on the beach at Daytona. From 1930 onwards, Campbell had been wearing a Rolex Oyster, and it was on his wrist during this record-breaking exploit. He even wrote a thank you letter to Rolex in 1931, telling the company he was very impressed by his Oyster’s durability. Rolex began sponsoring the 24-hour endurance race in 1963 and, to this day, the winner of the annual race receives that year's model chronograph.

Among its many famed patrons, the Daytona was widely recognised on the wrist of actor and race car driver Paul Newman, who was gifted a Cosmograph Daytona by his wife Joanne Woodward in 1969. The particular model had an exotic dial, distinguished from the standard one by considerably smaller hour markers and a black minute-track to contrast with the light-coloured centre. Over the years, collectors have yearned for several “Paul Newman” versions of the Daytona. Mainly identified by the contrastingly coloured seconds scale along the dial’s periphery, the Paul Newman Daytonas can change hands at auctions for several thousand dollars. In fact, actor Orlando Bloom picked up one of the Paul Newman Daytonas for $5,000 (Rs 3.3 lakh) a decade ago. The watch is estimated to be more than $1,50,000 (Rs 1 crore) in value today.