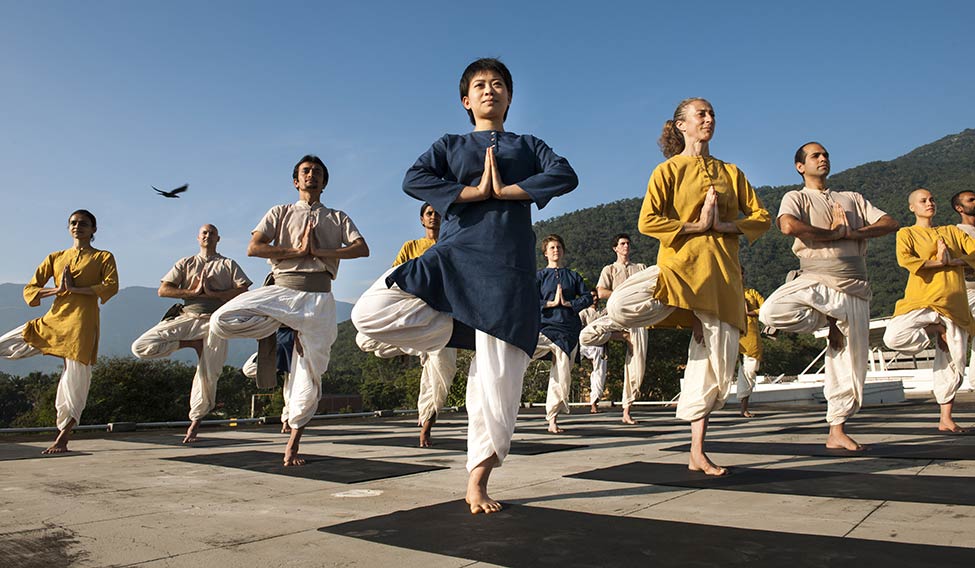 The 200-acre Isha Yoga Centre boasts the world’s largest bust—of Adiyogi, which was inaugurated by Prime Minister Narendra Modi in February. Among the centre’s hatha yoga programmes is the highly challenging teachers’ training course that is 21 weeks long. There are also programmes to help improve health and achieve internal balance. Said Rahul Dubey, a volunteer, “We offer yoga in a very non-religious way.”

Dhyanalinga, the focal point of the centre, has a linga made of mercury. Its energy, they say, facilitates inner transformation, filling people with complete peace and unrivalled zeal. Before going to the Dhyanalinga, people cleanse themselves—men at Suryakund and women at Chandrakund, both of which have three lingas rising from water. Close by is the Linga Bhairavi, declared by the Sadhguru as the ultimate form of the mother goddess.

Said the Sadhguru to THE WEEK, “Though obscured by hundreds of years of foreign occupation and distorted by the aggressors, the relative peace, contentment and harmony of the Indian people and society are clearly the fruits of the carefully crafted spiritual process.”

This is a spiritual master who rides motorbikes and plays golf, an eloquent graduate in English literature. Born in 1957, he was a daredevil who caught snakes for pocket-money. At age 25, he rode up the Chamundi Hills in Mysuru, sat on a rock, lost consciousness and woke up days later as a wise one.

In 1983, the Sadhguru conducted his first yoga class with seven participants in Mysuru, and the Isha Foundation was born in 1993. Now the foundation has 250 centres and 7 million volunteers worldwide. It has been his mission to take mere mortals to the deepest layers of yoga which only the Himalayan masters knew.

Said the Malayalam actor Manju Warrier, "I felt energised in his presence. He instilled a lot of confidence in me and showed me that each of us can turn every moment to a special one.” At the Kerala Literature Festival in Kozhikode in February, she had taken part in a conversation with the Sadhguru.

Wandering through the place, I found myself in a huge hall, where a hundred people from 40 countries—China to Australia, Afghanistan to the US—were taking instruction on hatha yoga. Devotees from China wore earphones for the translation. Isha Yoga programmes are offered throughout the year here.

Just outside the yoga hall, I met Swami Kallola, 36, an American from Michigan who has been here for 11 years. A friend of his had introduced him to yoga at age 19 to dispel a sense of dissatisfaction in life. “It took me some time to warm up to yoga,” he told me. “After visiting the Isha Centre and being a part of it, every aspect of me was becoming more sweet.” It was the Sadhguru who named him Kallola. “It means wave of joy,” he said, flashing his winning smile.

“People from abroad have a deep respect for Indian culture,” he said. “Once yoga touches your heart, you become more open-hearted and inclusive”. So I asked him why the Americans had elected Donald Trump, a president whose policies were restrictive. Didn’t yoga and the Sadhguru have any effect in the US? “We have so many volunteers in the US and yoga is getting very popular there. You need to realise that more than half the people didn’t vote for Trump,” Kallola said. “So the situation is not as bad as one imagines it to be.”

The Isha Institute of inner-sciences in Tennessee in southeastern USA is spread over 1,300 acres. Besides yoga, it offers opportunities for hiking and mountain biking on forested routes. The basic meditation is taught in 35 cities across the US and Canada.

As dusk fell, I could hear the leaves in the peaceful quiet. I ambled towards Hanine Baroud, yoga teacher and Isha’s coordinator for Africa and Lebanon, an enthusiastic traveller who has been here for 11 years. She said Isha was active in Kenya, South Africa, Uganda and Tanzania. “In January this year, we opened the Sadhguru School in western Uganda. We have 150 students, from age 4 to 8,” said Hanine. As part of the Project Green Hands, there was mass plantation of trees in Africa. “It is a myth that Africa has so many trees and wildlife cover. There is a lot of deforestation happening in Africa,” she said.

Another interesting programme is the Isha Gramotsavam, a celebration of the rural spirit. Started two years ago, it has 7,680 players and 640 teams in 32 locations in Tamil Nadu participating in different sports. Last year, cricketer Sachin Tendulkar was the chief guest at the final event. He walloped tennis balls bowled by the Sadhguru.

As I made my way out, I chanced upon a newspaper clipping about an event attended by the Sadhguru recently in Dubai. He was quoted in it, “Human beings try to handle a complex, intelligent machine—their brain—without following a user’s manual. Often they are unable to handle their own intelligence.” Dwell upon it, mankind.