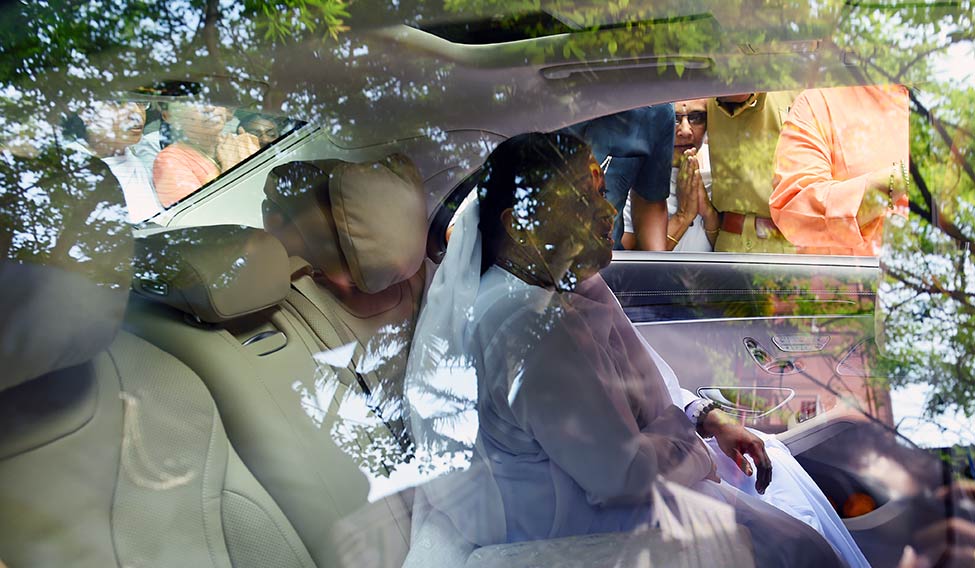 Big-hearted healer: Amma on her way to the US; people craned their necks for a glimpse of her as a Mercedes took her to the airport | Sanjoy Ghosh

Dressed in a white sari, Sun Shin from Beijing was an enchanting stillness in the main prayer hall of Mata Amritananda-mayi’s ashram at Vallikkavu in Kerala. “I cannot describe the feeling I had after meeting Amma last July,” the young tour operator told me. “I want to understand Amma even deeper.”

Sun said Amritanandamayi had many followers in Beijing. “Amma’s works have been translated into Chinese,” she said, her eyes gleaming.

A gentle wind in the 100-acre ashram circled the pink buildings that rose above a forest of coconut trees close to the growling sea. Thousands of devotees from all over the world were at the ashram, singing bhajans and chanting prayers. The podium in the hall had a large photograph of Amma, a fisherman’s daughter who had dropped out of primary school and become a hugging healer of restless souls.

Breakfast was being served in a nearby hall. A few yards away, there was a commotion. “Amma is about to leave for the US,” said an attender. Within minutes, the police cordoned off the place; Amma has Z category security. Everyone was told to stand in a queue. A hush descended. People craned their necks for a glimpse of her and the Mercedes that would take her to the airport.

And, she came, dressed in white, with ash on her forehead. She hugged a few and held the hands of a few others, and as the car glided away with her, her face glowed. Tears of joy trembled in the eyes of some devotees.

“Just seeing Amma makes people happy. You can discuss anything with Amma. Yesterday some Brazilian devotees told her about forest fires swallowing their land,” said Amrita Swaroopananda Puri, her chief disciple and president of Amrita University. “Love and compassion are the two fundamental principles of life. Without them, life will always be unfulfilling, regardless of our sphere of action.”

Amma had gone abroad for the first time in 1987. Now, she will be in the US and Canada for more than a month, visiting eleven cities. There would be guided meditation in each of these cities, and everyone would pray together for world peace.

“Not just Americans, but all people in general are longing to experience true love. There is an inner thirst to find someone who will lend a compassionate ear, so that they can pour out their heart,” Amma told me in an email.

Swaroopananda Puri said devotees abroad were teaching IAM Meditation [Integrated Amrita Meditation Technique] and Amrita Yoga. “They do this across the US for people who want to learn and for business. They even teach it at jails and juvenile detention centres,” he said.

Located 90km from Thiruvananthapuram, Amma’s ashram in Amritapuri was built more than 30 years ago. It was in a cow shed that she met her early devotees. Now, many of her devotees are from Australia, Europe and the Americas.

Every year Amma travels to different countries to offer insights on global issues and guide people towards emotional fulfilment. Said Amma: “We have speakers, poets and writers who talk and describe love in beautiful flowery language. But words without heart have no effect. In reality, love and compassion cannot be taught. They can only be expressed through soul-transforming actions. What today’s world needs is inspiring examples—perfect role models, people who can walk the talk.”

In Africa, Amma has ashrams in Kenya, Mauritius and Reunion Island. In the US, her ashrams are located in states such as California, Iowa, Michigan, New Mexico, Arkansas and Washington, DC. She has a few ashrams in Brazil, Chile and Mexico.

Her Amrita Institute of Medical Sciences and Research Centre (AIMS) is planning to establish telemedicine centres in Nepal. Last December, her doctors organised an eye camp in Burkina Faso and performed 219 cataract surgeries in nine days in the second largest district of the country, Bobo Dioulasso.

Said Dr Debasweta Purkayastha, a psychiatrist in Bengaluru who completed her postgraduation in AIMS recently: “Amma was always considerate to the demands of the students. All postgraduate students at AIMS are taken to Amma’s ashram for her darshan. She talks to each one of us and asks us about problems we face at the hospital. Some years ago she agreed to start a non-vegetarian canteen at the ashram after students demanded it.”

In France, Amma has ashrams in Paris and Toulon. In 2008, she asked her devotees in Toulon to adopt 50 trees each, so as to develop a deep sense of unity with nature.

Said Porret Pascal, a Swiss who lives in France: “Amma has visited France many times. I have come here to Amritapuri to know Amma even more. My family and I have had a wonderful experience here. It has changed our notion about the world.” Pascal said Amma’s teachings would help people in Europe to welcome immigrants with open arms, rather than detest them. “Amma is already popular in many countries in Europe. Her teachings would help change the mindset of people in the dangerous times that we live in,” Pascal said.

In North America, Amma runs the Mother’s Kitchen, a programme that feeds 1,50,000 homeless people annually. Amrita Yuva Dharma Dhara (AYUDH), an international youth movement founded in 1985, is active on all continents. It lets young people to combine universal values and help establish a future of hope and peace. In India, AYUDH gives free tuition in maths, English and value education to children from slums. Devotees worldwide participate in a prisoner-outreach programme called the Circle of Love Inside, where they become pen friends with people who lack the support of friends and family.

Said Amma, “There is war and misery everywhere in the world. It is impossible to change that in one stroke. But individuals can be transformed through love and compassion. I have tremendous faith in that because I see that transformation happening around me every day—a very tangible change.”

Former Kerala chief minister Oommen Chandy said that Amma had done a lot for the poor. “I have met Amma many times. I am her admirer. The world needs her prayers and efforts more than ever before,” he told me over the phone.

At the ashram, sans Amma, it was business as usual. Some devotees stood near the souvenir stand that sold books and DVDs on Amma. Some others were leaving the ashram. They will reappear when Amma returns, like birds flocking to their nests.