Is Congress's pitch for second capital an election ploy? 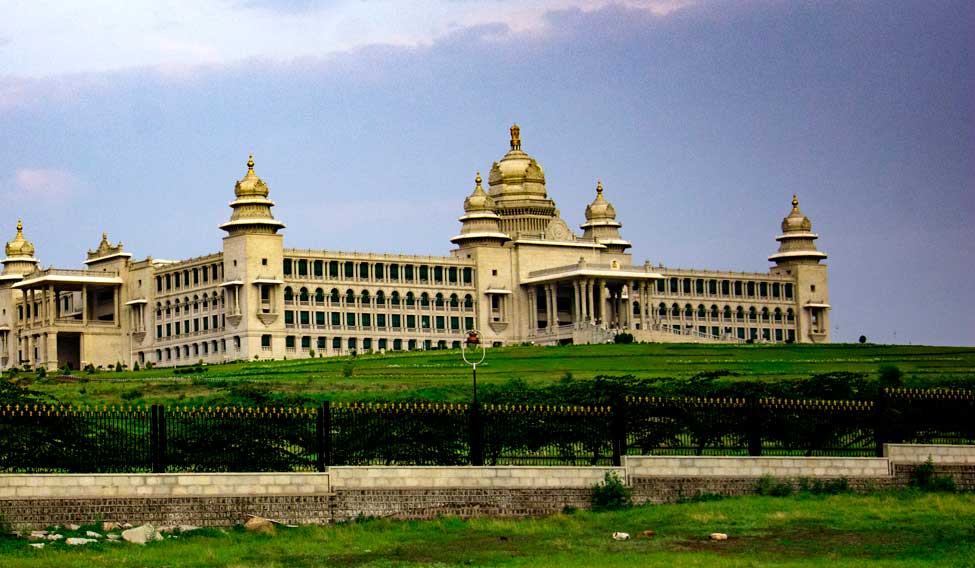 Is the ruling Congress trying to position itself as a pro-Kannada and pro-Bengaluru party ahead of the crucial Assembly elections? The recent proposal of Industries minister R.V. Deshpande to the Centre to declare Bengaluru the second national capital, infuriated the Bengalureans who are grappling with crumbling infrastructure and lack of basic amenities. The moment the proposal became public, the minister was trolled on social media by those who felt the government was being overambitious when it had better things to focus on.

While some industry leaders endorsed the proposal, they, too, were not spared by the trolls. “Bengaluru is already the science capital, start-up capital and technology capital of the country. It is the best choice for a second capital Karnataka has created Belgavi as its second capital,” tweeted Biocon founder Kiran Majumdar Shaw.

Kiran Nadkarni, a venture capitalist echoed the popular sentiment when he tweeted, “Let Bangalore first get its act together on critical infrastructure issues. Thereafter let us boast of its ability to be second capital. Also let us not allow the city to be invaded by more politicians. They will ruin the city's pride as technology capital.”

A closer look at the proposal reveals that the pitch for a second capital has little to do with upgrading the city to global standards but to do with the Congress government's attempt to position itself as the party that is pro-Kannada and pro-Bengaluru. After mooting a separate Kannada flag for Karnataka, and supporting the fight against “imposition” of Hindi by Kannada activists that resulted in a three-language policy on the Metro trains, the Congress is now hoping to corner the Centre over the second capital issue. While most of these issues were opposed by the BJP stating it went against the spirit of “United India”, the Congress tried to paint the Centre as anti-Karnataka on several occasions including the Mahadayi water sharing controversy, and the IT-city missing out the smart city tag for two consecutive years till it finally made it to the list of smart cities in the third attempt last June. A disappointed Congress government had announced that it would create its own funds, accusing the Centre of neglecting Bengaluru.

In his letter to Prime Minister Narendra Modi, Deshpande emphasises on south India's “rich and complex history of development and culture” and highlights the “futility” of having a “distant administrative system”. Pushing for setting up a Supreme Court bench and the Union Public Service Commission office in Bengaluru, too, the minister rakes up the issue of north-south divide, which has been discussed for long in the corridors of power.

B.R. Ambedkar, architect of the Indian Constitution, too, had spoken of a second capital in the south to overcome the north-south divide. He had favoured Hyderabad as the winter capital, due to its accessibility. Ambedkar felt Delhi was not only inconvenient to people from south owing to its distance but too harsh in terms of the extreme weather conditions. He also pointed out that Delhi was “vulnerable” to attacks due to its proximity to the international borders. However, the southern cities, which are bulging in their seams with rapid urbanisation, migration and infrastructure deficit have shied away from pitching for the second capital.

Deshpande noted that Bengaluru is free from natural disasters like oceanic tidal waves, hurricane, earthquake and extreme weather, and was at a safe distance from the borders. 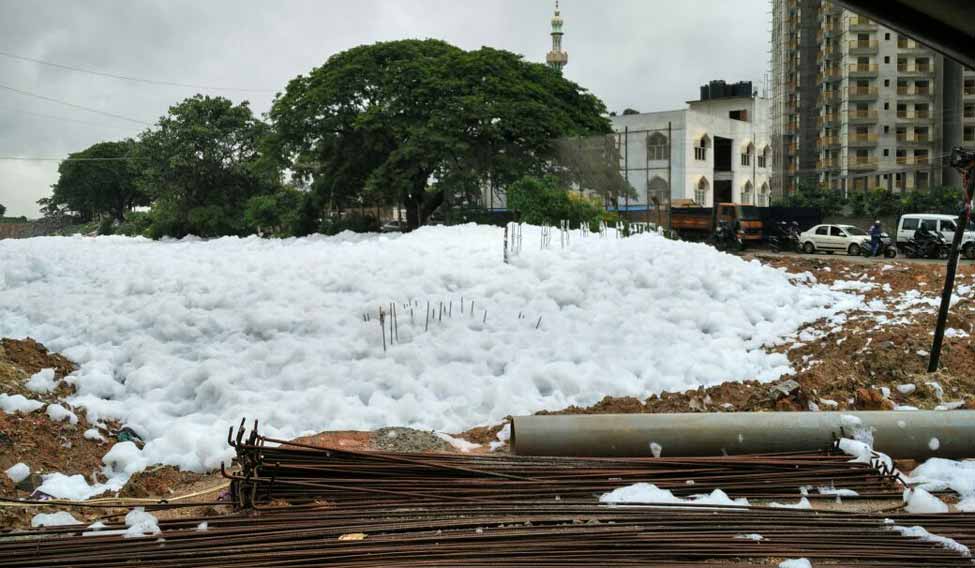 The citizens have dubbed the proposal as fanciful and unrealistic. Bengaluru may be the knowledge and startup capital of India—the Silicon Valley of India aspires to be the world's largest IT cluster by 2020—but the city is grappling with serious dearth of infrastructure, potholed roads, traffic bottlenecks, drinking water deficit, garbage crisis, frothing lakes, flooding of city lanes and residential localities due to encroachment of lakes and storm water drains and absence of an integrated public transport system among others, lament citizens.

The civic body identified as many as 15,900-odd potholes to be repaired. The frothing lakes due to industrial effluents being mindlessly flushed into lakes and water bodies has drawn flak from the National Green Tribunal, too.

An IISc study reports that the city has seen a 925 per cent increase in built-up area (concretisation) between 1973 and 2013. Also, there has been 79 per cent decline in water bodies as unauthorised constructions and encroachment of lake bed and storm water drains have put the city under severe stress as roads and low lying areas get inundated even if the city receives as little as 30 mm rainfall for 30 minutes.

Five million vehicles on Bengaluru’s roads have not just affected quality of life in the city but affected the economy as well. While MNCs are shifting out of Bengaluru, the residents are spending on an average 3 to 5 hours commuting to their workplace and back home.

The garden city earned the reputation of a “garbage city”, which made global headlines in 2012. But there is little change in the way the heaps of garbage (approximately 3,700 tonnes per day) are handled. The dumping of garbage into the landfills in the outskirts of the city is now being opposed by nearby villages. In the absence of a garbage disposal system that is both scientific and transparent, the city is held to ransom time and again by the garbage mafia, say experts.

Katyayini Chamaraj, a civic activist, laments: “The waste segregated as wet and dry waste at homes is again mixed by the collection agencies as there is no infrastructure to collect segregated waste. While 65 per cent of the total waste is segregated at homes in the city today, less than 15 per cent is reaching the processing site. The interventions to reduce waste by promoting eco-friendly packaging (extended producer responsibility), or adoption of zero waste policy by encouraging and incentivising recycling of waste, are still a far cry. The obsolete system of trucking and dumping of non-segregated waste in landfills is no longer an option with villages erupting in protest. Scientific landfills, waste recycling and processing is the way forward. But subsequent governments have failed to escape the stranglehold of the garbage mafia, which is opposed to any reforms.” 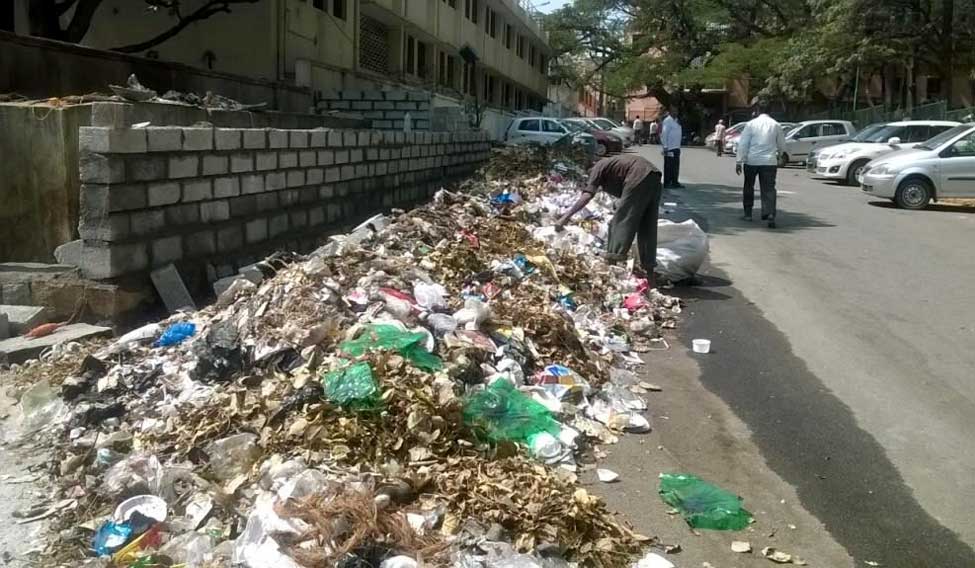 Garbage strewn on the road, near MS Building | Kathyayini Chamaraj

“Bengaluru made it to the Smart Cities Mission in June 2017, in its third attempt. However, the BBMP's approach to remodel old markets, bus stations is futile as the city does not need islands of excellence but a radical restructuring of the entire city. Why not focus on 24/7 water supply, local garbage processing plants in every ward, and mass public transport. Can the city accommodate the MPs and the central ministers and the secretariat?,” asks Chamaraj.

Strangely, the government pitching for Bengaluru as top contender for the second capital is ironical as it contradicts the state government's earlier strategy to decongest and declutter Bengaluru. Over the last couple of years, at the global investors' meets (GIMs) hosted by Karnataka, government has seen greater pitch to “look beyond” Bengaluru, promising incentives for investors opting to invest in tier-2 and tier-3 cities. However, most investment proposals are only on paper as the poor infrastructure and dearth of skilled workers has dissuaded investors from moving away from the state capital.

Most importantly, Karnataka's efforts to upgrade Bengaluru have miserably failed. In 2006, the H.D. Kumaraswamy’s cabinet (JD(S)-BJP coalition) dreamed ‘big’ and pushed for the Greater Bangalore—an amalgamation of Bangalore Mahanagara Palike (100 wards) with eight urban local bodies and 101 surrounding villages to create Greater Bangalore or Bruhat Bengaluru Mahanagara Palike with 198 wards. While, the intention was to scale up infrastructure in the peripheral areas, it ended up escalating the land prices and did little to upgrade the neglected wards.

Again, in April 2015, the Siddaramaiah government came up with a proposal to trifurcate the BBMP, saying “Small is beautiful. The Siddaramaiah’s cabinet passed an ordinance seeking to amend the Karnataka Municipal Corporation Act to dissolve the BBMP and to pave way for trifurcation for “balanced development”.

The BJP had opposed trifurcation calling for 'Akhanda Bengaluru' (undivided Bengaluru), Union minister of fertilisers and chemicals Ananthkumar had said, “Kolkata was unified after the division of its municipal corporation, while people in Delhi are demanding unified municipal corporation as trifurcation has led to many problems. Mumbai was bifurcated as it has double the population of Bengaluru. It is not a good idea to divide the city.”

While a second state capital is not a new concept as Himachal Pradesh (Shimla-Dharamsala), Jammu and Kashmir (Srinagar and Jammu), Maharashtra (Mumbai-Nagpur) and Karnataka (Bengaluru-Belagavi) have two capitals, it has proved to be more of a liability than convenience in Karnataka.

The Suvarna Vidhana Soudha, the legislature building built at Belagavi in 2012, has been hosting the winter session of the Karnataka assembly. But it has turned into a big white elephant and a strain on the state exchequer as it was built at a cost of Rs 438 crore, but functions only 10 days a year.

The SVS was built by the BJP government to send out a strong political message to the people of North-Karnataka, especially the border districts, as border disputes and a sense of alienation was peaking.

The magnificent building standing tall in a sprawling campus spread across six acres on the Pune-Bengaluru national highway made people hopeful that the region would assume the importance of a second capital and foster development. But five years later, the building has turned into a dead asset as the government spends Rs 4 crore a year for its maintenance, while the winter session alone costs around Rs 30 crore, but has failed to make it functional all 365 days a year by shifting major departments and offices owing to resistance from both senior bureaucrats and the ministers. Even the plans to generate revenue by building a five-star hotel, a theme park on the Suvarna Soudha campus has hit a dead end.

Your form could not be submitted.
This browser settings will not support to add bookmarks programmatically. Please press Ctrl+D or change settings to bookmark this page.
Topics : #Congress | #Karnataka | #Karnataka election 2018 | #Bengaluru