For Congresspersons all over the country, including this writer, the suspense over who will lead us into the next general election is over. Perhaps more importantly, our potential partners in a grand alliance to end this nightmare of Modi rule also now know where final decisions will be taken in the Congress, where the buck will stop.

We believe we have eighteen months to get our act together. But, we will have to guard against the possibility that Modi, like Vajpayee before him, might decide to call the election early, making 2018, rather than 2019, the decisive year. Time, in short, is running out. The removal of all uncertainty over leadership is, therefore, something of a war cry. The shankh has sounded.

It will be, truly, an election for the soul of India. For if Modi wins another term, he will see no reason to be inhibited about unleashing on the nation the total Hindutva agenda that in his first tentative term he has kept mostly on the back burner. But, if the alliance prevails, then the “Idea of India” that won us our independence will resume its due place as the running motif of nation building in contemporary India. Indeed, even if the alliance were to seriously dent the current majority of the government, the India we fought for, and assiduously nurtured over these last seven decades, might yet be saved. That is why the leadership of the Congress is a concern, both of the Congress and of all the secular forces perturbed by what we have seen these last three-and-a-half years, and what it augurs for the future.

Rahul Gandhi assumes the stewardship of the party at a juncture where there is a sudden upswing in his standing. This upswing is partly the result of the crumbling image of the Modi-Shah duo, whose many mistakes of policy, particularly the eccentricities of their economic policy, are impacting negatively on the people. For Rahul, the positive factor is widespread appreciation of his coming into his own, wading into battle in Gujarat with verve, wit, and compelling argument. He has also demonstrated that he has the magnetic political ability to attract the iron shavings of varied discontents and satisfactorily negotiate with them their myriad demands, neither abjectly yielding nor stubbornly dismissing their many claims.

That sets him apart from the image hitherto sought to be imposed on him by the Modi-Shah duo and their trolls. Their jibes about dynasty, yuvraj, and shahzada have begun to ring hollow even as Rahul’s repartee is now beginning to find its mark in the social media. 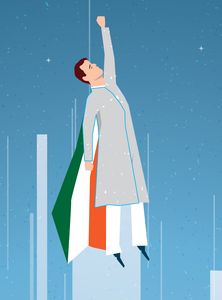 The time is, therefore, ripe for Rahul to work on the substantive programme he has on offer for his generation. Over the next twelve months, the nation would expect him to lay out his thoughts on issues of governance ranging over the entire spectrum of the nation’s concerns—holding India and Indians together; anchoring the future of the nation on its great civilisational past; keeping hearts and minds open; steering the nation away from prejudice and discrimination; ending the corrupting influence and corroding domination of a few select private players over national policy; meeting the urgent employment needs of crores of young people; regenerating growth while prioritising the poor; pulling agriculture out of the doldrums; pushing manufacturing, especially in the nano, mini, small and medium sectors; upholding the hard-won rights of organised labour, even as the unorganised are incentivised and assisted to progressively enter the formal economy.

And, above all, deepening our democracy through effective devolution of development to the panchayats and municipalities to empower ordinary folk in their villages and bastis to become full participants in the making of their own lives.